The Blogs
Alan Rosenbaum
Apply for a Blog
Please note that the posts on The Blogs are contributed by third parties. The opinions, facts and any media content in them are presented solely by the authors, and neither The Times of Israel nor its partners assume any responsibility for them. Please contact us in case of abuse. In case of abuse,
Report this post.

The following blog is not about Donald Trump, the OU and women rabbis, global warming, or the Russian hacking of the Democratic Party’s server. It is not globally significant in any way. It is about inappropriate contact in a public parking lot — not between people, but between two motor vehicles.

On a chilly Thursday morning, I arrived for a meeting in one of Jerusalem’s high-tech parks, drove into the visitors’ parking lot, and made sure to align my tiny Kia Picanto between the white lines. Some forty-five minutes later, I emerged from the building, walked to my car, and was stunned to see that the Kia had been completely surrounded by a Honda to the immediate left, as illustrated by the accompanying photo. The driver had hurriedly parked, encroached onto my parking space, paid no attention to my car, and left me no room to exit without causing almost certain damage to my vehicle.  While most of us are acquainted with the phenomenon of Israeli drivers parking between white lines at all types of angles, taking up two, and sometimes even three spaces, my car had never before experienced this. It was downright unseemly.

Weary and slightly annoyed, I trudged back into the building, and went to the front desk. I told the woman of my travail, and she checked the car’s license plate against the list of registered cars in the building, but it was to no avail. The offending Honda driver was a guest, like me, who had certainly not acted like one.  With another meeting on my schedule, I was in a difficult spot.

What happened next was the flip side of the inconsiderate and rude behavior of the driver who had violated my car. The woman put on her coat, and walked with me to the parking lot. She gazed in amazement at the way that the driver had left his car. First, she spotted a piece of paper inside the man’s car with his name and cellphone number clearly marked. I called the number, but there was no answer — naturally. She then carefully studied the position of the two cars, and began to direct me, in order to extricate my Kia from the grip of the Honda. I had to get inside the car, and as the driver’s door was completely blocked, I was forced to enter from the passenger side, and somehow, hop over the middle. As our cars were almost touching, I flipped my side mirror inward, thus completely relying on her judgment to avoid scraping my car. “Yemina (turn right), V’Kadima (and go forward)!” “T’yasheir et ha-hegeh (straighten the wheel) v’sah achorah (and go backwards)!”

Her staccato instructions were further complicated by the noise of a tractor and bulldozer from a nearby construction site that required her to repeat the instructions, two, and sometimes three times. All the while, two of the construction workers were watching nearby, laughing and pointing at the seeming impossibility of our task. Right, left, forward and back — the driving exercise continued for a good fifteen or twenty minutes, until, somehow, amazingly, I was able to back out of the space with nary a scratch. I profusely thanked the woman for her gracious and selfless assistance, and went on my way. A short while later, the driver of the offending car called me back. Explaining why I had called initially, I raised my voice, and criticized his parking skills, or lack thereof. Expecting a complete denial of responsibility, I was shocked when he sheepishly apologized for blocking my car. He even told me to send him a picture of the two cars. 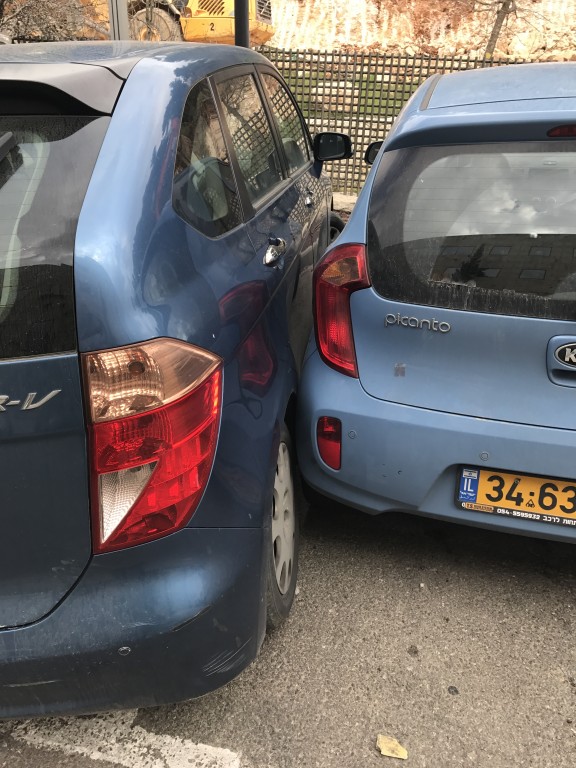 Perhaps Israelis’ ignoring of the white parking lines comes from a deep-seated refusal to conform to the rules of society. After all, some would say that the secret of Jewish survival has been our very non-conformism. On the other hand, a little consideration for others can go a long way. So, to the woman who helped get me out, I salute you. And to the driver who blocked me, I accept your apology.

For my next meeting, I think I’ll take the bus.

About the Author
Rabbi Alan Rosenbaum is the vice-president of Davka Corporation (www.davka.com) one of the world's leading developers of Jewish educational software. He has lived in Israel since 1996, and writes extensively about Jewish life in Israel for the Jerusalem Post, the Times of Israel, and other publications.
Comments
Advertisement