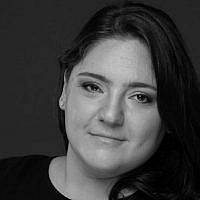 The Blogs
Sivan Gaides
Professional Jew with a multicultural background
Apply for a Blog
Please note that the posts on The Blogs are contributed by third parties. The opinions, facts and any media content in them are presented solely by the authors, and neither The Times of Israel nor its partners assume any responsibility for them. Please contact us in case of abuse. In case of abuse,
Report this post.

It often seems as though the past year has been played out exclusively in the virtual arena. For months on end, my only conversations have been through social networks, people I ‘met’ were accompanied by luminous profile pictures, information was distilled through clickbait, fake news and endless spin, and nothing seemed particularly real. Not that taking a break from the world for a year is necessarily a bad thing, especially when no known lethal pathogens lurk in the cybersphere.

Of course, I wasn’t totally out of the loop: I did manage to travel around Israel, meet with family and friends (outdoors only), and develop deep and intimate relationships with the delivery drivers who brought any product I desired to my front door.

This context helps inform a recent interaction I had with a well-known Facebook personality and moderator of a large group representing Russian speakers in Israel, of which I am a member.

I had recently seen an interesting news item, first broadcast on Kan 11, Israel’s public television channel, which interviewed representatives of the different Christian denominations in the Old City of Jerusalem. The article explored the dilemmas which Christians in Israel face as a minority in the Jewish state – a markedly different situation from much of the rest of the world, where Jews are a minority and Christians the majority.

The sensitive, well-researched piece incorporated perspectives from numerous Christian communities, including Catholics, Armenians, Ethiopians and Arab Evangelicals. Each interviewee shared their personal stiories in order to showcase the human dimension of their lived experiences to the Israeli public – so as not to be portrayed as the extension of a large, threatening body known as ‘the Church’.

Naively, I had assumed that this article might interest members of the aforementioned Facebook group for Russian speakers in Israel. First of all, I’m a member of the group, half-Jewish and half-Christian, and the article interested me. Secondly, I reasoned that the identity struggles faced by Christians in Israel might resonate with the Russian-speaking community, many of whose members come from mixed families with at least one non-Jewish relative. Even those whose lineage is fully Jewish, generation after generation, are often treated as a minority in Israel and so might well identify with a parallel minority group. Finally, since the article featured a member of Jerusalem’s Armenian community, as a proud Armenian I thought that the item might interest fellow Russian speakers of Armenian origin.

I asked the moderator whether I could share the article, and encountered a particularly critical response. She accused me of claiming that immigrants from countries of the Former Soviet Union aren’t Jewish (I never said that), and later added that publishing my post in the group would ‘shoot the community in the foot’ amidst its ongoing battle to legitimize its Jewishness in the Israeli public sphere.

Finally, she informed me that in fact there are only a negligible amount of non-Jews among former Soviet immigrants, and so the article wouldn’t be of any interest to most of the group. Having learned the lessons of my year of online-only interaction, I thought it best to duck out of the argument and forget about my post. A few moments later, I was redirected back to the group’s homepage, where the latest, fully-endorsed post was an advertisement for (non-kosher) sausages from a delicatessen in central Israel. Shooting the community in the foot, indeed.

I’m not trying to be bitter about the reaction I induced from the moderator, who is undoubtedly subject to pressure on multiple fronts when managing the often endless stream of debates and discussions on the group she operates. But her reaction, for me, epitomized a wider debate in Israeli society: nobody should be able to take away from an individual citizen’s right to have her identity respected in the public sphere, regardless of her religious affiliation.

I should be allowed to discuss, and even embrace, my Christian identity without that being perceived to diminish my Jewish identity or undermine my affinity with the State of Israel. Anybody should be allowed to live and thrive in Israel whether you’re Christian, secular, Muslim, or completely irreligious – so long as people fulfill their rights and obligations as citizens.

In recent days, the issue of Reform and Conservative conversions has occupied plenty of column inches in Israel, following the decision of the High Court of Justice to permit individuals who have converted to Judaism in Israel under the auspices of non-Orthodox denominations to be eligible for Israeli citizenship under the Law of Return (in addition to an earlier ruling permitting expedited conversions through designated courses in Israel, alongside formal conversion abroad). The court ruling has sparked an impassioned debate in Israel, with reactionary forces – with all their desire to thwart progress – attempting to sideline certain populations from the decision-making process and delegitimize lifestyle choices different from their own.

I felt that the complete negation of my identity that I experienced through this interaction with the Facebook moderator was a microcosm of the broad-based public debate surrounding religious identity in Israel, which again burst into the open following the court’s decision. The core question is the following: who has the right to determine individuals’ religious or personal identity: the individuals concerned, or the state? In Israel, which lacks formal separation of religion and state, the answer is the latter.

Yet alongside that, Israel enjoys rule of law, backed up by institutions such as the State Comptroller’s office, creating a mechanism to supervise these processes and prevent social disintegration. This sort of ruling sums up precisely why there are is a legal process.

Amidst the backdrop of a year spent online, I’m comfortable comparing the backlash to the court decision to social media: does a moderator of an identity-based group have the right to police that identity? If so, then they themselves need to be moderated by a relevant body in a clear and consistent manner, to integrate the checks and balances so crucial to a democratic society. Today, a Facebook group with thousands of members is a platform equivalent to Speakers’ Corner at Hyde Park, and online debate and discussion has to conform to certain norms and rules, such as respect for diversity and freedom of expression, just as would be the case in-person. Otherwise, we risk delegitimizing countless Israelis’ ability to articulate their identity on an everyday basis – just as Reform and Conservative converts have been prevented from doing for so long.

About the Author
Sivan Gaides was born in Armenia to a Jewish father and an Armenian mother, and made aliyah with her family in 1990. She has been involved in Jewish education for two decades, including working as a Jewish Agency shlicha (emissary) in Germany and India. She lives in Tel Aviv.
Related Topics
Related Posts
Comments