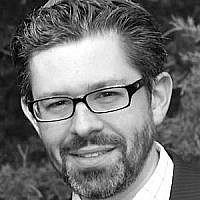 The Blogs
Aaron Brusso
Apply for a Blog
Please note that the posts on The Blogs are contributed by third parties. The opinions, facts and any media content in them are presented solely by the authors, and neither The Times of Israel nor its partners assume any responsibility for them. Please contact us in case of abuse. In case of abuse,
Report this post.

My professional organization, the Rabbinical Assembly, organized a conference call recently on the topic of what rabbis can and cannot say from the pulpit these coming high holidays about the November elections. Synagogues are non-profit organizations and therefore cannot be seen as advocating for certain political candidates or parties in official ways from the pulpit or in bulletins.

I have always felt this velvet rope appropriate in keeping out pedestrian discourse. This year, I actually think it’s dangerous.

In all other years I have believed the election season line appropriate as it reminds us all of our roles. Religion should be elevating conversations, speaking to the moral dimensions of issues and calling us to serve purposes and not just interests.

I believe no party or candidate should be afforded sacred approval.

There are two major parties in our country and both of them have governing philosophies that represent broadly discernible, legitimate, and principled disagreements.

Similarly, it is sometimes true that the US plays an important role in the world and must to ensure that our values are represented. It is also true that sometimes, we over-involve ourselves in a paternalistic way when we should be allowing others to assume responsibility.

We need political parties championing these different domestic and foreign policy approaches in order to have a robust debate about what is best at any given moment. I actually think that viewed this way, neither political party represents an eternally correct approach to an infinitely complex world. Rather each represents the other side of the case that needs to be argued for us to be responsible. In that sense, one party’s approach might be necessary at one moment and the other at another moment.

So while religion can and should speak to issues, I don’t think candidates and parties should be officially supported by clergy. We need the other candidates and the other party to be rounding out the conversation. If pressed, I can find texts in rabbinic tradition that support the philosophical approaches of both parties. The laws of tzedakah, charity, for example, counsel us both to be materially supportive of others and encouraging of personal responsibility. The Talmud is simultaneously supportive of a free market and worker protections.

When clergy support parties or candidates we run the risk of supporting a certain philosophical approach in all cases, which is tantamount to idolatry. Idolatry is a rigid and blind belief that one thing is true no matter how the facts on the ground change. And the facts change all the time. In advocating instead for discrete issues, we as clergy are supporting a particular philosophical approach to a certain problem at a specified moment. This is much safer ground for those of us who try to only worship that which is eternal.

I am not naive. I realize that political parties and politicians will sometimes take positions not out of a philosophical motivation but due to self-interest, money and winning re-election. But I think our job as clergy is to always give people the benefit of the doubt and represent a vision of conviction rather than corruption.

So for philosophical reasons, I support the idea that clergy should not be supporting or speaking against parties or candidates from the pulpit.

But what if the issue is not philosophy but character? Is it not the job of clergy to identify behavior that is a violation of our tradition’s teachings on personal ethics and call it out? This seems to me to be much safer ground. Indeed, my colleagues and I have spoken in the past about politicians’ choice of language, personal conduct and hateful rhetoric.

However, during election seasons we are counseled by the IRS not to speak or publish through congregational channels in ways that would seem to encourage voting for or against a particular candidate. This includes evaluations of a candidate’s behavior. Even if that behavior has nothing to do with their policy positions. We still must scrub from articles and pulpits even an appearance of favoritism or denunciation.

In every other election year I have felt that this deference makes sense even if it collapses the ethical into the philosophical. And anyway it’s nice to go to synagogue and get a break from the incessant radio, TV and online chatter.

But what if there came a candidate that represented a gross violation of countless Jewish teachings on personal behavior? How we treat people with disabilities. How we manage our egos. How we speak about women. How we treat the stranger in our midst. How we choose our words lest they lead to hatred and violence. How we speak about our own accomplishments. How we manage our hungers for attention, approval and recognition.

Would it not be the height of irony that a person who could wreak such moral havoc would find sanctuary from moral opprobrium by being a candidate? Something that could usher them into the most powerful office in the world?

I don’t think clergy should publicly advocate for one party or candidate because we should not be choosing one philosophy of governing over another. We need them both.

But this is not an issue of philosophy and it is not a typical issue of character.

Nothing should protect a person from being publicly held to the most basic standards of human decency. And certainly not a process that magnifies the consequences of such behavior, like running for the presidency of the United States.

So while I won’t make others pay for my beliefs by speaking in places that might implicate them, I will speak nonetheless here for myself as a Jew, as a rabbi and as a human being:

Donald Trump is a moral danger to the soul and character of the United States and he should come no nearer than he already has to its most powerful office.

There is no doubt that other candidates are deserving of moral critique. Trump, however, is not a difference in degree but in kind. So different, in fact, that our typical rules of disengagement in houses of worship seem written for another reality altogether.