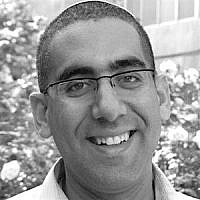 The Blogs
Roi Abecassis
Apply for a Blog
Please note that the posts on The Blogs are contributed by third parties. The opinions, facts and any media content in them are presented solely by the authors, and neither The Times of Israel nor its partners assume any responsibility for them. Please contact us in case of abuse. In case of abuse,
Report this post.

Last week, a seminar for 130 madrichim from across Europe took place in Vienna, led by the World Bnei Akiva ‘Dream Team’, a group of expert educators who provide leadership training to our young leaders in Jewish communities around the globe.

Taking centre stage at the seminar was a discussion on the future role of Bnei Akiva as a movement in Europe. Many Jewish communities across the continent are in decline, and many of the bogrim (graduates) who grew up on the values of Bnei Akiva have made Aliyah. The key question emerging from the debates was what our message for bogrim should be. Do we unashamedly promote the movement’s central ideal of Aliyah, knowing that ‘losing’ the best and brightest to Israel will gradually weaken the local community further? Or perhaps now, at a time when many small communities are dealing with the challenges of antisemitism, we are obligated to support those communities, who act as a lifeline for disconnected Jews.

This dilemma became a reality for Daniel, who finished school at the age of 17 and spent a year in Israel on a World Bnei Akiva program. A year full of exciting experiences, in-depth learning, learning to grasp Ivrit, getting to know Israeli society and making many friends from Israel and around the world. He comes from a small community in Europe, numbering a few hundred Jews. At the end of the program he was forced to confront the big question: Would he stay in Israel and continue his education here or would he return to be a leader in a declining Jewish community in an environment of antisemitism and anti-Israel sentiments.

This is the ‘movement schizophrenia’ that we live each and every day.

World Bnei Akiva, founded over 60 years ago, is directly active in over 100 Diaspora communities through the work of its close to 150 Shlichim (emissaries) from Israel dispatched across the globe. These Shlichim educate young people, deepen their Jewish identity, develop their leadership potential, strengthen their connection with the State of Israel and encourage them to make Aliyah.

How do we on one hand express our responsibility that all Jewish youth should receive a Jewish and Zionist education, whilst we on the other hand encourage our bogrim to make Aliyah and take up leadership roles in Israel, far away from what would have awaited them in their home communities? Sometimes it seems as if our bogrim that make Aliyah are abandoning their post, causing our activities in the Diaspora to decline. Where is our obligation to helping those communities grow and bring in more Jews?

It is clear that no magic formula exists in working out who should make Aliyah and who should stay. We believe that every Jew must make his home in Eretz Yisrael, because it is only here it is possible to live a full Jewish existence as a nation in control of its own destiny. At the same time our mission is to spread our ideology to those who have not yet merited to receive a Jewish and Zionist education.

One memory that will stay with me forever occurred at a Friday night tefilla in the Bnei Akiva Snif (branch) in Rio De Janeiro. Tens of madrichim were dancing with joy at the end of tefilla with kippot on their heads. At the end of the service, one by one, the kippot came off. I approached the Shaliach and asked him how he gets so many young people to Snif whilst so many bogrim from Rio make Aliyah each year. The secret is the understanding that our goal is multi-dimensional. Aside from Aliyah we are also responsible for bringing more young people to our movement.

About the Author
Roi Abecassis is Chief Executive Officer (mazkal) of World Bnei Akiva and also serves as CEO of WZO 's Hagshama Department. A graduate of Yeshivat Har Etzion, he is a qualified lawyer with a master's degree in Political Science from the Bar Ilan University. Roi lives in Modiin with his wife and four children.
Related Topics
Related Posts
Comments