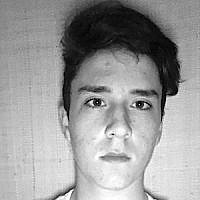 The Blogs
Morris Kryss
Apply for a Blog
Please note that the posts on The Blogs are contributed by third parties. The opinions, facts and any media content in them are presented solely by the authors, and neither The Times of Israel nor its partners assume any responsibility for them. Please contact us in case of abuse. In case of abuse,
Report this post.

When the UN gave only apiece of the land to the Jews, the Arabs got furious and they wanted all the land or nothing. The Jews accepted half of the land because they knew that they would get it all eventually. The Arabs got mad at this deal and threatened to got to war with the Jews if they did not get all of the land. The Arabs went to war with the Jews and they lost, the Jewish State was able to defend their land. For the next 19 years the Gaza strip and Judea and Samaria on the Jordan River’s West Bank weren’t an independent Arab state, but rather occupied by Egypt and Jordan respectfully. In 1967 the Arab armies once again tried to conquer all the land of Israel and failed. The Israelis were able to conquer the Sinai Desert, Golan Heights, Gaza Strip, and Judea and Samaria and the Jordan River’s West Bank. Israel would give those land backs if peace was established, according to international laws, but the Arabs did not want to make peace and let the keep the land. They turned down the request for peace with their infamous three “no’s” – no negotiations with Israel, no peace with Israel, and no recognition of Israel. Now Israel does not know what to do with the land that Arabs lived on, the land that they got from the war.

Some people believe that Israel should not build anything to the land because first of all the land is not theirs; they took them from the Arabs. The UN gave those lands to the Arabs and by building on it Israel would steal and illegally occupying land that isn’t theirs. Also the more homes Israel builds in the West Bank/Judea and Samaria the less likely it is that Israel will move out of the West Bank in any peace deal, because now there are Israelis living there the government can’t just ask them to leave their homes.

Other people believe that Israel should build in those lands because God gave us Judea and Samaria, the land is historically ours. Just because the UN says it’s not, doesn’t mean it isn’t. Also when Israel tried to give the land back for peace the Arabs were the ones that refused it, so if they don’t want the land we should not just leave it the we should build on it and expend the Israeli territory.

About the Author
Morris Krysswas born in Brazil but has been living and studying in Miami for about five years.
Comments
Advertisement