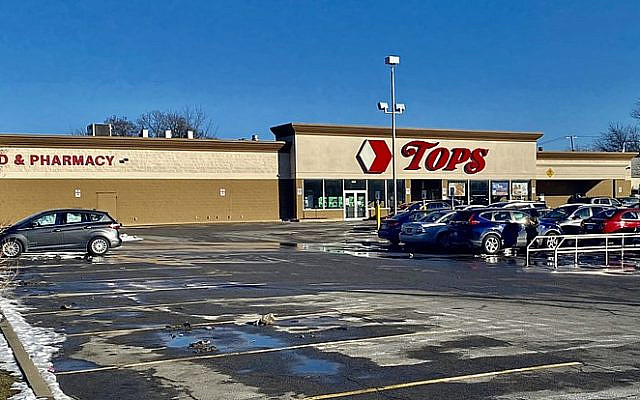 The Tops supermarket on Jefferson Avenue in the Cold Spring section of Buffalo, New York, as seen on a February 2022 afternoon. (CC BY 4.0 Wikipedia)

In The Great Replacement, story of a deadly idea, historian Nicolas Lebourg and journalists at Radio Nova, Caroline de Saint and Thomas Zribi reveal how the translation of a tweet from the mayor of Béziers, France, by the television channel Russia Today, spread the concept of “Great Replacement”, in the English-speaking world. Mathilde Tastavy (LREM), opponent against Robert Ménard in Béziers and spokesperson for Emmanuel Macron’s local support committee, analyses the situation.

Who is Renaud Camus, philosopher and creator of the Great Replacement concept?

Caroline de Saint: Renaud Camus is a French writer. Former left-wing activist and rather unknown author, he is recognized in particular for having invented the concept of the “Great replacement” in 2010. He lives today in his castle of Plieux, where we went to interview him.

Nicolas Lebourg: His “great replacement” idea does not cover any theory in the sense of a system of thought built on data. It is the assertion that the white Christian French people are being replaced by an African Muslim population and that this process will be completed within a generation.

Who is Jean Raspail, self-proclaimed vice-consul of the fictional Mapuche kingdom of Araucania and Patagonia, to whom Renaud Camus dedicates his book, and qualified by Steve Bannon, as a prophet?

Caroline de Saint: Jean Raspail is a writer, who became known in particular for his book, Le Camp des Saints in 1973. He describes the invasion of France by millions of migrants from India. In 1985, he published an article for the Figaro Magazine, with a veiled Marianne on the front page, indicating that France would be replaced from 2015 by immigrant populations, Islam then becoming the first religion in the country. His predictions did not come true, but Jean Raspail remains a reference for the far right, which explains why Renaud Camus dedicates his book to him.

Thomas Zribi: Jean Raspail died in 2020. The novel Caroline is talking about says that migrants would sow chaos in their path and the piece explained that North Africans and Africans in general, having a higher fertility rate than French women, would overpopulate France. His figures turned out to be completely false, which does not prevent Renaud Camus or the magazine Valeurs Actuelles from considering him a “prophet”.

Nicolas Lebourg: Raspail prophesied the destruction of Europe to demonstrate that France would be demographically Muslim in 2015. The other person to whom Renaud Camus’ book was dedicated was Enoch Powell, a British politician famous for his “speech of the rivers of blood” in 1968 where he prophesied the tipping of Great Britain in the racial civil war due to Pakistani immigration.

Did Robert Ménard knowingly import the concept of great replacement into the USA?

Caroline de Saint: Concerning Robert Ménard, he does not play a direct role in the diffusion of the term in the USA. We describe a significant event, in which he plays a secondary role. On October 3, 2016, appeared for the first time on Twitter the term “Great replacement”, the english version of “Le Grand Remplacement”, during the translation of one of his tweets (where he commented on a class photo) by the site of Russia Today. This is how the idea has, among other places, won over America.

Thomas Zribi: What is interesting I think, and what we show in the doc, is how an expression can travel very quickly via social networks and by some far-right influencers.

Nicolas Lebourg: At the same time, he now says that we should have welcomed the Syrians, the guy’s case is complicated. It’s hard to place someone who is moving so much at the moment; however, he is published by the Nouvelle Librairie, which also publishes Renaud Camus.

What does this documentary tell us about Emmanuelle and Robert Ménard ?

Mathilde Tastavy: What this documentary teaches us is that it is now established from a journalistic and historical point of view that Robert Ménard is at the origin of the internationalization of the expression of great Replacement. This concept, during the demonstrations in Charlottesville, brought together for the first time in the United States, all the components of the far right: neo-Nazis, white supremacists and identitarians.

Despite his recent dilatory tactic, Robert Ménard, like his deputy wife, Emmanuelle Ménard, are responsible for the dissemination and banalization of this concept. This concept they have used and abused. In 2016, for example, he did not hesitate to call the new Muslim mayor of London, Sadiq Khan, “a symbol of the great change in progress.”

They have been the spokespeople for the worst of the far right and are responsible for the rise of hatred, racism and antisemitism in our country. Using freedom of expression as a shield, they have continued to disseminate the most abject ideas by offering forums to Alain Soral, Renaud Camus or Dieudonné.

They have constantly criticized the Gayssot Law, which is a non-censorship law, thus promoting Holocaust denial. Behind the politically incorrect is the politically abject. If today, Robert Ménard tries to make amends just as he is at the origin of the normalization of Marine Le Pen, make no mistake about it, it is only a strategy so that the far right and his ideas come to power in France.

This weekend’s shootings in Buffalo offer a tragic reminder of the price we pay for refusing to curb the easy access to guns. It should also serve as a wakeup call for all Americans of goodwill, regardless of party.

Jill and I will travel to Buffalo on Tuesday to grieve with the community that lost ten lives in a senseless and horrific mass shooting.

It should not be hard for elected officials and candidates to disavow paranoid white supremacist fantasy like "great replacement" theory. It should be a bare-minimum requirement for engagement in politics.