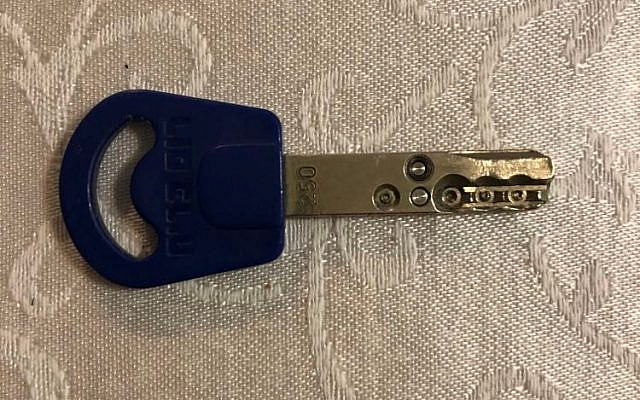 You may have heard of a relatively new trend of baking Shlissel Challah which has taken off with the popularity of social media.

Why would anyone want to bake a key challah?

The idea of baking a key challah is that it is thought to be a segulah (good omen) for parnassah (to earn a good living). The thought behind it is if I bake a key challah, I will get a better job, a raise, win the lottery etc.

Where does this come from?

The Talmud, Rosh HaShana 16a connects Pesach with parnassah:

At four junctures during the year the world is judged: on Pesach for the grain…

The verse that is used to connect Pesach and the key is from Shir HaShirim 5:2 (which is read on Pesach):

I sleep, but my heart wakes: Hark, my beloved is knocking, saying, Open for me, my sister, my love, my dove…

“Open for me” – Rabbi Yasa said: The Holy One blessed be He said to Israel: My children, open for Me one opening of repentance like the eye of the needle, and I will open for you openings that wagons and carriages enter through it.

Why do we specifically need parnassah right after Pesach?

In the book of Yehoshua 5:10-12 we see that after B’nai Yisrael entered Israel and celebrated Pesach they ate the food of the land and the manna no longer fell:

Just as B’nai Yisrael had parnassah right after Pesach, so too do we want to have parnassah at this time of year.

Can’t we just pray for parnassah? Is using a key even a Jewish concept?

In Parshat Kedoshim we are taught to be holy and follow God’s mitzvot, not the ways of idolatry.

Since the practice of the key is not from Jewish origins, it can be considered Darkei HaEmori (the ways of the Emorites) and should therefore be forbidden.

There is a Christian practice going back to the 14th century (which originated from the pagan Saxons who would bake crossed bread in the beginning of spring to show the four quarters of the moon in honor of the goddess Eostre) to bake Easter bread a few days before Easter with a cross baked into the top to symbolize the crucifixion. Hot crossed buns would be an example of this type of bread. Considering that a key looks a lot like a cross and when the minhag of Shlissel Challah originated the key was pressed on top of the challah (not baked inside) we have reason to believe that this “minhag” was adapted from a non-Jewish custom.

If we reject baking Shlissel Challah, how do we ensure that we have parnassah?

There is a mitzvah to do Hafrashat Challah every time that we bake bread which entails separating the dough that would have gone to the Kohein, burning it and saying a blessing. Hafrashat Challah is a special time to add our own prayers and blessings and would be the perfect time to pray for parnassah especially this year since a lot of Israel’s grain is usually imported from Poland and the Ukraine and due to the war we will need to import the wheat from other countries. There is no need for us to add in foreign symbols and objects and we don’t need intermediaries, we can direct our prayers straight to God.

May we be blessed with a Shabbat Shalom, delicious challahs and lots of parnassah.