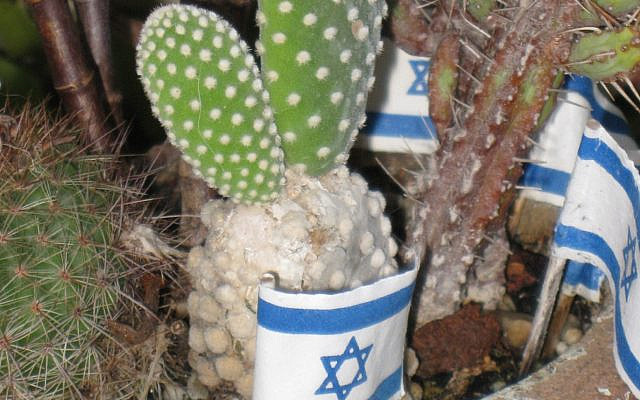 Israeli flag next to a cactus (credit: Chenspec / Wikimedia Commons).

The direction that the expected new Israeli government promised to take sounds pretty awful: Lifting a ban on racist MKs, political interference in the judiciary, more settlements and possibly annexation, anti-LGBT legislations, gender-segregated public events, and so on.

One might think that we’re reading the program of the Iranian regime, but no, this is Israel, the liberal democracy that we have been defending for decades. Will it still be a liberal democracy in a year or two?

Considering this, it is fair to ask whether supporting Israel still makes sense.

If we stopped supporting a cause the moment that its main proponents started acting in ways we do not agree with, we would never have supported the Palestinian right to self-determination. But both rights deserve to be supported on their own merits, not based on how some individuals act on them.

The Palestinians’ inability to act ethically has hurt their own cause more than it has hurt Israel, and the new Israeli direction is likely to hurt Israel more than it will hurt the Palestinians. The Palestinians have long needed to be told this, but any warnings to this effect have fallen on deaf ears. Now the upcoming Israeli government is equally ignoring warnings, even when the warnings come from Israelis themselves.

I have long advocated that Arabs need to learn from Israel and behave more like Israelis. Now I am disappointed to see that the reverse is happening. It is Israel that is learning to behave more like Arab states. While Israel has succeeded so far and has prospered thanks to pragmatic policies, it is now adopting dogmatism and tribalism as its guides, just as Arab states have done for a long time.

But despite this, when Israel is attacked, it has the right to defend itself, regardless of whether the prime minister is Naftali Bennett, Yair Lapid, Benjamin Netanyahu, or even, God forbid, Itamar Ben-Gvir or Bezalel Smotrich.

After all, the Palestinians have not lost their rights based on who leads them.

But while Israel loses no fundamental rights, by adopting far-right policies, support for Israel is likely to weaken, and more importantly, the far-right policies contemplated for the West Bank are likely to lead to Israel’s self-destruction by turning it into a de-facto binational state.

So, one could argue that whether we continue to support Israel or not may not matter in the end. As we’ve learned with the Palestinians, you cannot force people to act in their own best interests.

But I believe that it matters. The type of support that Israel receives is particularly important. Too much of Israel’s support now comes from the American Christian right, and not enough comes from the left, yet the left has not abandoned the Palestinians despite decades of Palestinian terrorism. Is it a surprise then that Israelis have felt let down by the left and have turned increasingly to right-wing parties?

We can choose a more ethical and proportional approach.

About the Author
Fred Maroun is a Canadian of Arab origin who lived in Lebanon until 1984, including during 10 years of civil war. Fred supports Israel's right to exist as a Jewish state, and he supports the Palestinians' right to self-determination in their own state. Fred supports a liberal and democratic Middle East where all religions and nationalities, including Palestinians, can co-exist in peace with each other and with Israel, and where human rights are respected. Fred is an atheist, a social liberal, and an advocate of equal rights for LGBT people everywhere.
Related Topics
Related Posts
Fred Maroun