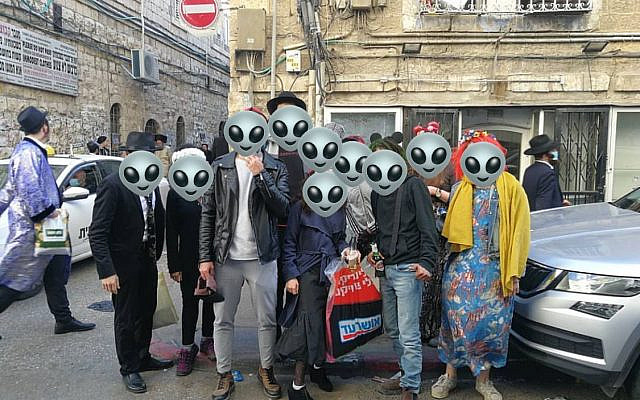 Some aliens in Meah Shearim on Shushan Purim 2021 (courtesy)

Praised be the social media memories feature for bringing up moments that turned into milestones! And not just any memories, but the most extraordinary ones, those from a holiday such as Purim, which we could even forget when occasionally pushing the mitzvah of drinking to its limit!

Last year, when the full lockdown didn’t take place, we, the local Jewish Jerusalemites took our Palestinian friends to visit one of the most exciting areas in town on this day – Meah Shearim. In my opinion it is THE place to be on Purim on a late afternoon, just when drunk Hassids come back from long festive meals, staggering from being nicely treated and devotedly fulfilling the mitzva of drinking as much as not to differentiate between good and evil, black and white, male or female. It’s the only day of the year without men in fur hats averting their eyes from me in a glaring manner.

We are all dressed up, trying to blend in with the celebrating crowd. Mohamed and Mahmoud are even wearing black hats borrowed from their Jewish friends. Here is our first blunder though. A local passerby yells at us: “Respect the neighbourhood. Take off your face masks!” The ultra-orthodox man is laughing and he even comes to explain to us his joke: “See, in our neighbourhood we don’t believe so much in Covid and we don’t wear those white and blue masks. White and blue are colours we don’t like in general…” the guy called Yoysele continues. He even looks at the girls when he talks and I get it as a sign of open-mindness so I introduce him to our guests from the other side. He is indeed positively surprised and points to a small graffiti sign on the wall saying “Free Palestine.”

At the same time, three local Hasidic teenagers are staring at us, and quite obviously even talking about us. They inch closer to Yoysele and ask him in Yiddish: “Why do you talk to these Tziyoynim (Zionists)?” Yoysele translates the question to us and we all burst into laughter, thus fulfilling two Purim commandments simultaneously, the one to rejoice and the second of not being able to tell the difference between anything and anyone anymore.

We took our friends to a Purim party in the Jerusalem forest, near HarNof, where the most original costumes back then were crowns, aka Coronas, just before all the massive lockdowns. I remember well how naïve we were predicting the Covid future. Purim has some mysterious power to bring up turning moments in human history. Take the Purim of 1953, for example, when Stalin had a stoke, or the so-called Bulgarian Purim in 1943 when the Bulgarian Jews were saved from the Nazis, or perhaps, with God’s help, the Purim of 2022 when another Russian dictator might meet his end.

How carefree our Purim of 2019 was back then when we introduced our favorite holiday to our Palestinian friends for the first time. And that Purim also became a milestone but this time for our friend from Jericho, Ahmed. After partying for two nights and days in a row, drinking many arak shots, dancing with girls, we were all shocked to see his Instagram stories from the week after, circling Kaaba in Mecca and repenting for his sins. Ever since that fateful night, our friend doesn’t drink with us anymore and prays five times a day. With the help of Purim, as he put it, he “finally” found God.

It was also that same Purim of 2019 that, nine months later, inspired the name of our initiative, Holy Local Aliens, our community of Israelis, Palestinians and internationals.

Everyone always asks us, the core group members, why we called ourselves aliens– we always have at least twenty different interpretations (each) and all of them are legit and cool, although, thanks to Facebook memories, I finally remembered how it all really started…

This year for Purim we wanted to invite some of our West Bank friends. We had the idea of us all dressing up like aliens because that’s exactly how we felt, like aliens in the Holy Land, where your friendship relations are often determined by tragic events in your news feed. The Museum of Science was hosting a space party, the perfect theme for our aliens’ outfits.

I would add though to the list of “indeed” and “no wonder” arguments that, indeed, when your chances for sharing positive experiences together are so limited that you need to wait for permits for your friends to come (which stops most of them) and you are officially banned from visiting them (which stops most of us), then no wonder that the series of tragic events in our news feeds will have also no chance to come to an end.

It is that cliché-d “closed cycle” of fear and security measures, bans and blockades, which disable turning enemies into friends. Here I could use some product placement for our already five years old project with Rami Aman called “Skype with your Enemy” since Gazans almost never ever get permits. (By the way, he is back home and safe after being held in jail for a peace initiative in Gaza.)

This post is really not about politics, it’s about friendship and as one of my “enemy–friends” wrote in our friends’ group on  Purim Eve, “I only wanted to wish you guys “Burim Sameah” and wear my alien mask…”

But don’t worry, as you already know, we still managed to somehow bring a few of our friends to Jerusalem…

Purim in Jerusalem is my favourite day of the year and I haven’t missed one since I made aliyah. Eight Shushan Purims in a row, three of them shared with Palestinian friends.

This year though I didn’t stay in Jerusalem but went to Sinai to see my dear friend and the first alien I ever met in the Holy Land – Rami from Gaza. It was eight years ago, just before my first Shushan Purim when Rami flipped many of my preconceived notions about Palestinians, Gazans, friendship beyond walls, genders, nationalities, religions and all other kinds of concepts I had in my head.

Reflecting on all those memories, I know why celebrating Purim with Rami makes so much sense to me. It is the holiday of turning things upside down, but most importantly prejudices, assumptions, convictions, attitudes and ways of thinking! Shouldn’t we all do it at least once a year?

P.S. Cross fingers for me and Rami to find some Purim party tomorrow on the shanti shores of Sinai. 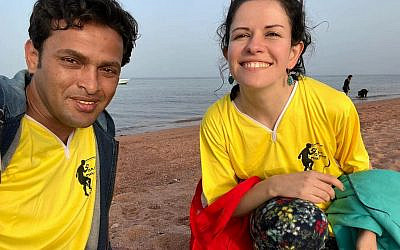 Courtesy
About the Author
Ruth is a co-founder of the organization "Holy Local Aliens." HLA brings together alienated communities in Israel and Palestine through unique and creative experiences. Its aim is advancing cultural awareness, tolerance and shared society. Ruth was born and raised in Bulgaria, lived in Germany, and made aliyah nine years ago.
Related Topics
Related Posts
Comments