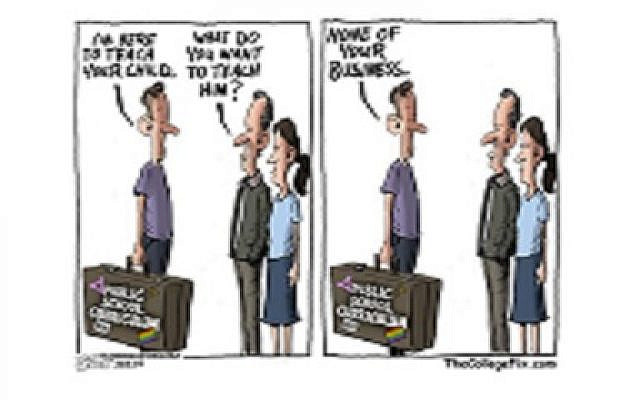 After my previous posts, “Desperate Times Call for Transcendent Measures,” and “Signs of the Coming Redemption,” I had hoped to return to writing about Torah-related matters, especially the conflict between science and religion. Sadly, events are moving so rapidly, and the stakes are so high, that I feel compelled to comment once more on our current plight.

In 2013 an MSNBC host was discharged for saying on the air [prematurely] that children belong to the whole community, not their parents, which aroused a furor at that time. Since then, the “woke” takeover of education has reached the point where the “progressives” are indoctrinating rather than educating, with the full support of the teachers’ unions. When schools were closed because of COVID-19 and instruction shifted to online, parents were shocked to find that their children were being taught critical race theory (disguised under other names), LGBTQ issues, explicit descriptions of sex acts (including pedophilia) and the 1619 project, a dishonest rewriting of American history claiming that America sought independence from Britain to preserve slavery. When parents started attending school board meetings to protest, the Justice Department commissioned the National Association of School Boards to write a letter alleging parental misconduct, whereupon Attorney General Merrick Garland pronounced the parents to be “domestic terrorists” and called for the FBI to investigate them.  We may add that the Justice Department is sending letters to all fifty state attorneys general warning them not to take any measures to restrict transgendered males from competing in women’s sports, and the President is reportedly preparing to issue a reinterpretation of Title IX of the Civil Rights Act to block parents from intervening when a child seeks to transgender.

Setting aside the political issues for the moment, we observe that the progressives have been pursuing a policy of premature sexualization of children.  Why so young? As the song from South Pacific goes, “you’ve got to be carefully taught” from an early age.  Thus, for example, the Evanston-Skokie School District has adopted an LGBTQ+ curriculum that starts with pre-K introducing the rainbow flag and gender identity, moving on to kindergarten more about gender identity and transgendering, then in first grade introducing gender pronouns and non-binary identities, followed in third grade with the assertion that white European colonizers imposed their Western/Christian ideology on “spirit people,” and that in fact the gender assigned to them at birth isn’t necessarily what’s in their heart; in fact, they are urged to “break the binary” and reject “whiteness.” (They had to work in their obsession with race.) The goal is to cause confusion in children’s minds that works to the advantage of one of the Left’s constituencies.  Specifically, since gender reassignment surgery results in lifetime sterility, the transgender movement obviously needs new recruits to keep going, much as the Shakers did in an earlier era. Consequently, transgendering is being facilitated to the extent of giving puberty blockers to pre-teens and having gender reassignment surgery in the early teens. For example, The Federalist has reported that a Wisconsin school district (and many others) instructs teachers not to tell parents if their children are targeted for transgendering. A school nurse in Connecticut was recently suspended for disclosing that the school was administering puberty blockers to an 11-year-old boy. “Don’t tell parents” is a basic principle for child abusers.

Still more shameful is the capitulation of the Disney Company to the woke agenda, to the point of no longer using the terms “ladies, gentlemen, boys, and girls” at their theme parks because they convey gender, and of opposing the recently enacted Florida law forbidding sex education in grades K-3 by falsely characterizing it as “Don’t Say Gay,” when the word “gay” appears nowhere in the law. Personally, I believe a nationwide boycott of everything Disney – movies, theme parks, etc. – is called for; if not for the questionable legality of secondary boycotts, I would include every corporation owned by Disney: ESPN, ABC, Lifetime, History, A&E, FX, Marvel Studios, and Lucasfilm, among others.

Moreover, the teachers’ unions have joined with leftist civil rights organizations to try to block increased transparency in public education. As commentator Dennis Prager mentioned on his talk show the other day, it is deplorable that elementary school teachers, the great majority of whom are women, aren’t doing more to protect their charges.

Moving up to a higher age bracket, allowing transgendered males to compete in sports as females is a travesty. Lowering one’s testosterone level does nothing to reduce advantages in muscle development, lung capacity, and so on. In addition, having biological males who still have male genitalia parading around in women’s locker rooms is shameful.

Another more direct threat to Jewish students that I have described in previous posts is that our children in the public schools, and possibly even in the private schools, are also threatened by the adoption of mandatory anti-Semitic “ethnic studies” courses. And if we go to the college level, the situation is even worse. For example, the University of California is adopting a requirement that any student who wants to enroll must have completed such a course, with a curriculum similar to the extremely anti-Semitic first California version that Governor Newsom vetoed. Oklahoma Wesleyan University President Everett Piper goes as far as to be worried that violence is coming because our schools have taught so many students (23% in one survey) that it is legitimate to force others to agree with them.

It should be obvious that we need to remove our precious children from the sewer that public education is rapidly becoming. Granted, even removing children from the public schools doesn’t guarantee that they won’t be exposed to gross violations of Jewish values. For example, there has been a running battle for years between yeshivas and Ofsted, the UK education inspection agency, about attempts to introduce LGBTQ and other sex education for 4- to 11-year-olds.  Not surprisingly, an op-ed in the leftist Jewish weekly Forward supports the Ofsted position.

Nevertheless, more parents are coming to recognize the benefits of Jewish day schools. Enrollment is rising, but it would rise more rapidly if not for the high cost of tuition. It appears, however, that a solution may be at hand in the development of English-Hebrew charter schools, which receive public funding (though parents may be asked for supplemental contributions). If these schools become widespread, current day schools could be limited to religious studies, which would substantially reduce costs and thereby bring down tuition. Teachers of secular subjects from the current day schools hopefully could largely transfer to the new charter schools.

There are now at least two models for Hebrew-English charter schools. One is the Ben Gamla Charter School, which started in Broward County, Florida in 2007 as the first Hebrew charter school in America and now has six schools in south Florida.  While it appears that a majority of the staff are non-Jews, and students of all races are depicted on their website, naming the chain after a High Priest during the Second Temple Era who is credited with starting the first Jewish day school hints at its orientation. The other chain is Hebrew Public, which started in New York in 2009 and and has expanded since 2015, so that it now has branches in Brooklyn, Harlem, Staten Island and Philadelphia, along with affiliate schools in Los Angeles; San Diego; Washington, D.C.; East Brunswick, N.J.; and Edina, Minn., and is now enrolling Ukrainian refugee children. They publicly commit to racial diversity and integration, with a diverse staff, and number among their major contributors Catherine Zeta-Jones and Michael Douglas.

Both schools justify their daily Hebrew language instruction and Israel studies program as beneficial for students looking to enter the world of commerce. One may surmise that large numbers of non-Jewish parents will be interested, just as many non-Catholic Black parents send their children to parochial schools expecting them to receive a better education than in the public schools. They all may well be right.

About the Author
I'm a native New Yorker (Brooklyn, to be precise) transplanted to the desert as a teen-ager. I hold a Ph.D in Physics from Stanford and have taught mathematics and physics at the high school, community college, and university level. I'm an adult ba'al teshuvah and label myself as centrist Orthodox and a Religious Zionist along the lines of OU, Yeshiva University, and Mizrachi.
Related Topics
Related Posts
Comments