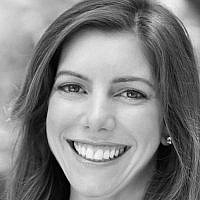 The Blogs
Rachel Berke
Apply for a Blog
Please note that the posts on The Blogs are contributed by third parties. The opinions, facts and any media content in them are presented solely by the authors, and neither The Times of Israel nor its partners assume any responsibility for them. Please contact us in case of abuse. In case of abuse,
Report this post.

Confession. I am a member of the silent majority. I vote, but I don’t post my politics publicly or bother discussing a political candidate’s qualifications with online trolls. Really, what’s the point? In today’s ever polarizing political landscape, such debates rarely change hearts and minds and they almost never end by agreeing that “reasonable minds can differ.” But as a Texas resident, and with the enactment of Senate Bill 8 (SB8), the notorious abortion ban, I no longer have the luxury of remaining silent.

But as a Texas resident, and with the enactment of Senate Bill 8 (SB8), the notorious abortion ban, I no longer have the luxury of remaining silent.

SB8 is the latest example of governance via political stunt. Many other states have tried passing anti-abortion legislation since Roe v. Wade, but Gov. Abbott has added some Texas-sized extras onto this latest bill. SB8 bars abortion once embryonic cardiac activity is detected, which is usually as early as six weeks. A woman’s reproductive rights cease to exist if the time for a legal abortion passes before she’s aware she is pregnant or has reliable medical information about the fetus.

The law goes a step further. It actually empowers private citizens to act as bounty hunters to sue abortion providers or anyone who helps facilitate the procedure after six weeks. Those who bring cases that are successful in court can be awarded at least $10,000 plus a reimbursement in legal fees.

As a Texan, a woman, and an Orthodox Jew, SB8 has effectively stolen my basic rights of autonomy, reproductive health and freedom of religion in one fell swoop.

SB8’s overreach and targeting of women has shocked me out of my silence. I can no longer indulge my jaded skepticism about politicians. As a Texan, a woman, and an Orthodox Jew, SB8 has effectively stolen my basic rights of autonomy, reproductive health and freedom of religion in one fell swoop. How did the pendulum of national discourse swing so suddenly from #metoo to #sueme?

How did the pendulum of national discourse swing so suddenly from #metoo to #sueme?

Here in Dallas, I haven’t found many constituents who are grateful for Abbott’s “heroics.”  Having lived in Dallas for almost 25 years, I have witnessed the deep red state of Texas morph to blue in local elections and purple culturally. Some of my best friends still support Donald Trump and yet, will never support a law like SB8. They see it for what it is; political drama that will wear itself out. The Department of Justice filed suit against the state of Texas over the new law to protect women seeking an abortion and Lyft and Uber drivers have been assured that the companies will cover any fines they incur by driving a passenger to a clinic. This law never should have come to pass and unfortunately, since the wheels of justice churn slowly, it may be years until it is tested in our judicial system and overturned by the Supreme Court. As an Orthodox Jew, I wonder, who will do the same for the Texan Jewish clergy should they advise a pregnant congregant to terminate her pregnancy in accordance with Jewish law?

Jewish law is neither “pro-choice” nor “pro-life” in the colloquial or political sense.

Many people make the false assumption that Orthodoxy forbids pregnancy termination. But among Orthodox Jews, when a woman shares that she is pregnant, the standard response is “B’sha’a Tova” (it should be at a good time),  because Jewish law doesn’t recognize the fetus’ personhood until it is actually born. Only upon the birth of a baby  do we wish the family a hearty mazel tov. Until then, the health and welfare of the mother takes precedence over the fetus. Jewish law is neither “pro-choice” nor “pro-life” in the colloquial or political sense. Jewish law, as it relates to abortion, is very much determined on a case by case basis, taking into account the condition of the fetus, and the physical and emotional health of the mother. Pregnancy termination is often deeply private and generally lacks communal awareness. That said Orthodox women do undergo abortions, and some women’s experiences have been chronicled.

As a member of the Dallas Jewish community, my religious beliefs have been attacked by the Pro-Life Christian religious agenda.

As a member of the Dallas Jewish community, my religious beliefs have been attacked by the Pro-Life Christian religious agenda. Texas’ SB8 is reminiscent of San Francisco’s attempt to ban circumcision and the European ban on shechita (kosher, ritual slaughter of animals). The motivation to ban these practices differ in that the anti-circumcision  movement and ritual slaughter opponents most often come from those holding secular and left leaning liberal values, while the pro-life movement comes from the deeply religious conservative right. Those proposing to uproot these practices may have deep sensitivities and, perhaps good intentions, however, these bans are simply inconsistent with Jewish law and our Constitutional right to practice our religion freely.

Because of identity politics, there is a concerning trend among right-wing Orthodox Jews to align themselves with the Republican Party.

Because of identity politics, there is a concerning trend among right-wing Orthodox Jews to align themselves with the Republican Party. This may be due to Trump’s support for the State of Israel and the perception that the Democratic party is anti-Israel, but it is a knee-jerk, monolithic response to a complex party platform. Our local Jewish community and those nationwide, would be better served if we, like our health care providers and our halachic advisers, made our important decisions on a case by case basis.

About the Author
Rachel Berke is a JOFA board member, past President of the Akiba Academy of Dallas Board of Trustees and was a Trustee of Yavneh Academy of Dallas. Previously, Rachel was an attorney at the New York and Dallas offices of Fulbright & Jaworski LLP (now Norton Rose Fulbright) and in-house counsel for both Blockbuster Inc. and TXU Energy. Rachel is a graduate of Yeshiva University’s Stern College for Women and Cardozo School of Law. She and her husband Matthew have three children and are active members of Congregation Shaare Tefilla.
Related Topics
Related Posts
Comments