This week marks the ten year anniversary since the first time I read Torah in public. Simchat Torah 2002, my family and I had just moved to Melbourne, Australia, for three years, and I quickly found a warm home with the Orthodox Women’s Network. Dr. Jordy Hyman, Naomi Dessauer and Janet Belleli ran the group with skill and aplomb, and generously asked me if I would like to read the third aliyah on the holiday. It was thrilling and enthralling. To this day, whenever I get stuck on a cantillation, I think back to the passage I read then – “U’l’Yosef amar” – knowing that it’s all ingrained in my consciousness and my spirit from that very first Simchat Torah.

That Simchat Torah was a watershed moment for me. Even if it took me three decades to go from passive listener to active leader, I love layning, and I always have. I can still recall sitting in the women’s section of The Young Israel of Flatbush when I was a teenager, listening to the Torah reading and trying to match the marks on the letters to the sounds I was hearing. (When I eventually learned to read Torah, I did it via tape recorder, and that’s why to this day, I have no idea what people mean when they refer to a “pashta” or “zakef katan,” but I can tell you how a little chupchik over the letter is meant to sound.)

The cantillations have always been a vital part of understanding the text. I have given numerous divrei torah over the years using textual insights based on cantillations. When, in Megillat Esther, for example, Esther is called to the king during the beauty pageant – “Ub’hagiya tor Esther bat Avihail dod Mordechai,” the music brilliant reflects her hesitation with a pausing, haunting, aching melody. I love that. I love reading the Torah with its transmitted music. It brings the whole heritage to life for me, and makes the narratives real. 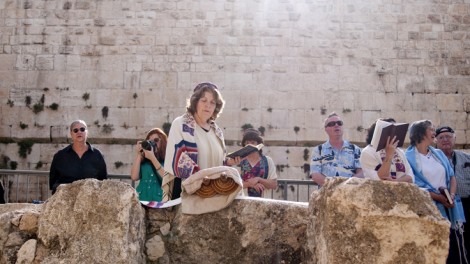 Anat Hoffman of the Women of the Wall reads from the Torah at Robinson’s Arch outside of the Western Wall (photo credit: Hadas Parush/Flash90)

Still, until I actually learned to layn myself, I didn’t fully own the text as my own. It created a whole new set of connections for me. It was a crucial step for me in feeling like I was truly part of the community. For this, I would always be eternally indebted to the women of OWN Australia. I wouldn’t be who I am without the opportunities they gave me. I have layned many times since then and listened proudly to my children – both genders – layn. The layning has inspired in me hope that there is an active place for women in Orthodox life. It has inspired me to keep fighting for a better Orthodoxy, for one that fully appreciates the value of the women in the community.

I think that Simchat Torah can be a great entry for Orthodox women into Jewish life. So often, I pass by synagogues on Simchat Torah and I see women sitting outside, bored or chatting. I think about all the ridiculous rules that still exist in so many synagogues that do not allow women to touch the Torah or dance with the Torah. This is an injustice not only to women but to the entire community. We all need women who are moving and animated and connecting to the heritage rather than sitting around twiddling their thumbs. Simchat Torah is a fantastic holiday for engaging all the senses – joy, dancing, movement, scholarship, text and community. That some synagogues are still excluding women from these experiences is nothing less than a shonda. Synagogues in Israel and around the world should look to Simchat Torah as a time of welcoming, inclusion, and celebration of every human being in our midst, each of us a Torah in an of ourselves. We are all God’s handiwork.

About the Author
Dr Elana Maryles Sztokman, two-time winner of the National Jewish Book Council Award and winner of the Gourmand Award, is a Jewish feminist author, activist, educator, researcher, indie-publisher, coach, consultant, and facilitator. She is the founder of the Jewish Feminist Academy (www.jewishfeminism.org) as well as Lioness Books and Media (www.lionessbooks.com) She writes and speaks widely about culture, society, gender, and equality. She has been involved in many causes, is one of the founders of Kol Hanashim, the new women's political party in Israel, and is Vice Chair for Media and Strategy for Democrats Abroad-Israel. Follow Elana's newsletter, The Roar, for news and updates, at https://elanasztokman.substack.com/ or contact her at elana@jewfem.com
Related Topics
Related Posts
Comments