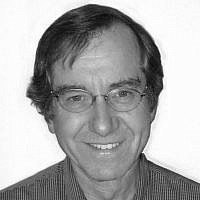 The Blogs
Allen Katzoff
Apply for a Blog
Please note that the posts on The Blogs are contributed by third parties. The opinions, facts and any media content in them are presented solely by the authors, and neither The Times of Israel nor its partners assume any responsibility for them. Please contact us in case of abuse. In case of abuse,
Report this post.

There we were, standing on the edge of the ledge, facing a line of armed-to-the-teeth Israeli soldiers 15 feet away from us — as if our scraggily band of middle-aged folks with a sprinkling of 20-somethings posed any threat to their bulging muscles, semi-automatic rifles, and the other weaponry in their hands.

They had just roughly pushed us up the rocky incline from the lower field where our group had been busy planting olive tree saplings in honor of Tu Bishvat, the Jewish new year for trees. We had regrouped in a small upper field littered with stones after two of our party were dragged off and arrested for not moving fast enough. A few hundred yards behind their line, the sun was highlighting the red tile roofs of the settlement of Talmon.

We didn’t know if they were preparing another advance on us or perhaps were going to hit us with a volley of tear gas and stun grenades, which we heard they had done to a few brave souls earlier in the day — the residual scent was just barely floating on the air. 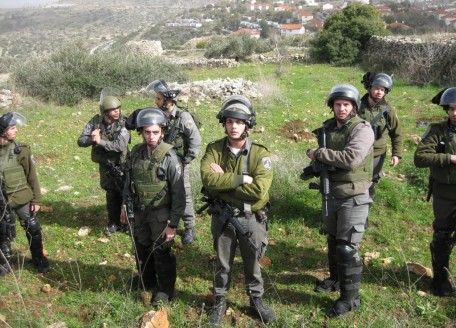 Part of the line of soldiers we were facing. The settlement of Talmon is just beyond the field behind the soldiers.

Then someone, over to my right, softly, tentatively, started whispering a tune. It was barely recognizable, dredged from the memory of my father’s Shabbat table. Then someone else quietly picked it up, “Lo yisa goy el goy cherev, lo yilm’du od milchama.” Another voice chimed in, a little louder. I started humming, then mouthed the words, hesitant, the text from Isaiah still subdued: “Nation shall not lift up sword against nation, neither shall they learn war anymore.”

The soldiers stood there, looking at us, waiting for instructions from their commander. Now a few more singers joined in, louder this time, as we became a small chorus, louder with each repetition of the stanza, as if the words themselves gave us the courage to sing. Rabbi Yehiel Grenimann from Rabbis for Human Rights moved up to the very edge of the rocky dirt terrace where we were standing, closer to the armed line, and a few of us came up next to him, now singing at the top of our lungs. “Lo yisa goy el goy cherev” over and over, never stopping, looking straight into the eyes of those too-young soldiers, a mantra without end.

Then it happened. A few of the soldiers turned and began to move away, slowly. And then, one by one, the rest turned and picked their way through the rocks and over the stone wall at the side of the field, heading back to the houses of the settlement at the bottom of the meadow. And we just kept on singing.

Possession is ten tenths of the law

I suspect our treatment might have been different had our group been composed of just Palestinians. Instead we were a mixed gathering of West Bank villagers, Israelis, and some other nationalities; a few were wearing kippot. We were standing several feet down a slope from the Palestinian village of El Jenia (also spelled Al Jania and El Genia) with a group from Rabbis for Human Rights (RHR) who had come to plant a few hundred olive saplings to replace trees that had been destroyed last October by settlers.

RHR is one of the many reasons there is hope in this land. The Israeli branch, whose members are Israeli rabbis, concentrates on human rights and social justice in Israel. The North American office, while sharing those goals, is also a leader in the fight against human trafficking and the struggle to help migrant farm workers achieve a fair wage and decent work conditions in North America. The organization’s member rabbis, coming from all streams of Judaism, act on the Jewish imperative to protect the rights and dignity of all people. They defend those who are oppressed, basing their actions on the precept that human beings are created in the image of God (b’tselem elokim) and that respect for others is the foundation of Jewish ethics.

That is what brought us to El Jenia. Once a self-sufficient Palestinian farming community of over 1,000 people cultivating large olive groves, the village is now hemmed in by Jewish settlements on the surrounding hilltops. Talmon, the one in front of us just across the field, is the oldest. Founded in 1989, it looks like a beautiful suburb populated by about 200 families. Over the years it has spawned several offspring, all with the distinctive red roofs and orderly rows of houses. It would be a beautiful scene, were it not for the fact that their wealth is at the expense of El Jenia.

Street in the Jewish settlement of Talmon. The contrast between the settlements and nearby Palestinian villages is quite dramatic.

Talmon is built on land that once belonged to El Jenia’s residents. But the fields were taken away long ago by legal schemes designed to expropriate Palestinian lands, almost always without compensation. This is what has been happening all across the West Bank for decades: Palestinian-owned property is declared State Land, for the public good, or requisitioned for military needs, and then quietly transferred to the settlers.

Today the settlements continue to illegally encroach on more and more land. Some years ago a group of caravans (mobile homes) appeared in one of El Jenia’s olive groves, and suddenly a new settlement had sprouted, named Zayit Raanan. Despite this being illegal, the army didn’t remove them. There is an old saying, “possession is nine-tenths of the law,” but in the West Bank it is 100%. It’s like the Wild West; those who have the guns get to decide, and the settlers and the army have the guns.

So the residents of El Jenia can’t work in that olive grove anymore without army escorts (not easy to arrange) to prevent settler attacks. One such example is an alleged attack described below in a 2008 Israeli newspaper account.

According to Hafez Nupal [a Palestinian from Ras Karkar, a village next to El Jenia], he and his son were working in their fields when two settlers riding an ATV [all-terrain vehicle] approached. “One of them yelled ‘what are you doing on this land? God gave us this land and no Arab dog will set foot on it,’ he recounted.

“When the argument began to heat up, one of the settlers pulled out a gun and the other beat me up. I was able to fight back a little, but then the other settler began to beat me up as well.”

Nupal said the settlers, residents of the illegal outpost of Zayit Raanan, proceeded to throw him to the ground, tie his hands and legs together and then tie his son to the ATV.

The settlers then dragged his son, tied to the back of the ATV, through the olive grove. The young man was later taken to a hospital. No one was prosecuted for the assault.

But land theft isn’t the only thing happening. Settlers destroyed olive trees in El Jenia last October and then placed signs on them that read, “The trees are now owned by Israel. Do not approach.” This was not limited to El Jenia. See this report from B’tselem documenting four instances of olive tree destruction and settler attacks during just a few days last fall in the nearby village of Beitillu.

According to the UN, almost 10,000 olive trees were destroyed in 2011 in the West Bank. Most, if not all, belonged to individual Palestinian farmers, devastating them economically. According to the Israeli human rights organization Yesh Din, in recent years police have filed only one indictment against perpetrators of these attacks out of 127 complaints submitted -– and that indictment occurred only four years after the alleged attack. Many Palestinians do not bother to file complaints because of the futility of doing so.

Two days before our group with Rabbis for Human Rights arrived to plant olive trees on Tu B’shvat, residents of El Jenia heard noises at night and went outside to investigate. They found a car spray-painted, its tires slashed. Village walls were defaced with graffiti that read “Death to Arabs” and “Mohammed is a pig.” Several people were seen running through the fields back towards Talmon. 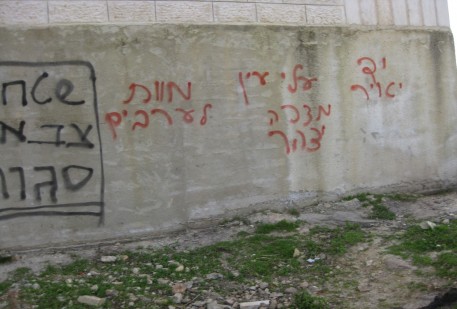 One of the walls with graffiti painted on it in El Jenia. The second phrase from the left says "Death to Arabs."

This village, like so many others throughout the West Bank, is under siege: surrounded by hostile settlements, losing its remaining land bit by bit, and under assault by extremists –- with the army and police providing little protection.

That’s why Rabbis for Human Rights was planting seedlings. It was not just to replace the trees destroyed. Rather, it was to lend support to the residents and to send the message that there are Jews who believe that the ethical and moral values of Judaism are paramount, that how we treat individual people supersedes other religious obligations.

Unfortunately, our encounter on Tu Bishvat did not end with our singing and the soldiers walking away. A short time later they returned, armed with an order that the entire village was a closed military area and that we had five minutes to leave. After consulting with the village’s residents, we peacefully departed. We all agreed it was best to avoid more tear gas and violence.

The story of El Jenia is the story of the West Bank. The settlements are expanding. Violence is rapidly increasing. Home demolitions are rising. The destruction of property is widespread. Besides the human toll, the concern is where this is headed.