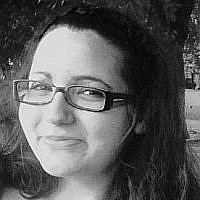 The Blogs
Taylor Jade King
Apply for a Blog
Advertisement
Please note that the posts on The Blogs are contributed by third parties. The opinions, facts and any media content in them are presented solely by the authors, and neither The Times of Israel nor its partners assume any responsibility for them. Please contact us in case of abuse. In case of abuse,
Report this post.

Six months down in the Holy Land today. When my father and I were heading to Logan Airport back in August of last year, he told me that he and my grandparents had agreed to pay all the costs that I would incur if I decided to head back to Boston after six months of being in my program. Six months later, I am still here and I have no intentions to leave, until the late evening on June 27th, anyway. So take that, dad! I kid. But in all seriousness, February has been much better than January. Thank goodness.

Since my study abroad experience was in London during a fall semester, I have experienced Halloween, Thanksgiving, Chanukah and snow in a foreign country. I have experienced all these events in Israel (minus Chanukah since I was in London), and because I am here until June, I get to experience events that I would normally recognize back home during the spring in a whole new way. I had a so-so New Year’s Eve, but at least February’s events have been more meaningful and fun.

I had my first Valentine’s Day/Singles Awareness Day away from Boston. Last year I was babysitting for one of my best clients, received my Certificate of Good Standing, a document I needed for my Israel Teaching Fellows application, went out to dinner with my father and I received a box of chocolates and a stuffed Snoopy with a box of chocolates attached to its chest, a custom that he has done ever since I was a child. This year was different. As Valentine’s Day is much more of an American thing, I didn’t have to have it shoved in my face here. A few stores were selling teddy bears and things with hearts on them, but otherwise I didn’t think too much about it. I gave my students candy and used my iPad to show them pictures associated with Valentine’s Day. I wore a red sweater to school on the actual day and my teacher had the fifth graders wish me a happy Valentine’s Day. Later on that night, my Fellow, Aliyah and I went to the home of Raia and Egal, the Ulpan teachers in our program. Aliyah practiced her singing and we had a lovely (and delicious) Shabbat dinner. Raia makes jewelry as a hobby, so she gave Aliyah and I each a pair of earrings and some cake to take home. We left their beautiful house with full bellies and smiles. Aliyah spent the night with me since my roommate was away in Spain for the week and we watched a movie together. It’s nice to have a Singles Awareness Day and not feel alone.

I’ve finally managed to get relief from the illness that has plagued me since New Year’s Eve. I have had three different visits with two doctors and had been prescribed a whopping eight medications. Some offered momentary relief, but my barking cough kept coming back. My madrichim were doing scheduled meetings over the month, so when I finally had my meeting with my madricha after it kept being rescheduled, my illness had come back. I begged her, almost in tears, to send me to a real doctor. She got me an appointment for that night with an amazing doctor who has an office in her house. She told me I had what I suspected I had—acute bronchitis. Maybe I’m the only person I know who is happy to have a diagnosis because it means I’m not going crazy. The doctor didn’t prescribe symptom relief medicines; she prescribed antibiotics and put me on bed rest for two days. She said if I wasn’t better in a week then I should come back and she’d give me an inhaler. My antibiotics cleared up my cough (although it pops up sometimes since everyone and their mother smokes) and I can finally breathe. It’s made the month much better.

This past Sunday, ITF-Netanya, ITF-Be’er Sheva and ITF-Beit She’an met up for our halfway seminar. We went to the Israeli Children’s Museum in Holon and saw a spectacular exhibit called Dialogue with Time. The exhibit was about the aging process and I took a lot away from it. Later on we were able to explore Jaffa for a bit, attended a lecture about becoming bone marrow donors (I’m already on a US registry), learned about African Jews’ wedding customs and did karaoke. It was a long day, but what stuck with me the most was the session each group had with their madrichim before dinner. We had to answer questions about all the months we had been here and what moment impacted us the most. I answered Masa Israel and all the chances they’ve given me. I listened carefully to all the responses, but one of the girls’ had hit close to home. She said one of the reasons she came here was because she was trying to run away from issues that home, but that the issues still plagued her. This was something I knew too well in London; I could loose nineteen pounds and wear all the make-up I wanted, but issues back home and how I handled things like drinking and being around men were still the same as they were back in Boston. I’ve learned you can change the scenery, but not the situation. At least with Israel, I haven’t had as much to run from. I still rarely drink and still am learning my way when it comes to men. But at least this time my cohort behaves like adults and supports me in these complicated endeavors. I am forever grateful.

They cry when they don’t get their way, pulling back and letting go with a whine like a rubber band. They stretch out the fake and let it fling through the air.

They are figuring out who they are.

And they are occasionally naughty. But they are naughty in the way that makes me, much of the time, feel happy rather than fussy.

Six months into Israel, I count my blessings. Masa Israel continues to give me the opportunities that college and London denied me. I spent a Thursday night in Tel Aviv learning how to promote Masa to future Birthright groups and I have had two more sessions of my Masa Israel Activism Fellowship. I greatly enjoy being a Masa-Kol Voice-IAN Fellow and continue to learn more about how to be an Israel activist. With college campuses doing their misguided and ill-informed “Israel Apartheid Week,” I see just how much I need a job in Israel activism when I go home. This is something I can truly see myself doing professionally, not just getting into arguments over Facebook.

At least with Kol Voice, I am learning the skills that can prepare me to debate in front of people and not behind a computer screen. What I don’t know about Israel, as the ever ubiquitous “they” say, could fill volumes. And my lack of knowledge has filled quite a few of the blog, Twitter and Tumblr posts I’ve written.

Part of the difficulty of being an activist for Israel is trying to go back and forth between ambition and humility. Ambition in the work is imperative. Ambition for position in the Israel activism world is quite another thing.

Expectations of being understood by anti-Israel folks and their bands of ignorant followers or success in winning arguments against these people are, quite in fact, inevitably destined to meet with disappointment. Good intentions are not immediately recognized by others.

Humility enters into things for me with the fact that I will have times where I fail to accomplish what I want to do as an Israel activist. That is not a pleasant fact, but it’s a very real one. I need a job in this field that allows me to reach more people than just the people on my Friends List. I hope the world is listening and can lead me in this direction.

With February coming to a close tomorrow, at this point, I feel like I could write a tourist brochure for Israel. This country smells adventure and life. Everything smiles beautifully—the apartments, the palm trees and the plethora of fruits and vegetables in the shuk. The sunsets are supernatural in their beauty and have a way of making moods soar.

I have gotten into the habit of relishing the sun and Israel doesn’t disappoint. I am amazed by the sun’s colors, more saturated than I can imagine. Every shade of the sun—rose, crimson, tangerine and yellow—make the air smell fresh and the breeze feel warm.

I also feel like I could write quite a persuasive argument for leaving Massachusetts for ten months in order to teach children English and to give back to Israel. Nothing is quite as therapeutic as going over life’s minutiae with my students, beginning with a hot cup of coffee as the sun emerges from behind the clouds, and ending the school day with a de-stress session at the gym as the light turns into dark.

Without having a boyfriend or any big commitments back in Massachusetts, being in Israel lets me look around. Six months of feeding friendships and my soul, of walking around Netanya and loving Israel, are powerful injections against sadness that sometimes happen.

Six months down in Israel and everything is pretty stable. And a tiny bit boring. I still have commitments here like volunteering, group activities and Ulpan. At least inside me, there continues to be growth and this growth trails through all kinds of imaginings and the nice comfort of a stable routine. And I feel like I ought to write about that instead.

About the Author
Taylor Jade King spent 10 months in Netanya from 2013-2014 as a Masa Israel Teaching Fellow and holds a master's degree in Communication: Public Relations and Advertising from Suffolk University in Boston. She loves her Dunkin' Donuts coffee, Krembo, banana leaf print and 90's nostalgia.
Comments