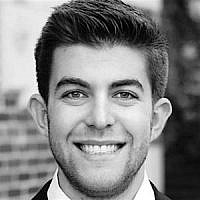 The Blogs
Jason Selby
Apply for a Blog
Please note that the posts on The Blogs are contributed by third parties. The opinions, facts and any media content in them are presented solely by the authors, and neither The Times of Israel nor its partners assume any responsibility for them. Please contact us in case of abuse. In case of abuse,
Report this post.

College is a marketplace of ideas, where people from all walks of life are thrown into a bubble and taught to live and operate together over the course of a few years. Any recent graduate will tell you that experiencing campus life is as important, if not more important, than any lesson a class or professor can teach. With that said, welcoming all groups is of the utmost importance to maintaining the longevity of this so-called marketplace.

Students for Justice in Palestine needs no introduction. Their coalition has been polarizing ever since its inception over ten years ago, and it seems to be growing more in the same sense.  However, this new fad, for lack of a better term, from SJP activists saying that they aren’t anti-Semitic, but rather, anti-Apartheid or the plethora of other choice words they use to hide their true colors, is completely bogus.

According to the Anti Defamation League (ADL), anti-Semitism is determined as the following: “The belief or behavior hostile towards Jews because they are Jewish. It may take the form of religious teachings that proclaim the inferiority of the Jews, for instance, or political efforts to isolate, oppress, or otherwise injure them.”

Given the above definition, can someone please explain how any SJP activist in their right mind can claim that their efforts are not anti-Semitic, when the core of their existence rides on pushing Boycott, Divestment and Sanction (BDS) legislation, and suppressing the Jewish voice on campus?

Before I go on, I must say that I am pro-Palestinian. I always have been and always will be, and it is my firm belief that no deal of peace will ever be reached if either side is unwilling to recognize the other’s right to a state. And since the Israeli Government now, and in years past has recognized the right of Palestinians to have their own state, but at the same time that not being a feeling reciprocated by Palestinian leadership, it’s easy to see why there is a big issue here. But that is not the point of this article – the point here is that SJP is a group filled with, and motivated by Jew hatred, and it needs to stop… NOW.

The debate on whether BDS is anti-Semitic is a waste of time – because it is anti-Semitic, PERIOD. There has never been a BDS resolution on college campus that has encouraged two-sided dialogue, but rather, it discourages such dialogue and encourages the removal of the Jewish voice from campus. If you don’t believe me, just look at what is going on right now at the University of Ontario Institute of Technology (UOIT). I’d like to issue a challenge: show me language from a BDS resolution that calls for bilateral dialogue on the campus in which it is being pushed. The moral high ground is being taken by Jewish students when it comes to this matter, considering the fact that they have never tried to pass legislation that removes even those who exhibit direct attacks towards their livelihood and well-being.

Yesterday, SJP made headlines across the world for their supposed lists of Jewish students that they have created. These lists, which have yet to be released, supposedly include names, along with contact information and dorm details. Since when did SJP get into the business of connecting Jewish students from campus to campus? If these lists are to be released, I expect a full explanation on the uses for, and purposes of such a compilation.

With that said, I urge Jewish students, and supporters of the Jewish narrative to not jump to any conclusions yet regarding these so-called lists. If they do exist, it’ll simultaneously combust in their own hands. SJP supporters are fueled by their own hate, and furthermore, they derive motivation from supporters of the Jewish state prematurely responding to reports of information like said lists. Consistency is key here, in that we have seen students take the moral high ground when it comes to responding to BDS on campus – the same must be done here.

About the Author
Jason is a recent graduate from the University of Oregon, and now works for a major Jewish non-profit in the United States. Ever since his childhood, Jason has enjoyed working with and helping others. Over the past five or so years, Jason found his calling in the Jewish community - he now gets the chance to work with and inspire the next generation of young, dynamic Jewish leaders on American college campuses. A zionist at heart, Jason sees the ugly battle being waged against Jews across the globe, and he feels like it is his obligation to defend those who have sacrificed everything to give him and others the platform to share their narrative.
Related Topics
Related Posts
Comments