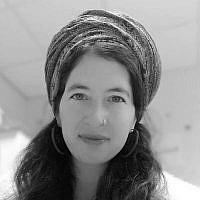 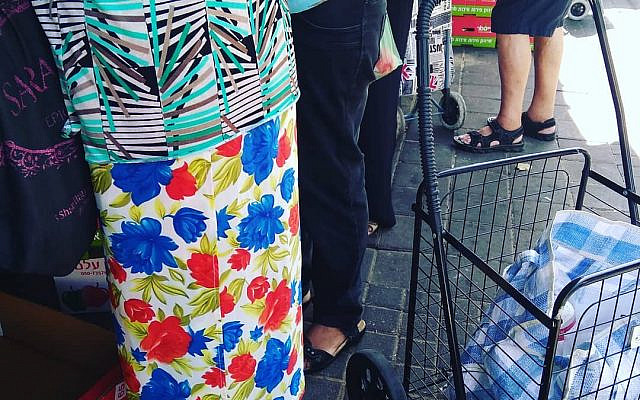 The day before Rosh Hashana, and the shuk in Netanya is seemingly filled with old women. They’re all wearing these horrible outfits, tops and bottoms garishly clashing, but they’re rocking it. I am so impressed by this one woman’s outfit that I take a picture of her, from the neck down, at a fruit stall.
Then she starts talking, this 90-year-old woman, bird-like and beakish and befuddled, saying the same thing to the fruit vendor over and over and over again, insisting romana romana romana, and so he gives her a pomegranate bursting with ripeness.
But that’s not exactly what she wants, though maybe it also is, because now she is speaking to him rapidly in a dialect with Hebrew, French, and Arabic words thrown in, but she has become agitated and is speaking quickly. Everyone around the fruit stall is trying to help but none of us knows what she wants, and I begin to wonder if she knows what she wants.
It turns out she wants one red apple. So the fruit vendor gives her one apple and one pomegranate, both on the house. Because I know her, yes? he whispers to me, watching me watch this scene, subtly pointing a finger to his gently tilted head.
Tunisian, he answers me after, his brown fingers tracing history across my pale skin as he passes me my change. Skin I once thought marked me as Jewish, though now I know differently. I say Shana Tova and tizkeh l’mitzvot, because it doesn’t matter that I don’t know if he is a Jewish Arab or a Muslim one.
Meanwhile, the woman has shuffled halfway down the shuk and I wonder does she have any plans for the holiday, and where is your family, and, vaguely, should I chase after her? I don’t speak Tunisian, but… While I am wondering, her Filipina helper has caught up to her, and they walk off together, their outfits printed with patterns so garish and clashing that they almost make sense together.
I am in love with this place. It is a state of being. Sometimes this brings me extreme joy, my heart full like the very ripest pomegranate at the fruit vendor’s stall. And sometimes it feels like my skin is on inside out; that I’m made wrong somehow and my nerves are too exposed. And sometimes, when I see this scene and all the others like it, I feel both at the same time.
About the Author
Idit writes from her goat farm in Israel's Ella Valley.
Comments