“He had a vision in a dream. A ladder was standing on the ground, its top reaching up towards heaven as Divine angels were going up and down on it.” (Genesis 28:12) 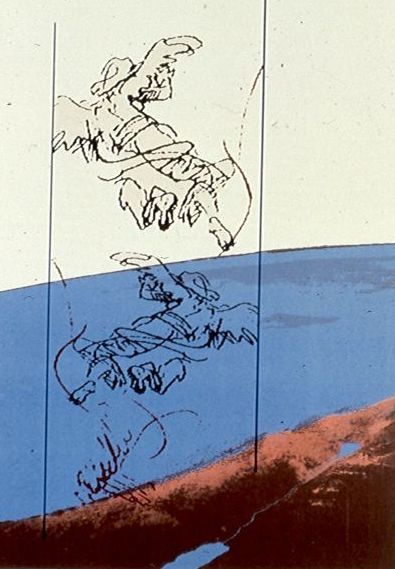 My last week’s Times of Israel article describes how I created a faxart event in 1987 using these same digitized Rembrandt angels to connect Long Island to mainland USA. Two years later, I sent a digitized Rembrandt angel on a flight around the globe using AT&T satellites. The cover of my new book Through a Bible Lens: Biblical Insights for Smartphone Photography and Social Media displays the Rembrandt angel images from my Israel Museum serigraph (See http://throughabiblelens.blogspot.com.) However, it shows the same two angels flying out from a smartphone screen. Fax technology has morphed into the Internet, smartphones and social media.

I am exploring how to celebrate my book launch in January by demonstrating how smartphones have the power to make this biblical vision a reality. I’d welcome suggestions from smartphone/social media savvy readers of this article on ways to creatively disseminate these angel images from the Land of Israel to cities throughout the world. Send them to melalexenberg@yahoo.com.

Since my pioneering faxart projects are conceptually relevant today, let’s take a look at how I flew a digitized Rembrandt angel from the AT&T building in New York, to Rembrandt’s studio in Amsterdam, to Tokyo were fax machines were made, to the City of Angels – Los Angeles, and back to New York. My circumglobal faxart event was followed in 60 newspapers, in three thousand copies of AT&T’s Annual Report, and by ten million viewers of news stories on all the major TV networks covering the cyberangel’s return to New York. 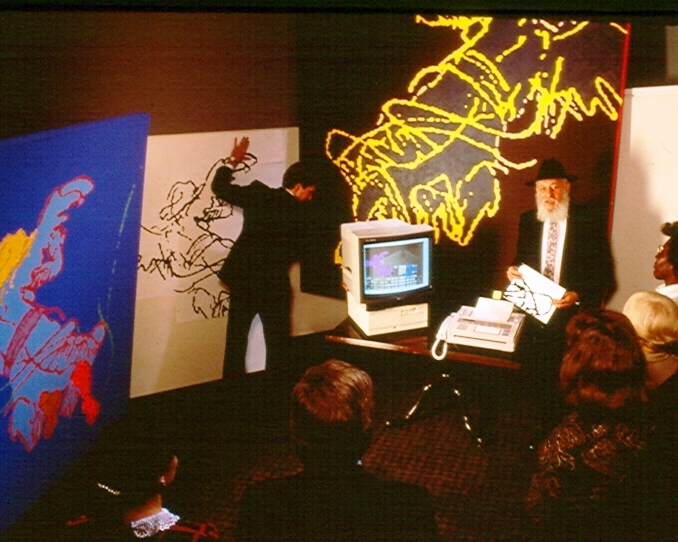 Working with Rembrandt’s angels, reminded me of the small etching he had made as a book illustration showing angels going up and down the ladder in Jacob’s dream. It was in the only book he had illustrated, Piedra Gloriosa/Even Yakar (Glorious Stone in Ladino and Hebrew), a kabbalistic book written by his neighbor and friend, Rabbi Menasseh ben Israel. I wanted to do something to honor Rembrandt. On October 4th, it would be the 320th anniversary of his death. Jewish tradition honors people on the day they complete their lives rather than on their birthdays. It’s like applauding after seeing a great play instead of when the curtain opens. It dawned on me that I could applaud Rembrandt best by having his winged angels wing their way around the world.

I phoned AT&T. I asked if I could use their telecommunications satellites to send a cyberangel on a circumglobal flight. “You have what to send around the globe?” was the usual response as I was transferred from office to office. Incredulity was turned to interest when I reached the director of the Infoquest Center, AT&T’s technology museum on the ground floor of their postmodern building designed by Philip Johnson. I took a clangorous subway train across the Manhattan Bridge to present my proposal. The public relations people liked the idea and AT&T agreed to sponsor my memorial faxart event.

I flew to Amsterdam to meet with Eva Orenstein-van Slooten, Curator of Museum het Rembrandthuis, the artist’s home and studio. With trepidation, I proposed having a fax machine placed on Rembrandt’s 350-year-old etching press to receive the angel that would fly there from New York. She thought it was a wonderful idea. It would make her museum, a quiet place, come alive as Rembrandt’s angel rematerialized in the place he had originally created it.

On the morning of October 4th, his angel ascended from the Chippendale top of the AT&T building in New York. It flew to Amsterdam to Jerusalem to Tokyo to Los Angeles, returning to the former New Amsterdam on the same afternoon. It took an hour in each city to receive 28 pages of angel fragments and fax them on to the next city. After a five-hour flight around the planet, the deconstructed angel was reconstructed for the fifth time at its starting point. When it passed through Tokyo, it was the already the morning of October 5th. After the line printed out on the top of the fax “Tokyo National University of Arts and Music, 5 October 1989” was the line “Museum of Contemporary Art, Los Angeles, 4 October 1989.” Cyberangels can not only fly around the globe, they can fly into tomorrow and back into yesterday. They reshape our concepts of time and space in ways that correspond to the vision of kabbalists centuries ago.

The cyberangel was received at Rembrandt’s house seconds after it left New York. It came as 28 sheets, each with an abstract fragment of the angel image. Ms. van Slooten feed the sheets back into the fax machine on Rembrandt’s etching press and dialed the fax number of the Israel Museum in Jerusalem. She then assembled all the fragments into a whole 4 x 6 foot angel.

Jerusalem was the appropriate next stop since it is an angel from a biblical scene. It was evening when the cyberangel arrived. Amalyah Zipkin, Curator of European Art at the Israel Museum, sent me a description of the angel coming and going. She wrote:

“There is something appropriate in the illogic of the event: here we were in Jerusalem, the Holy City of 4000 years of turbulent history, huddled next to a fax machine in the mail room of the Israel Museum. It was a few days before Yom Kippur. Somewhere out there in technological space, a disembodied angel – computerized, digitized, enlarged, quartered, and faxed – was winging its way towards us from Amsterdam. This angel had been drawn in the 17th century by a Dutch artist with the instantly-recognizable mass-media name of Rembrandt van Rijn, and had undergone its electronic dematerialization 320 year after the artist’s death as the hands of a New York artist and technology freak who had the audacity to make the connections: Rembrandt, the Bible, gematria, the electronic age, global communications, the art world, and the fax machine. Like magic, at the appointed hour the fax machine zapped to life and bits of angel began to materialize in Jerusalem. Photographs and the attendant PR requirements of contemporary life were seen to, and the pages were carefully fed back into the machine. We punched in the Tokyo phone number and the angel took technological flight once more.”

It was almost dawn on October 5th when the angel arrived in Tokyo in the Land of the Rising Sun where fax machines are made. Ikuro Choh of Tokyo National University of Arts and Music received the angel and revealed its full image by assembling the 28 sheets on the ground among the ancient pillars in Ueno Park. He then disassembled them and attached all the sheets end-to-end in a long ribbon ascending the stairs and entering into a centuries-old religious shrine built in traditional pagoda style. The old Tokyo site was selected to carry a spiritual message of electronic age homage to tradition. Ikuro Choh laments, “not only in Tokyo but everywhere in Japan, the traditional and the old are being destroyed at a ferocious speed, making the culture of paper, wood and bamboo evaporate like a mist, allowing the ugly demons of concrete to appear in its wake.” With the sun rising over Japan to begin a new day, the faxart angel rose over the Pacific Ocean to fly into yesterday. It arrived in the City of the Angels at 2:40 p.m. on October 4th. The angel came together once again at the Museum of Contemporary Art in Los Angeles on the day before it had visited Tokyo.

The cyberangel returned to New York five hours after it had left. It had entered tomorrow before flying forward into yesterday. Camera crews for all the major television networks welcomed the cyberangel’s return from its circumglobal flight. It was broadcast on the national news from New York that evening. After having flown around the world, the cyberangel simultaneously visited millions of homes across North America. Associated Press covered the faxart event, too, sending the angel image and story over its wire services. Sixty newspapers carried the AP story, each with a different headline. It even made the front page in Billings (Montana), Marion (Ohio), and Selby (North Carolina). AT&T made it the feature of their annual report. They distributed three million copies showing me, a gray-bearded Jewish artist sporting a Hasidic black hat, welcoming the cyberangel on it return from its high tech flight around our planet.

Lucy Lippard’s words in Mixed Blessings: New Art in a Multicultural America best summarizes the postmodern concept behind the computer angel story: “I am interested in cultural dissimilarities and the light they shed on the fundamental human similarities,” as well as “art that combines a pride in roots with an explorer’s view of the world as it is shared by others.”