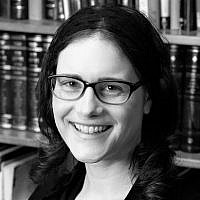 The Blogs
Aviva Richman
Apply for a Blog
Advertisement
Please note that the posts on The Blogs are contributed by third parties. The opinions, facts and any media content in them are presented solely by the authors, and neither The Times of Israel nor its partners assume any responsibility for them. Please contact us in case of abuse. In case of abuse,
Report this post.

I can’t help but read the news these past few days in light of the chapter of Talmud I taught this summer at Mechon Hadar. The Talmud discusses how to relate to statues that might be idols, or may have been used for idol worship.

The Talmud asks: How is it possible to negate the power of statues that represent what we abhor?

There are two potential pathways. One that is perhaps more obvious, and certainly quite explicit in the Bible, is to physically obliterate the statue. The other pathway that evolves in rabbinic interpretation is more subtle and less violent, but actually more powerful. The status of a statue can be negated by a shift in how the statue is treated — decommission of the statue by those who worship it so that it is no longer treated as sacred.

One of the ironies in the rabbis’ discussion is that while one might think smashing an idol is the best way get rid of it and destroy its power in the world, this is not so simple.

There is a debate about whether a broken idol loses its status just by virtue of being physically broken (AZ 41a). One rabbi says that even if a statue was broken, a person who worshiped it must still explicitly renounce it to negate its status. Another rabbi says that if it is broken one can only assume that its worshiper will realize it has no power — “It couldn’t even save itself so how can it save me?”

What emerges from the Talmud’s discussion is that the most powerful way to get rid of an idol is for those who worshiped it to renounce it, to stop treating the idol as sacred. Even if an idol is smashed to pieces, its destructive force lingers until this mental and behavioral shift occurs.

This has all been on my mind as I read through headlines and confront graphics about removing statues that pay homage to the Confederacy. I grew up in Baltimore, Maryland and often went to “Robert E. Lee” park for a pleasant walk in the woods or a picnic. From a young age, I remember staring at the Confederate Women’s monument at a busy intersection and wondering what the significance of the confederacy was. The fight against slavery seemed such a thing of the past. Obviously, the difficult work of socially living up to anti-racist ideals is not over, but the monuments hardly seemed anything that people in the present actually honored as concrete expressions of the values they upheld. To use the language of the Talmud, I would have told you that these monuments and what they stood for were renounced and essentially nullified. No one treated them as sacred any more.

Seeing the conflict that arose over removal of confederate statues in Charlottesville and the ensuing aftermath, what is perhaps most striking to me after studying the laws of idol smashing this summer is that those monuments I grew up with are not in fact nullified; there are still people who consider what these statues represent to be a sacred part of their identity and inheritance.

On the one hand, this means that when I woke up on Wednesday to find the headline that Baltimore confederate monuments had been removed it seemed only appropriate. If the statue is not nullified then it must be physically eradicated. On the other hand, there is the haunting realization, so pervasive in the Talmud’s discussion, that destroying the statue doesn’t do the real work, it doesn’t get rid of the mindset of those who worship it.

What we already knew, but really cannot afford to ignore, is that it is not possible to walk around thinking “oh that’s a pretty statue” and fail to recognize that the supremacist values that animated the statue remain alive and well. But we also can’t delude ourselves into thinking that getting rid of monuments will destroy their power. The statues are not the real issue here. We need a president to publicly renounce their sacred status and pave the way towards a total shift in mentality – absolute disavowal of the abhorrent pieces of history and ideology these statues represent. The president’s affirmation of these statues only creates more of a need to get rid of them, and more importantly to confront those who want to re-animate the worldview standing behind what I thought were harmless lumps of stone.

About the Author
Rabbi Aviva Richman is on the faculty of Mechon Hadar, an institute of advanced Jewish study in Manhattan, and is a PhD candidate at New York University writing on sexual coercion and consent in the Talmud.
Related Topics
Related Posts
Comments