The recent media onslaught and accusations of Nazi links against US President Donald Trump’s counterterrorism adviser, Dr Sebastian Gorka, seems to highlight the alarming decay of US media and the return of yellow journalism.

According to the State Department’s history website, “yellow journalism was a style of newspaper reporting that emphasized sensationalism over facts. During its heyday in the late 19th century it was one of many factors that helped push the United States and Spain into war in Cuba and the Philippines, leading to the acquisition of overseas territory by the United States.”

The website acknowledged that the dramatic style of yellow journalism contributed to “creating public support for the Spanish-American War, a war that would ultimately expand the global reach of the United States.”

With the current hysteria in the Beltway regarding the “Russia threat”, and opposition to the Trump administration’s proposal of working with Moscow to counter ISIS and the trans-regional Salafi jihadist movement, one wonders if this is a repeat of history goading the “indispensable nation” into another war.

Interestingly, the Council on American-Islamic Relations (CAIR), a controversial organization that moderate Sunni ally the United Arab Emirates has listed as a terrorist organization for its ties with the Muslim Brotherhood, has allied with some of these media outlets in their attempts to oust Seb Gorka. This is eerily similar to how they had coalesced to oust Michael Flynn – another Trump adviser who understood the expediency of working with Russia to counter Salafi terrorism in Syria and help stabilize the Middle East. 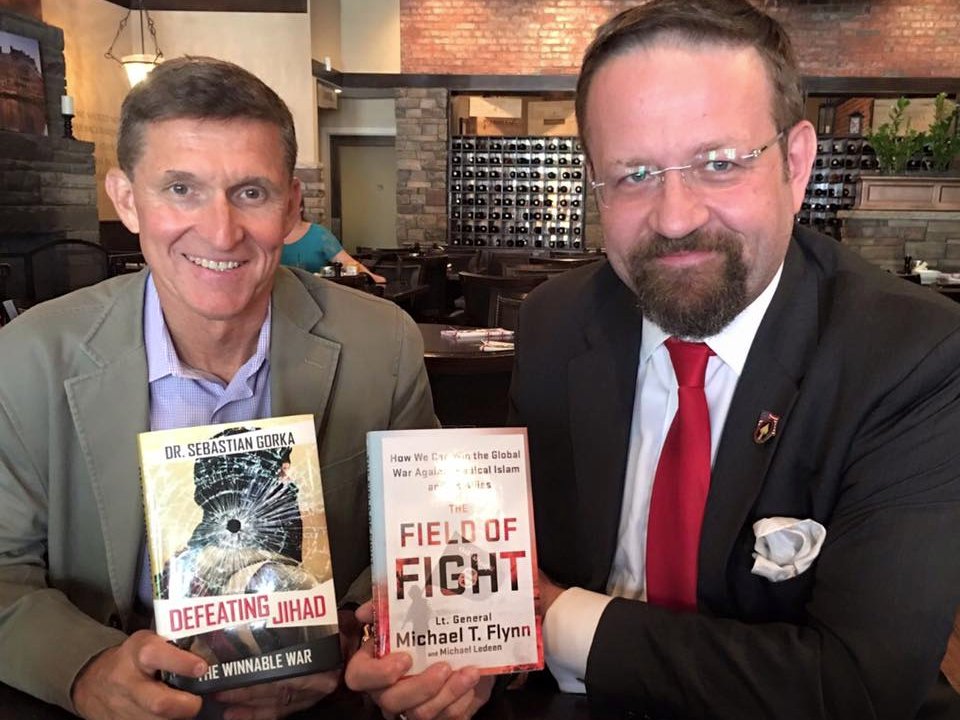 However, it seems CAIR has a stake in overthrowing the Syrian government and installing a Muslim Brotherhood–type replacement, similar to what happened with Egypt and Mohamed Morsi.

In 2012, CAIR leader Yaser Tabbara was the spokesman for the Syrian “opposition” that was already infested with al-Qaeda and Salafi extremists, and worked closely with the Barack Obama administration to topple the Syrian government. However, the entry of Russia into the Syrian conflict in 2015 complicated the regime-change agenda, and in December 2016 when CAIR’s Los Angeles director Hussam Ayloush revealed his disdain for Russia and celebrated the deaths of 92 Russians in a jet crash en route to Syria – consisting mainly of 60 musicians, with some journalists and doctors – he received a swift rebuke and condemnation.

Perhaps we are witnessing a resurgence of the regime-change interventionists and yellow journalism.

Already there has been an unhealthy uptick of news stories misrepresenting facts to mislead the American public and undermine the current administration’s policies. These new policies include reversing the Obama administration’s regime-change operations in Libya and Syria that further empower ISIS and al-Qaeda, and not supporting the North Atlantic Treaty Organization (Nato) as an instrument to provoke Russia unnecessarily or for “warmongering”, in the words of German Foreign Minister Frank-Walter Steinmeier.

For example, in addition to US news coverage, Netflix and most recently HBO have shown films documented by the al-Qaeda-linked White Helmets to demonize the Syrian government as a human-rights abuser that needs to be toppled, similar to the 2003 campaign to overthrow the Iraqi government over the false existence of weapons of mass destruction.

Then there was the media blitz that President Trump snubbed German Chancellor Angela Merkel by refusing to shake her hand during her state visit, despite the fact he did shake her hand. Is the insinuation that perhaps because she supports Nato more than he does, and since he is supposedly a supporter of Russian President Vladimir Putin, he thus won’t shake her hand? 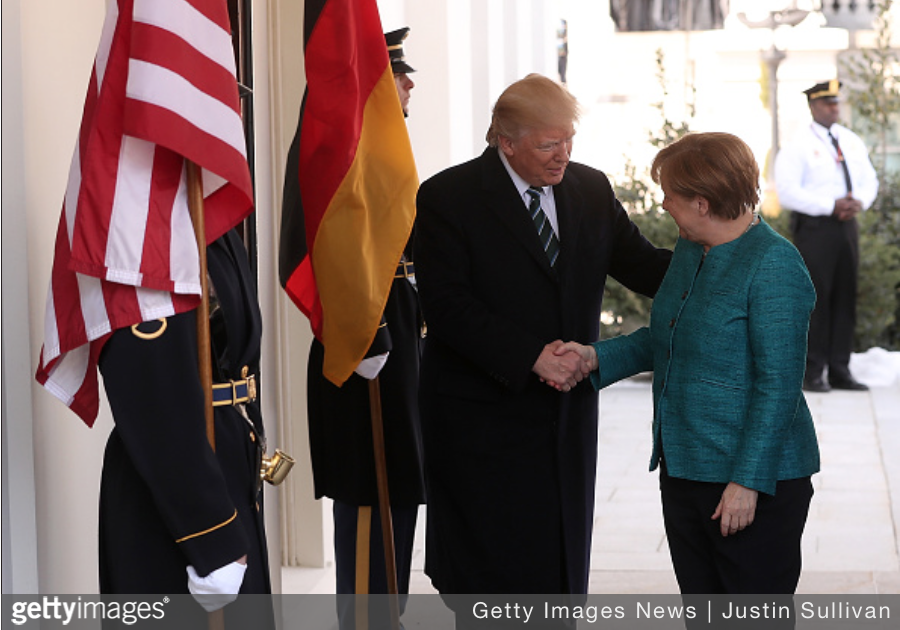 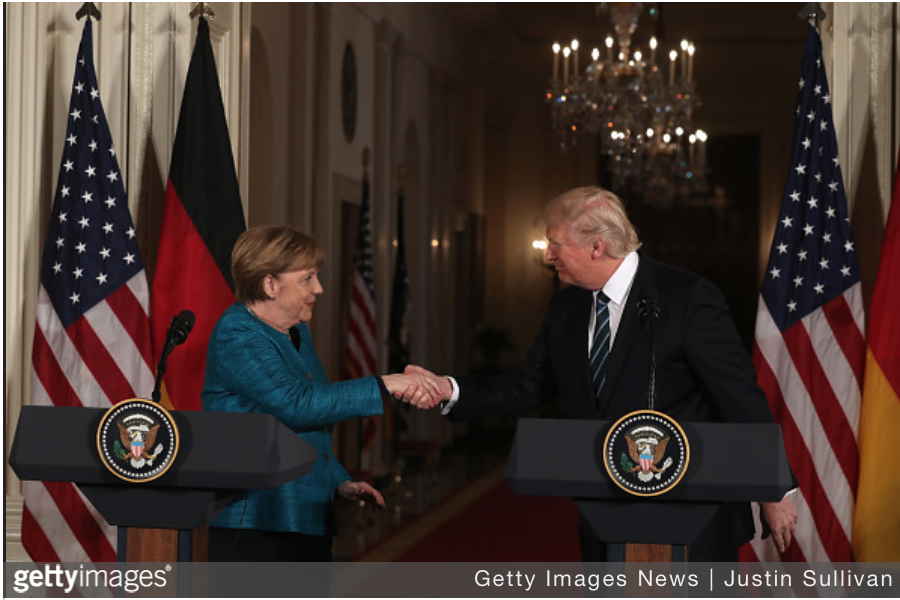 President Trump and German Chancellor Angela Merkel shake hands at a joint news conference in the East Room of the White House, March 17, 20217.

Now Senator Rand Paul is the latest casualty in this Beltway anti-Russia hysteria, with fellow Senator John McCain accusing him of working for Putin simply by voting against admitting Montenegro to Nato, thereby putting additional burdens upon the shoulders of American soldiers and taxpayers to extract more blood and treasure.

Never mind that Senator Paul explained the folly of expanding “the monetary and military obligations of the United States given the burden of our $20-trillion debt”, with US troops already fighting endlessly in regime-change target countries of Iraq, Syria, Libya, Yemen, Afghanistan (and drone strikes in Pakistan), pledging to defend East Asian allies in addition to the 28 countries in Nato, and maintenance of some 800 military bases in more than 70 countries.

A house divided against itself cannot stand, and this unhealthy partisan environment only serves to paralyze US leadership and effectiveness in the international community. The current anti-Russia and anti-China hysteria is also unhelpful given they both of those countries have legitimate security interests in Syria and the Middle East, especially after years of US support for the Syrian “opposition” that includes anti-Chinese militants.

Now it may be prudent to have a paradigm shift away from a zero-sum cold-war lens, to one of how in a multipolar/multi-partner world, Russia, China and the rising rest can supplement Western efforts to address the global pandemic of ISIS and Islamic extremism. Otherwise, with various al-Qaeda groups from China, Russia, and Central and Southeast Asia having merged with ISIS in Syrian jihad, should the US and Russia stumble into a military conflict, ISIS may actually come out the winner. 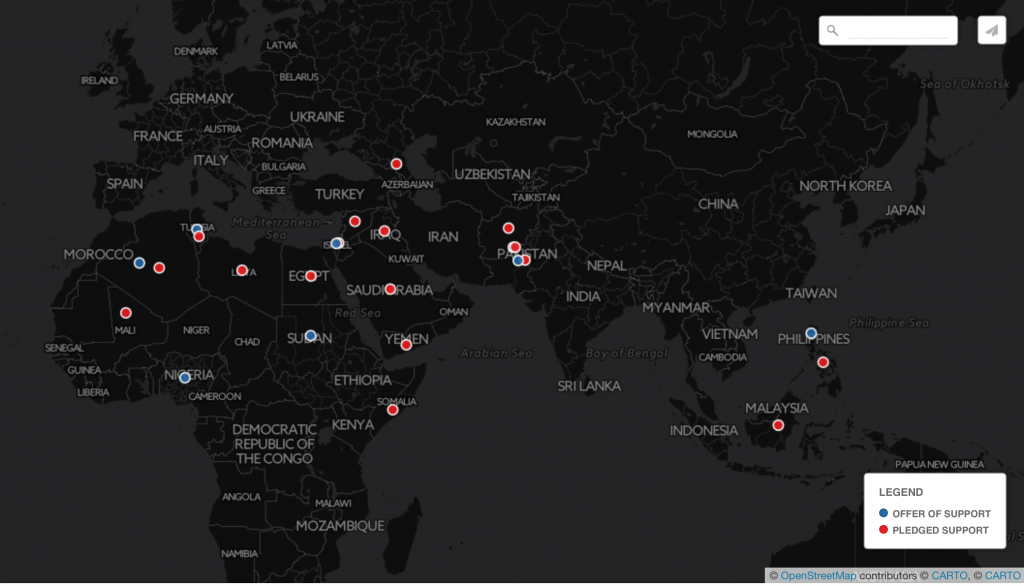 Three dogs and a bone

Chinese strategist Liu Mingfu noted in the 20th century that Britain fought and won a war against Germany, but was so weakened and brought to its knees that it ceded its hegemonic position to the United States. Two dogs fought over a bone, and a third ran away with it – the US. Now if Washington and Moscow end up fighting over a bone in the Middle East rather than coalescing to counter the global threat of terrorism, the third dog that runs away with the bone may be ISIS, with a clear path then to realize its global caliphate.

As for the stories bearing false witness against Gorka, many who know him are already stepping forward to testify on his character and the truth, including this author. I first knew Dr Gorka in 2011 as a fellow in the National Security Fellows Program, which he directed at the Foundation for Defense of Democracies (FDD), known for its research in support of Israel, US national security and counterterrorism. There he tried to instill in the fellows – selected mainly from the US defense and intelligence sectors – a sense of urgency to combat fascism and racism in all forms, and he has consistently written and spoken out against them since then.

It is thus both comical and tragic that his detractors would paint him as an anti-Semite or Nazi sympathizer and, sadly, help usher the US into a disturbing new era of yellow journalism.