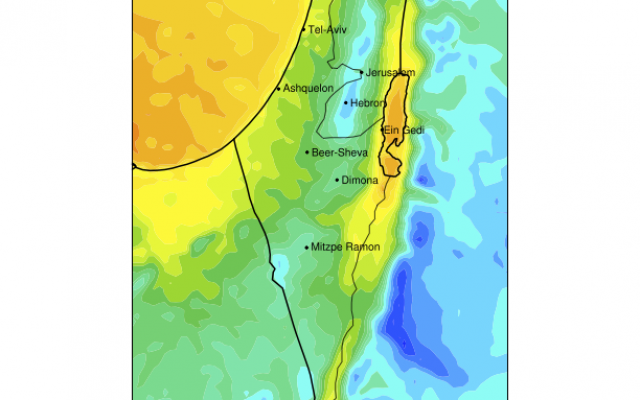 A very, very cold day forecast for Tuesday March 15th, 2022 (Courtesy of Weather It Is, LTD)

It’s cold in Siberia and it’s going to be cold here, too. Of course, cold is relative. On the other hand, for a week in mid-March, you can imagine that folks would wonder where is Spring?

Well, the point is that it’s cold in Siberia and there’s a pipeline of cold air headed our way. Temperatures will drop further today in the layer of atmosphere just above the sunlight heated planetary boundary layer, and then further Monday night and Tuesday. In fact, the temperatures will be more typical the coldest of any of January’s days (see Tuesday’s minimum temperature forecast map).

At the same time, an upper level trough of (cold) low pressure will nose it’s way southwestward into northwest Syria. The counterclockwise flow of cold air around the low pressure trough will bring moisture on shore, while the extreme cold keeps much of it as snow in the higher elevations of Jerusalem and surrounding areas. Right now, our model shows snow late Monday night in Tuesday afternoon, with the best time for an accumulation before too late Monday morning (the cloud-shielded midday sun will probably act to melt the snow). Depending on just how far west the upper trough makes it, will determine if the snow continues into the evening, and accumulates some more.

Right now, we’re right on the edge temperature wise, in terms of a snow accumulation in much of Jerusalem. We just can’t say yet whether it will snow and accumulate. What isn’t in doubt is the cold.  Darn those mittens and hats, and make sure your all your jacket buttons are accounted for.