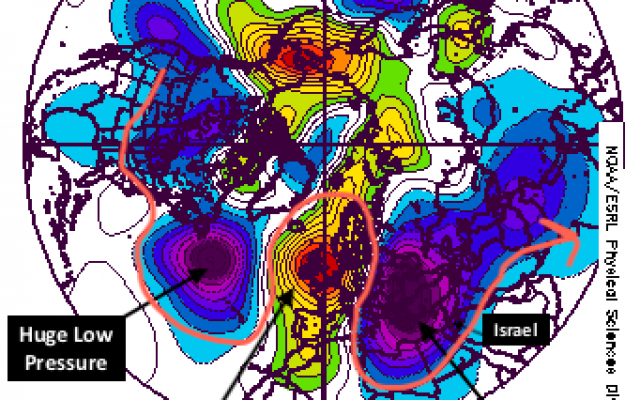 Composite of Circulations From Past Jerusalem Snow Storms

A lot of words have been written over the last several years, and a lot of (snow) hopes dashed.

We hope that this will not now be the case.

Since the beginning of February, we’ve been speaking about a cold period to arrive in mid-February.  Indeed, this has been the subject of our “Israel Winter Weather” group since then. I wish I could have told my blueberry plants to hold off on blooming despite the early February warm weather. But, they don’t have access to our weather discussion.

An unusual series of events has created changes in the global circulation that should lead to our best chance for snow in Jerusalem since 2015.  The same series of events, initiated by a Sudden Stratospheric Warming (SSW), has led to an unusually long snowy period in the New York Metropolitan Area. It basically involves (as shown in the graphic from Jonathon Hoffman’s Facebook page) a large ridge of higher pressure extending from Alaska, across the north pole,  through northern Europe and then into the southern Mediterranean.  To the west of the European high is very strong low pressure that has become stationary.  To the east, the disturbance in the Jet Stream caused by the SSW has pushed plenty of cold air southward into Siberia, which extends in the graphic southward from Siberia into our area.  Indeed, the forecast is for unusually cold winter air to flow into our area starting on Tuesday the 16th.

Currently, the forecast is indicating the greatest chance of accumulating snow on Wednesday the 17th of February into Thursday the 18th of February. The unusually cold weather should remain with us until Sunday the 21st.

It often happens that the first cold wave is followed by another a couple of days later. There is a hint of this, which would bring back snow or a very cold rain on Shabbat.

Keep in mind that the potential snow event is about a week into the future, and only in December of 2013 was I able to forecast snow in Jerusalem so far in advance. Yet in that sense, such a similarly strong signal is a positive sign in terms of forecast accuracy.   Also, the global forecast models have improved dramatically since then, giving us greater confidence in even a forecast seven days in advance.  This also enables even greater accuracy in our high resolution forecasts that we’ll create just prior to the event, if the situation still warrants. These forecasts will be used to predict the most likely snow amounts.

Until then, be well,