On 13 October SOAS Palestinian Society was due to hold a discussion on the topic of “Decoupling Judaism and Zionism in Palestine Advocacy“. 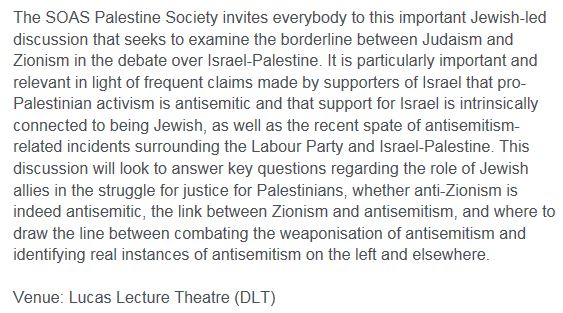 The event was to feature four speakers who self-identified as Jews. Presumably they were going to argue that Judaism and Zionism have nothing to do with each other. (The truth of course is that they have everything to do with each other).  Presumably none of the four was from Neturei Karta.  Although Neturei Karta fits the ideological bill, none of its adherents appear capable of stringing a coherent sentence together.

The Board of Deputies rightly criticised the event.

We came back from shul on Yom Kippur to find that the event was postponed. The reason given was “ … due to the unexpectedly large amount of interest shown. The only room available for the event is not up to capacity for such an event.” 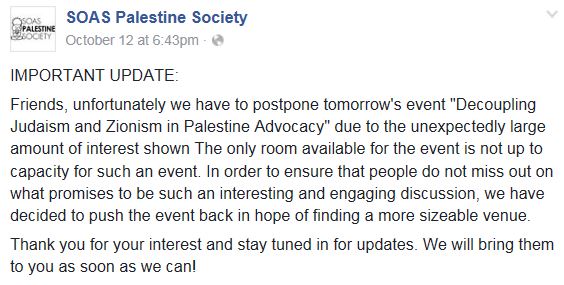 We suspected that was not the full story.

Sure enough on 18 October I received the following email from Chris Ince, the Secretary of SOAS:

Dear Mr Hoffman
Thank you for the two emails which you sent to Baroness Amos. She has asked  me to reply.
SOAS is committed to maintaining a neutral platform and ensuring that all members of our diverse community are free to express their opinions in a mutually respectful and collegial environment. This can only be conducted effectively in an atmosphere of open enquiry, mutual tolerance and intellectual freedom. As a result, a wide range of opinions and views are expressed at events held at SOAS but it does not mean that the school endorses or supports such views.
The two meetings you referenced were both organised by student societies and went through the students’ union’s risk assessment process.
In relation to the event last week, in light of discussion held with the SOAS Jewish Society and concerns expressed the meeting was cancelled. I understand that they may consider re-organising an event for later this term – and look again at issues of panel balance and the title of the session.

In relation to the first event, I should make clear this was of course not a formal part of any academic study or teaching at SOAS and no member of the school was required to attend the event.  I am not aware of any complaints having been raised by any staff or students at the school about the event.
Thank you again for your emails