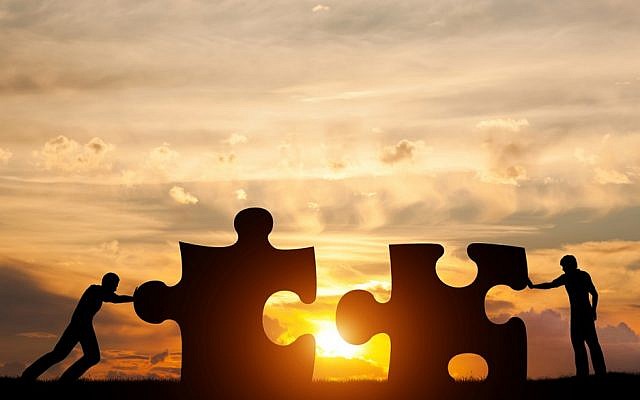 Many years ago, Elaine and I were being driven to the Catskills, a long-time favourite summer getaway for Jews in New York, and our driver told us the following story: One Friday afternoon, he was making his way to join his family in the Catskills for Shabbat when he saw a man wearing a yarmulke, bending over his car at the side of the road. One of the tires was flat, and he was about to change the wheel.

Our driver told us that he pulled over to the roadside, went over to the man, helped him change the wheel, and wished him “Good Shabbos.” The man thanked him, took his yarmulke off and put it in his pocket. Our driver must have given him a quizzical look, because the man turned and explained: “Oh, I’m not Jewish. It’s just that I know that if I’m wearing one of these” – he gestured to the yarmulke – “someone Jewish will stop and come to help me.”

I mention this story because of its obvious relevance to the command in today’s parsha: “Do not see your kinsman’s donkey or his ox fallen on the road and ignore it. Help him lift it up” (Deut. 22:4). On the face of it, this is one tiny detail in a parsha full of commands. But its real significance lies in telling us what a covenant society should look like. It is a place where people are good neighbours, and are willing to help even a stranger in distress. Its citizens care about the welfare of others. When they see someone in need of help, they don’t walk on by.

The sages debated the precise logic of the command. Some held that it is motivated by concern for the welfare of the animal involved, the ox or the donkey, and that accordingly tsa’ar ba’alei hayyim, prevention of suffering to animals, is a biblical command.[1] Others, notably the Rambam, held that it had to do with the welfare of the animal’s owner, who might be so distressed that he came to stay with the animal at a risk to his own safety[2] – the keyword here being “on the road.” The roadside in ancient times was a place of danger.

Equally the sages discussed the precise relationship between this command and the similar but different one in Exodus (23:5): “If you see your enemy’s donkey fallen under its load, do not pass by. Help him load it.” They said that, all other things being equal, if there is a choice between helping an enemy and helping a friend, helping an enemy takes precedence since it may “overcome the inclination”, that is, it may help end the animosity and turn an enemy into a friend.[3] This, the ethic of “help your enemy” is a principle that works, unlike the ethic of “love your enemy” which has never worked and has led to some truly tragic histories of hate.

In general, as the Rambam states, one should do for someone you find in distress what you would do for yourself in a similar situation. Better still, one should put aside all considerations of honour and go “beyond the limit of the law.” Even a prince, he says, should help the lowliest commoner, even if the circumstances do not accord with the dignity of his office or his personal standing.[4]

All of this is part of what sociologists nowadays call social capital: the wealth that has nothing to do with money and everything to do with the level of trust within a society – the knowledge that you are surrounded by people who have your welfare at heart, who will return your lost property (see the lines immediately prior to the fallen donkey: Deut. 22:1-3), who will raise the alarm if someone is breaking into your house or car, who will keep an eye on the safety of your children, and who generally contribute to a “good neighbourhood,” itself an essential component of a good society.

The man who has done more than anyone else to chart the fate of social capital in modern times is Harvard sociologist Robert Putnam. In a famous article, ‘Bowling Alone’ and subsequent book of the same title,[5] he drew attention to the sharp loss of social capital in modern times. It was symbolised by the fact that more people than ever were going ten-pin bowling, but fewer than ever were joining bowling teams: hence ‘bowling alone,’ which seemed to epitomise the individualism of contemporary society and its corollary: loneliness.

Ten years later, in an equally fascinating study, American Grace,[6] he argued that in fact social capital was alive and well in the United States, but in specific locations, namely religious communities: places of worship that still bring people together in shared belonging and mutual responsibility.

His extensive research, carried out throughout the United States between 2004 and 2006, showed that frequent church- or synagogue-goers are more likely to give money to charity, regardless of whether the charity is religious or secular. They are also more likely to do voluntary work for a charity, give money to a homeless person, give excess change back to a shop assistant, donate blood, help a neighbour with housework, spend time with someone who is feeling depressed, allow another driver to cut in front of them, offer a seat to a stranger, or help someone find a job. Religious Americans are measurably more likely than their secular counterparts to give of their time and money to others, not only within but also beyond their own communities.

Regular attendance at a house of worship turns out to be the best predictor of altruism and empathy: better than education, age, income, gender or race. Religion creates community, community creates altruism, and altruism turns us away from self and toward the common good. Putnam goes so far as to speculate that an atheist who went regularly to church (perhaps because of a spouse) would be more likely to volunteer in a soup kitchen than a believer who prays alone. There is something about the tenor of relationships within a religious community that makes it an ongoing tutorial in citizenship and good neighbourliness.

At the same time one has to make sure that ‘religiosity’ does not get in the way. One of the cruelest of all social science experiments was the “Good Samaritan” test organised, in the early 1970s, by two Princeton social psychologists, John Darley and Daniel Batson.[7] The well known parable tells the story of how a priest and a Levite failed to stop and help a traveler by the roadside who had been attacked and robbed, while a Samaritan did so. Wanting to get to the reality behind the story, the psychologists recruited students from Princeton Theological Seminary and told them they were to prepare a talk about being a minister. Half were given no more instructions than that. The other half were told to construct the talk around the Good Samaritan parable.

They were then told to go and deliver the talk in a nearby building where an audience was waiting. Some were told that they were late, others that if they left now they would be on time, and a third group that there was no need to hurry. Unbeknown to the students, the researchers had positioned, directly on the students’ route, an actor playing the part of a victim slumped in a doorway, moaning and coughing – replicating the situation in the Good Samaritan parable.

You can probably guess the rest: preparing a talk on the Good Samaritan had no influence whatever on whether the student actually stopped to help the victim. What made the difference was whether the student had been told he was late, or that there was no hurry. On several occasions, a student about to deliver a talk on the Good Samaritan, “literally stepped over the victim as he hurried on his way.”

The point is not that some fail to practice what they preach.[8] The researchers themselves simply concluded that the parable should not be taken to suggest that Samaritans are better human beings than priests or Levites, but rather, it all depends on time and conflicting duties. The rushed seminary students may well have wanted to stop and help, but were reluctant to keep a whole crowd waiting. They may have felt that their duty to the many overrode their duty to the one.

The Princeton experiment does, though, help us understand the precise phrasing of the command in our parsha: “Do not see … and ignore.” Essentially it is telling us to slow down when you see someone in need. Whatever the time pressure, don’t walk on by.

Think of a moment when you needed help and a friend or stranger came to your assistance. Can you remember such occasions? Of course. They linger in the mind forever, and whenever you think of them, you feel a warm glow, as if to say, the world is not such a bad place after all. That is the life-changing idea: Never be in too much of a rush to stop and come to the aid of someone in need of help. Rarely if ever will you better invest your time. It may take a moment but its effect may last a lifetime. Or as William Wordsworth put it: “The best portion of a good man’s life: his little, nameless, unremembered acts of kindness and of love.”[9]

Never be in too much of a rush to stop and come to the aid of someone in need of help.