On Sunday, October 16th, the day before Sukkot, the Tel Aviv streets were teeming with buses, cars, and pedestrians as the locals were making their last minute purchases before the holiday.  An 18-year-old woman who recently joined the IDF was amongst the passengers on a bus when the bus suddenly stopped short, sending her head careening into a pole on the aisle of the vehicle. The young soldier suffering from shock and head trauma became hysterical and frightened at the sight of her own blood. Alarmed passengers called for help and immediately dialed emergency services. 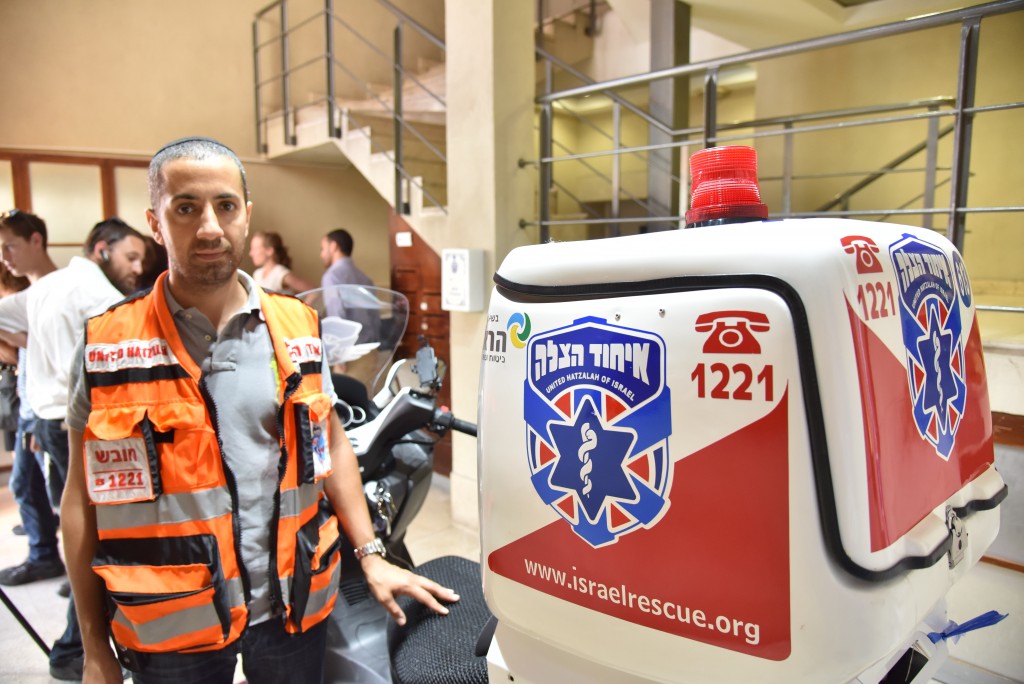 Yonatan Avraham pictured with his ambucycle in Jerusalem. (United Hatzalah)

The dispatch center of Israel’s national volunteer EMS organization United Hatzalah notified Yonatan Avraham, who was one of the closest volunteer EMTs to the area. Upon receiving the call Yonatan dropped everything, jumped on his ambucycle and raced to the scene. The traffic was heavy, and vehicles on the packed streets inched along bumper to bumper. Yonatan rapidly wove through the traffic, which had all but stalled, and arrived in under three minutes. He was the first medical responder on scene. The well-intentioned bus passengers quickly moved aside to let the professional take over and Yonatan swiftly bandaged the soldier’s wound and took her vital signs.

Overwhelmed by the pain and crowds of people around her, the soldier began hyperventilating and ultimately collapsed. Yonatan immediately ordered everyone off the bus and instructed the driver to keep the doors closed. At first, Yonatan suspected that she might be suffering from a concussion or worse, but the experienced medic soon realized that the young woman was actually having a panic attack. He gently spoke to the woman, guiding her with special breathing and relaxation techniques. After 15 minutes, the woman opened her eyes and began returning to herself. Ten minutes later, the ambulance had finally made its way through the traffic and Yonatan briefed the crew. Yonatan had gained the soldier’s trust to the point where she requested that he accompany her in the ambulance. The medic patiently explained that he has to be near his ambucycle in case he receives another emergency call, but he reassured the shaken woman that she would be in very good hands with the ambulance crew. The grateful soldier accepted Yonatan’s assurance and boarded the ambulance.

Yonatan works in the nearby Diamond Exchange as a surveyor and has been volunteering with United Hatzalah for over three years. He is originally from Italy and moved to Israel with his family when he was young. After his army service, he moved to New York for 18 years before coming home and settling in Tel Aviv.

When asked about how he felt after the rescue, Yonatan said, “There is a lot that goes into being an EMT. Before one has the experience of saving a life they need to go through a lengthy and difficult course, and a lot of calls, especially at the beginning, that may not be life-saving. But if one keeps focused on the fact that every single call you go out on may be the one that helps bring someone’s father, mother, brother, sister, son or daughter home in one piece, then it is all worth it. I am happy to have been able to help this soldier and I hope that she will continue to enjoy good health for a long time to come.”