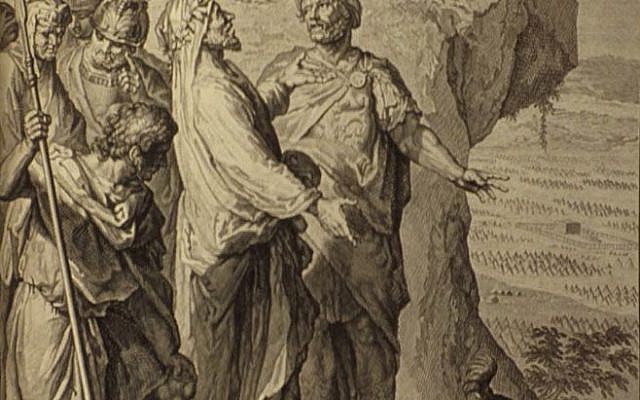 When you choose prophecy as your career, you don’t expect to spend eternity swimming in a sea of seething seed, but that’s exactly what happens to Balaam, the protagonist of this week’s Torah portion.

He then went and raised Balaam by incantations [from Hell]… He then asked: “What is your punishment?” He replied: “With boiling hot semen.” (Babylonian Talmud, Gittin 57a)

That gemara is disturbingly specific, but the Mishna twice mentions eternal torment for Balaam and his followers:

The disciples of Abraham, our father, enjoy this world, and inherit the world to come… But the disciples of Balaam, the wicked, inherit Gehenna and descend into the nethermost pit. (Avot 5:19)

Why does Balaam deserve to suffer such a sticky fate?

He [Balaam] said thus to him [Balak]. “The God of these hates lewdness… Come, and I will advise you. Erect for them tents enclosed by hangings, in which place harlots, old women without, young women within, to sell them linen garments…”

So it comes as some surprise that none other than Moses is a HUGE fan of Balaam’s work.

Moses wrote the five books of the Torah, then went back and wrote the passage of Balak and Balaam. (Jerusalem Talmud. Sota 5:6)

Let’s remember that Moses completes the original Torah on his dying day. That means he was about to finish his life’s work, but then said: Wait, I left out the poetry of Mr. Boiling in Hell — get me a caret!

Indeed, Moses’ own epitaph in the closing lines of the Torah is reinterpreted as a backhanded compliment by the Sifrei:

‘No prophet arose in Israel like Moses’ (Deut. 32:10) — No one among Israel, but among the nations of the world there was. Who? Balaam son of Beor.

In fact, the Talmud states that Balaam’s words were so well-regarded that they almost made the daily prayer cut:

Rabbi Samuel bar Nahman in the name of Rabbi Judah bar Zevuda: Really, we should read the passage of Balak and Balaam every day…

Rabbi Chuna says: Because it speaks of lying down and getting up.

Rabbi Yosi bei Rabbi Bon says: Because it speaks of the Exodus from Egypt and of kingship.

Rabbi Elazar says: Because it is referenced in the Torah, Prophets and Writings. (Jerusalem Talmud, Berakhot 1:5)

In practice, although we do not read the entirety of Balaam’s hundred-verse prophecy, we do quote one line whenever we enter a synagogue: “Mah tovu,” “How goodly are your tents, Jacob!”

This presents something of a conundrum: if Balaam spends eternity in Hell, should his words really be on our lips? If he’s so despicable, why is he so quotable?

The fact is that this is a question we struggle with regularly, especially since the #MeToo movement gained prominence over the past year. We would like to believe that bad people produce bad art (the Hitler analogy everyone loves), while those who produce good art must be good people — or at least, good enough people. But that just isn’t the case. Good art, great art, even divine art may be produced by execrable people. We must not destroy that which is beautiful because of the ugly actions of the people behind it; at the same time, we cannot excuse their awful actions because of the awesome literature, music or visual art they have produced. Let their work soar even if their actions drag them down.

So here’s to your poetry, Balaam. You’ll understand if I don’t shake your hand. I know where it’s been.