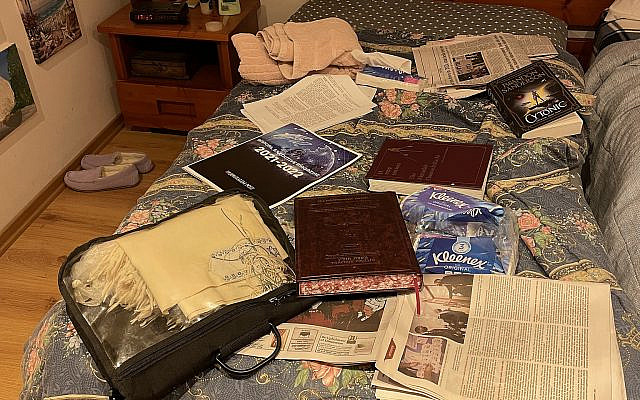 An un-slept in bed during these Corona times.

I am writing from the attic within our small castle of a home.  Everyday, once a day, a small door opens in the floor.  If I’m lucky, the tray of food that arrives will be enough to last me the day.  If not, I make do.  It’s been six days since I arrived here, banished from the more comfortable confines of the floors below.

It all started last week, when we decided to squeeze in a couple of guests before the arriving Omicron Tsunami.  What we didn’t know is that one of the guests, most likely, was the vanguard of the Tsunami itself.

Yet, in a stroke of good fortunate, only the men took ill (two of which reside here), leaving the women of the house unscathed.  It’s been these “women of the house” who have provided for the both of us, climbing the ladder to the attic with one hand, while holding the tray of food with the other.  Fresh towels have arrived when needed, and “reception” even opened earlier than scheduled Motzei Shabbat.  So, despite the remoteness of our accommodations, things are going okay.

Being locked away at the highest point of the house has a small silver lining, at least for those who live in the more comfortable floors below.  From what I’ve heard, the downstairs is fairly organized, the kitchen counters clear of what might described as detritus after a storm, and the word “Maetzben” no longer rings periodically through the hallways and stairways of the home.  Maetzben is a Hebrew word that describes a person who is both annoying and aggravating at the same time.  I’ve been called such.

Being cooped up with only a small window to the outside world — for my sake I am fortunate to have a pigeon perch on the grate of the window in the early morning — has given me time to think.  Since marrying some years ago, I often wondered why is it that a husband can annoy his wife more before 8 in the morning than a wife annoys her husband in an entire year? Why are men so comparatively Maetzben (annoying and aggravating at the same time) and so often?

After deep thought and analysis, I’ve decided that it’s genetically based. To prove this, I’d like to return first to the beginning, in particular, the genetic pea experiments of Gregor Johann Mendel.   Beginning in 1856, Mendel conducted experiments to determine how parental traits are passed from one generation to the next.  At the time, it was thought that parental traits (which we now know to be based on genetics) were blended together in the offspring.  That is, if one mixed a purple and white flowered pea, then one should get a pink flowered pea.  Instead, he found that over time mixing purple and white plants together produced purple plants 75% of the time, suggesting that some characteristics (genes) are dominant over others.

While this is very interesting and instructive, it still doesn’t explain why men suffer from “Maetzbenism” much more often than women.  I think for that, we have to look at sex linked genes, or genes that are linked specifically to the X chromosome.  What this means is that if a mother has one of two X chromosomes with a damaged gene for, let’s say red-green color blindness, then the sons will inherit that gene 50% of the time. Moreover, if this is a recessive trait,  the daughters will not be colorblind.

I am pretty sure that if I think long and hard, I could find a time when my wife was Maetzbenit, and other husbands probably think the same thing.  Hence, it’s likely that the Maetzben gene is at least present on the X chromosome, and not specific to men’s Y chromosome  (or really husbands) alone.  Hence, 50% of the boys will be Maetzbenim from birth and grow up to be Maetzbenim husbands.  To make matters worse, I am pretty sure that some men have a special version of the Maetzben gene on their Y chromosome, which is why some husbands (75%) are incredibly Maatzben — I being one of them.

I mention all this because despite the extra care and extra effort to climb that ladder, my wife seems happier than she’s been in quite some time. Out of site, out mind, they say.  The house is in order, quiet, and contented.   She’s also sleeping downstairs with the two dogs and two cats, while I’m sleeping up here — with only the ghost of the vaporizer to keep me company.

Hopefully, this will all pass within the coming week.  We’re all vaccinated and boostered, and we even took some medicines recommended by a local doctor. Of course, she might find that her bed isn’t quite as welcoming a place to return to, as  you might surmise from the picture above. Nevertheless, I look forward to her return!  Now that she knows she can climb that ladder with one hand, she’ll be sure to visit more often.

Take care and be careful of others (wear your mask) in these trying times.

About the Author
Dr. Barry Lynn has a PhD in Environmental and Atmospheric Sciences. He has an undergraduate degree in Biology. He is a researcher/lecturer at the Hebrew University of Jerusalem, and is the CTO of Weather It Is, LTD, a weather forecasting and consulting company.
Comments