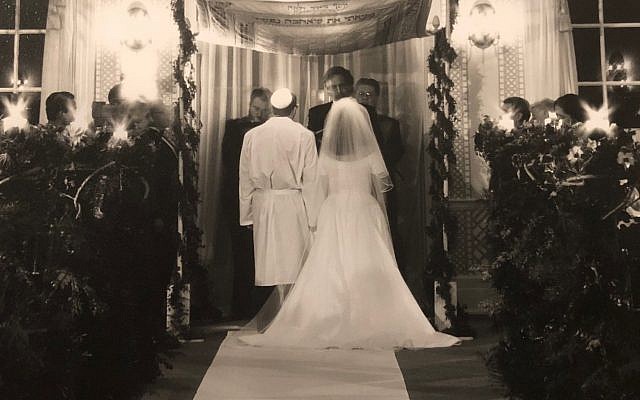 Recently I overheard my husband telling a story to a group of friends. He recounted specific details, painted a vivid picture. You could really feel his involvement. He was successfully building up to the punchline. There was only one problem.

“Honey,” I reminded him, “that’s my story. You weren’t even there.”

That’s how it is with couples married for as long as we have been, 21 years and counting. There are stories of each others’ we’ve heard so many times, using the same phrasing, the same cadence, that we tell them as if they were our own. As though we were there. They become our stories even if we never experienced them.

So maybe it was no accident that when we looked at a video of that mass of young white men mocking and taunting — my husband and I both had the same visceral response — Cossacks. The mass of jeering, mocking, vaguely threatening young men immediately brought Cossacks to mind. Now, despite what my teenaged offspring will tell you, I am not old enough to have any first hand experience running from men on horseback. But my cultural memory, of things that feel as though they happened directly to me, is shockingly strong.

I’ll admit that the images of Cossacks and Nazis may have confused themselves in my memory, as they sometimes have in popular culture (see the Constable in Fiddler on the Roof). But these young men did not so much evince WWII as they did the constant threat of a dominant culture that maybe, possibly, doesn’t really want you there. Watching them, if only on video, made me feel unwelcome, unwanted, other. As a woman and as a Jew.

How must those couple of Native American protestors have felt as they were surrounded by dozens of looming testosterone filled young white men? They, too must have a collective memory that sounds alarm bells that can only be heard inside their own heads, while the surrounding boys remain unphased, imagining, maybe, they are all only playacting.

Maybe those young men thought they were being dumb kids, completely unaware of any pain they might be causing. Maybe they think it’s ridiculous to imagine that anyone could be afraid of them. Maybe, if only a tiny bit, they feel the fear behind the eyes of the people they surround, stare down. Maybe that power is intoxicating. Like that moment when you’ve had a strong drink on an empty stomach, and your brain skips a beat.

Maybe they entirely lack that collective memory. Or maybe they have embedded memories of a place where they were in charge, a society that valued the White Man over all else. Of course, lots of them would have been immigrants, and all are Catholic, so the memory itself is a bit of a sham. But it’s easy in America to imagine that you were once a Prince, the envy of all others. If you are just months away from being a White Man. And seeing the possibility of this all slipping away – it can evince a fear, a terror – that the rest of us find difficult to comprehend.

How aware we are now that our perception of almost everything, from the color of a dress to a candlelight fast food White House dinner, is colored by our experience. And, it turns out, we don’t even need to have the experience ourselves. We merely need to attach ourselves to a powerful collective memory, and we are ready to put a frame around an event and hang it on our wall, color edited to enhance our own perspective. It’s good to know this, to be aware. But that can’t be the end of the story.

Once we understand our own way of looking at the world, we have to try to see events through someone else’s memory. That is the only path we have out of the painful retreat into our corners that characterizes nearly all of our political discourse today. It requires putting aside our own emotional experiences, temporarily, to make room for someone else’s.

Jewish tradition makes this exact demand on its adherents. Every Passover, Jews all over recite, “In every generation, we are obligated to see ourselves as if WE ourselves were brought out from Egypt.” Fake news, maybe. Or a recognition that the memories we share shape our interactions in the world of the here and now. My husband made room for my memories, slipped inside so effortlessly that they became his own. And in my own memory of the story, he’ll be there, too, acting it out all wrong. But that’s how our children will remember it, so maybe that was how it happened all along.