There’s a fine line between being brave and stupid. Looking down at the six kids sprawled on the floor of the Philadelphia Airport, I realized I had finally crossed it.

Gone were my buoyant visions of a merry mother goose making her way through international airports with her six goslings behind her. Gone my delusions of me, starring as the eminently capable woman.

While waiting to be booked into a commuter hotel — and rebooked for our third consecutive flight — I nearly panicked. Realizing that if everyone was too exhausted to walk to the street-side shuttle stop, we had no chance of getting to the roach hotel awaiting us.

I physically couldn’t just carry everyone there. I couldn’t do it alone. I had brought my kids into a situation that I couldn’t handle. 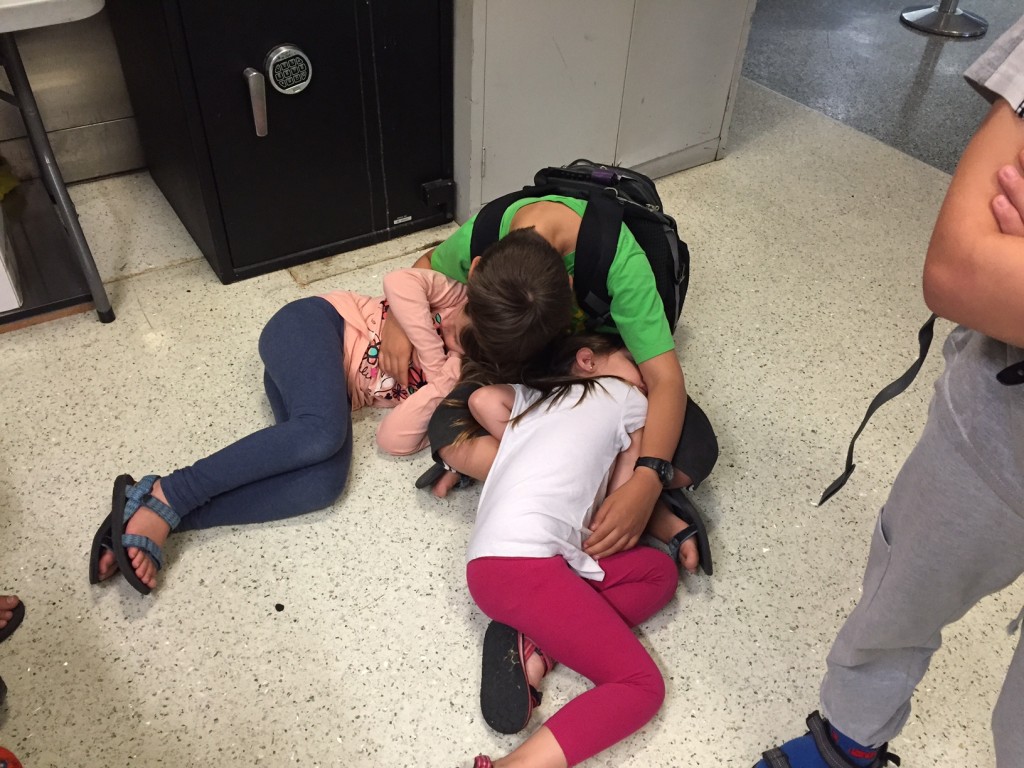 Three of the kids collapsed in a heap on the Philadelphia Airport floor. (Amanda Borschel-Dan)

But putting up a (false) brave front, I clapped and cheer-led my ragged bunch off the floor, on and off a hotel shuttle and up from the hotel lobby to our extremely humble abode. They collapsed; I ordered a beer and pineapple upside down cake. (It seemed a great metaphor.)

Earlier, at the awed comments of friends and neighbors at my foolish undertaking, I had scoffed, “What could possibly go wrong? It’s like childbirth. There’s a beginning and an end — and usually nobody dies.”

I had decided it would be very beneficial to my Israeli kids’ English to spend a month in Indianapolis with Grandpa (aka the trip’s financial partner). So, when hearing that the difference between a two-flight itinerary and three was $5,000, I did the “responsible” thing and girded my loins for warfare.

There was an hour-long line to check our bags at Ben Gurion Airport, but when we hit Paris, we were instantly ushered to a short queue reserved for elderly, disabled, and idiot mothers-of-six traveling alone.

As we waited and ate crappy French airport food (yes, even in France, it’s crappy), I thought smugly, “This is a breeze.” 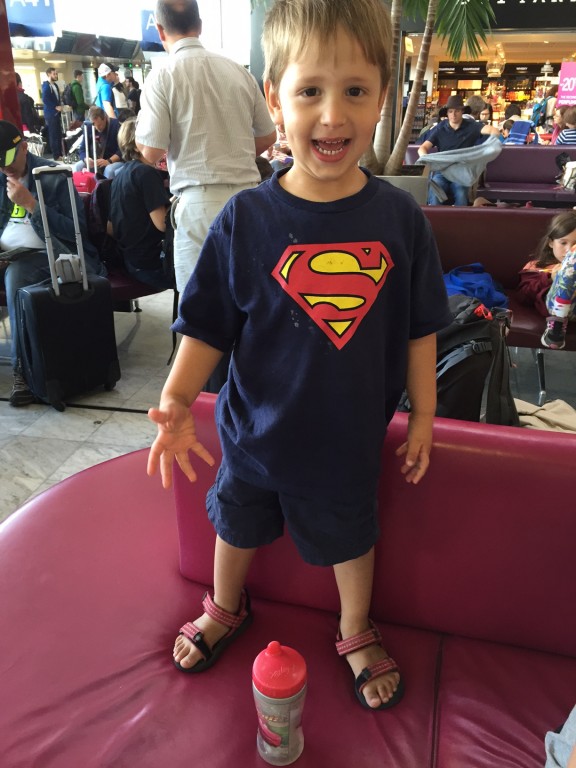 Traveling is a breeze in the Paris Airport. (Amanda Borschel-Dan)

And then there was the long flight to Philadelphia.

A close consultation with the Facebook hive mind had advised me to indulge the troops during this “rough” situation. Accordingly, I purchased all manner of snacks — that were roundly ignored in favor of nectar of the gods (Coca Cola) — and prepared each child a backpack with any number of coloring books, stickers and other diversions.

Glued to the in-flight entertainment, the kids whiled away the hours with the unimaginable joy of unlimited screen time. And, keeping the masses muted, the clever airline even ran the personal screens’ VOD during our hour-long delay on the runway in Paris.

They slept little and ate even less. (Here’s a free pro-tip: unless your kids like kugel that was evidently abandoned by the Jews fleeing Anatevka, don’t order the kosher meal.)

So by the time we reached Philadelphia, they were tired and undernourished, and their patience had worn thin.

I realized as we prepared to land that our delay in Paris would make it difficult to catch our final flight. In addition to passport control, once you touch down on US soil, you must retrieve your bags and recheck them. So I asked the flight attendant what I should do.

“I’d say you should run, not walk, to the passport control,” was her helpful advice.

When we reached the overflowing hall, with hundreds if not thousands of travelers snaking through its bureaucratic maze, I asked the first Transport Security Administration agent I saw for help in making our flight.

She said she’s not allowed to help.

As the minutes ticked by, the kids started collapsing on the floor. This was really not a problem; our line hadn’t moved an inch. 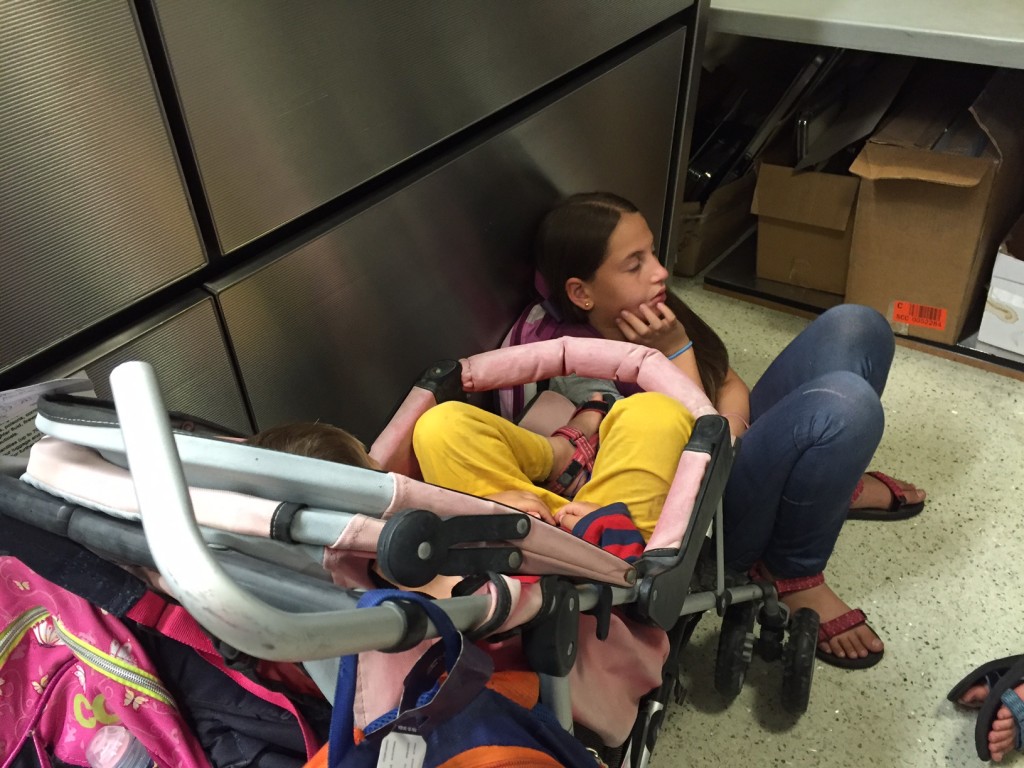 I called to another agent, and explaining our plane’s delay in Paris, asked for her help. She too said she’s not allowed. So I asked to see a supervisor.

With a uniformed swagger, the agent explained that the pickle we were in was all my fault; that we’ll inevitably miss our flight because I hadn’t built in enough time to get through Philadelphia’s passport control. I explained about the Paris delay, and told him when we’d purchased tickets half a year ahead there had been more lead time, but the flights were changed in the interim.

I asked him, as a human being, to help me, a mother traveling alone with six little kids. I basically begged.

He said, “If I help you, I’d have to help everybody else standing here. Sorry.” (Not sorry.)

After the agent’s decision, I swallowed my rage so as not to upset the kinder. But the more bitter pill was my utter disappointment in my former countrymen.

In Israel, where I’ve lived for the past 17 years, passersby may make a habit of remarking on the merits of your baby’s hat for that particular day’s weather. But it is also routine for strangers to help baby carriages up a flight of stairs or hold random children while parents pay bus fare.

There’s definitely a lot wrong in our sometimes chaotic, bombastic society, but — rules be damned — an admittedly naive mother traveling with six young kids would never have been given the cold shoulder, and definitely not after four requests for aid.

As “entitled” as it sounds, I realized that as a parent I’ve grown to count on that Israeli diamond-in-the-rough kindness.

Predictably, we missed our flight.

Predictably, although the airline clerk told me there’d be plenty of room for all of us in the hotel, we were given a room with two double beds for seven people. 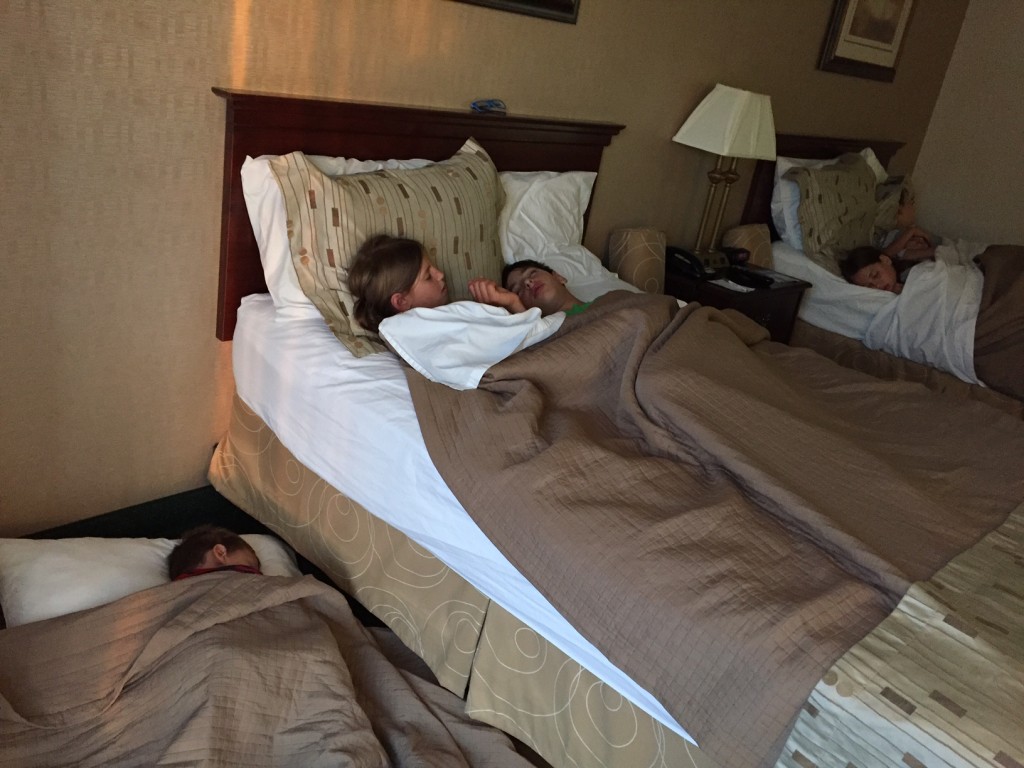 Snug as a bug in our commuter hotel in Philadelphia. (Amanda Borschel-Dan)

Predictably, when I asked for a bigger room, the hotel said we’d have to go back to the airline and get them to change the voucher. (The kids were already passed out in the room.)

Predictably, when I asked for a trundle bed, I was told it is a fire hazard. No, can’t help you.

So I made a bed of the one extra blanket they gave me and after downing my beer, slept on the floor with our youngest kid.

The next morning, the troops rallied and we dined on crappy airport pastries — on the house. After being intimately patted down in public by TSA for having a sippy cup with water in the baby’s backpack, we even made our flight to Indianapolis.

Predictably, of course, none of the three bags we’d checked in Tel Aviv made it there too.