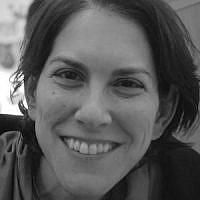 The Blogs
Ruth Ebenstein
Writer, Peace/Heath activist, public speaker, historian, mom/stepmom
Apply for a Blog
Please note that the posts on The Blogs are contributed by third parties. The opinions, facts and any media content in them are presented solely by the authors, and neither The Times of Israel nor its partners assume any responsibility for them. Please contact us in case of abuse. In case of abuse,
Report this post. 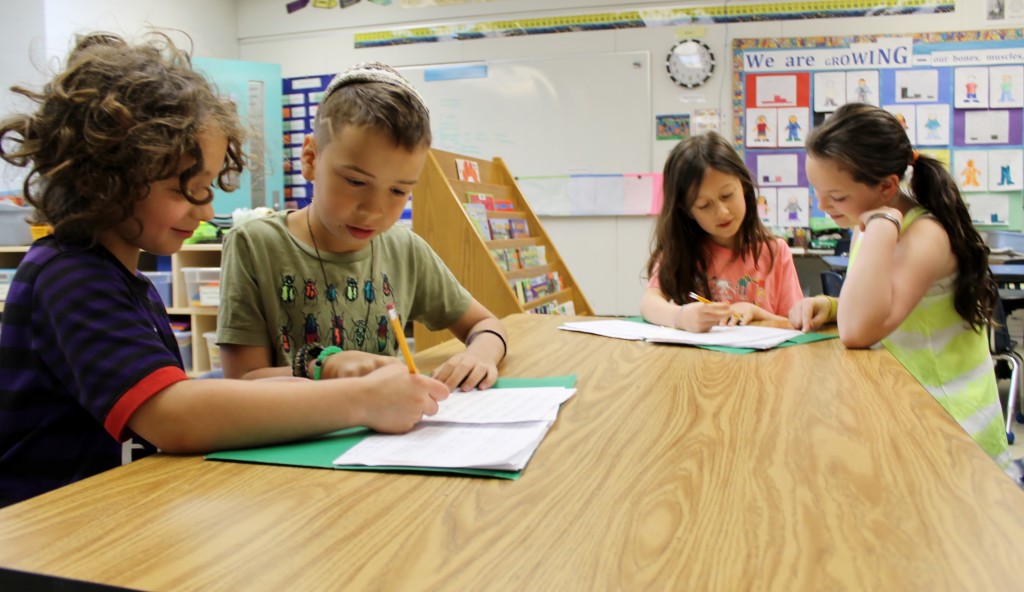 Gabe, a first grader, and Amalia, a second grader, are mentored by Jacob, a third grader, and Ayelet, a fourth grader, respectively, as the younger students work on their personal essays (Alison Reingold)

Often it takes an outside reader to help you understand the flaws in your writing.

This can be true even if you’re 7-years-old — and your esteemed editor is only 9-years-old.

Gabe Seinfeld Chopp, a first-grader at Hebrew Day School of Ann Arbor, learned the value of peer review while working on a class assignment. Janice Lieberman, his general studies teacher, had invited her students to take a plunge into the writing waters and pen a personal narrative.

Ms. Lieberman modeled for the budding authors, step by step, the different stages of the writing process. Her suggestions did not differ greatly from what older students and grownups are encouraged to do when they sit down to write. Choose a topic that you care about and excites you. Pick a seed of your story and show the details of that moment rather than go on and on about the whole thing. Engage the reader with a compelling lede, using dialogue or a question. And, finally, make sure that your story has a beginning, middle and end. The structure for teaching young authors to write personal narratives is informed in part by the work of Lucy Calkins and her colleagues at Columbia University’s Teachers College Reading and Writing Project.

Gabe pressed his No. 2 pencil to the lined paper. He had the perfect dramatic experience to share. Last fall, while playing football at home with his two older brothers in the spacious sun-lit room off their kitchen, he got pushed out of bounds and cut his head on the corner of a wooden chair, just above the nape of his neck. When Gabe’s fingers touched the open wound, they turned red with blood. More blood, and even more blood. The blood wouldn’t stop coming!

The 7-year-old began his narrative with the first words that came out of his mouth after the injury.

“AM I GOING TO DIE?” wrote the first grader, crafting letters. 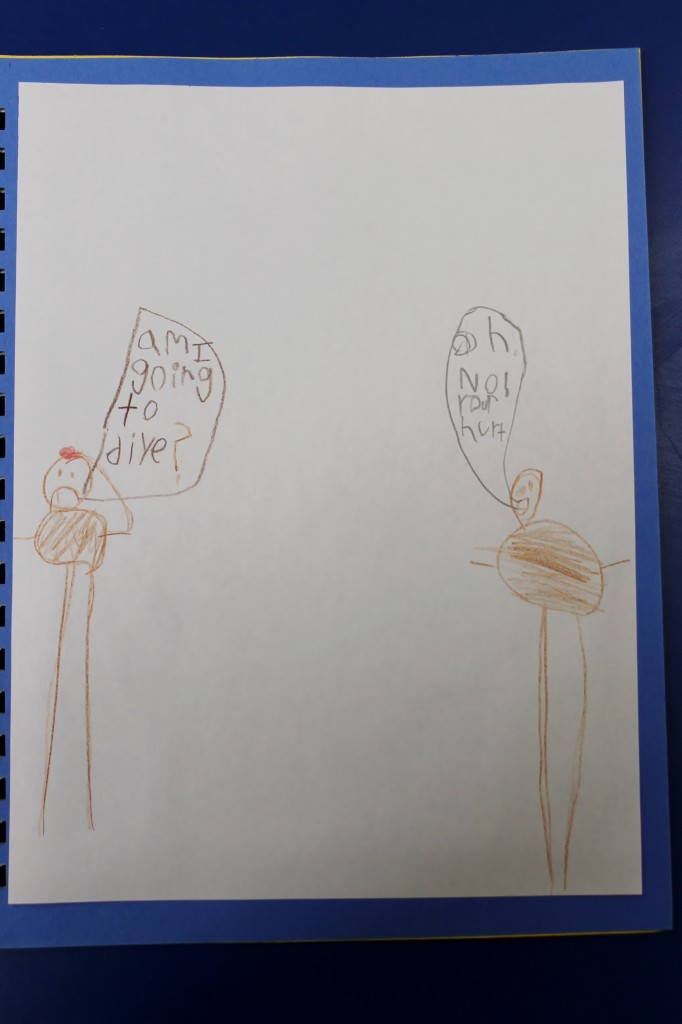 As far as he was concerned, the story began there: with a sea of red on his hands that trickled down to his jersey and shorts, and a palpable fear of dying. Like Shakespeare, he had grabbed the reader by starting off in medias res, in the middle of things. But when Ms. Lieberman asked him to share the details that preceded the injury, Gabe got stuck. Who cared what had happened before? Why did he need to tell that?

Try as she did, Ms. Lieberman could not get Gabe to understand the need to fill in the beginning of the story. Her students were scheduled to read their personal narratives at an upcoming lunch-and-learn with senior citizens from the neighborhood. Not many days remained before the curtain would go up.

Ms. Lieberman brainstormed possible solutions with the other teachers. What was the best way to teach this student this lesson? Together, they came up with a creative approach: invite the third and fourth graders to serve as literary critics to all of the young writers. Perhaps Gabe’s older peers, who had completed the same assignment a year or two earlier, could communicate the necessary feedback that a critical part of his story was missing from the page.

The next day, the third- and fourth-graders headed to the first grade classroom.

Jacob Liberzon, 9, plopped himself down at Gabe’s table. Gabe cleared his throat and read his story, stretching out the word “die”. When he was done, he looked up at Jacob.

Jacob remembered what he had been taught the year before about how to give feedback: compliments first, suggestions second.

“Wow, great, very dramatic,” said Jacob, with a big smile. “But how did you hurt your head?”

“I have to understand what happened before the blood,” explained Jacob.

Gabe grabbed a sheet of lined paper and started to pen the introduction.

“Me and my brothers were inside playing football. It was me and Jonah vs. Ilan. Me and Jonah had the ball. I ran forward to the side line. I didn’t see the chair next to me…”

Gabe copied over his prose with neat letters and illustrated the cover page. He went over his writer’s checklist, reviewing for capitalization, punctuation, grammar.  Now his hand-written, hand-illustrated story, “The Scariest Time in My Life,” was ready to be shared with the world. 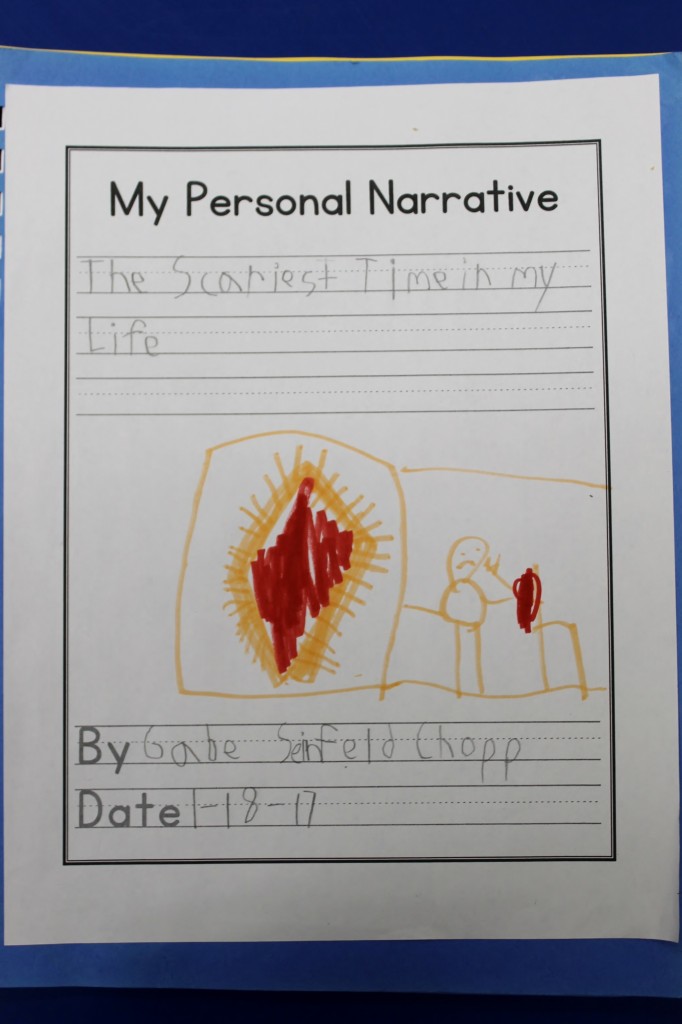 Like all budding authors, Gabe and his classmates learned some elementary lessons about how to draft a personal narrative. But there was another, unexpected takeaway thrown in: the importance of embracing constructive criticism from your peers.

Inspiring was Ms. Lieberman’s out-of-the-box approach to invite in the 9-year-olds to offer the feedback her student could not accept from her. And therein lays a model for us all. No matter how experienced you are, sometimes you cannot be the one to teach the lesson. You cannot be the one to foster the change. In those instances, look around with open eyes for the one who can.

About the Author
Ruth Ebenstein is an award-winning American-Israeli writer, historian, public speaker, and health/peace activist who loves to laugh a lot--and heartily. She is the author of the forthcoming book, Bosom Buddies: How Breast Cancer Fostered An Unexpected Friendship Across the Israeli-Palestinian Divide. She is also the author of "All of this country is called Jerusalem": a curricular guide about the contemporary rescue operations of the American Jewish Joint Distribution Committee and has written two teleplays for children, Follow that Goblin and Follow that Bunny. Her writing has appeared in the New York Times, Atlantic, Washington Post, Los Angeles Review of Books, Tablet, WomansDay.com, Good Housekeeping, Triquarterly, CNN.com, School Library Journal, USA Today, the Forward, Stars and Stripes, Education Week, Brain, Child, Fathom, and other publications. Follow her on Facebook and Twitter.
Comments