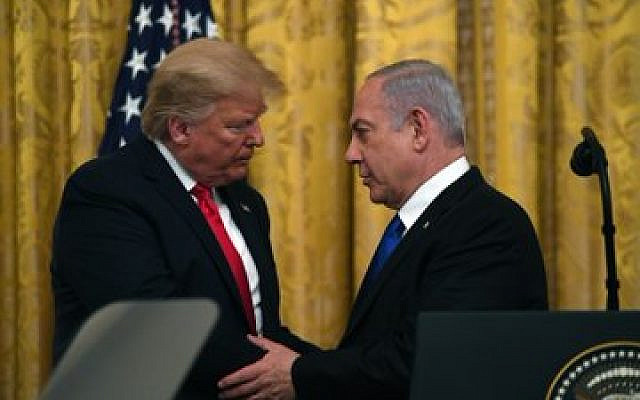 Donald Trump embraces Benjamin Netanyahu, during their meeting in Washington, where the so-called 'Deal of the Century' was unveiled. (@Netanyahu on Twitter via Jewish News)

Round robin letters to newspapers have a reputation for being on the wrong side of history. Often they are motivated by malice rather than judgement. They allow like-minded critics of policy to draw attention to their views which otherwise might not command a hearing.

The most notorious UK round robin letter of the late 20th century was the statement from 364 ‘leading’ economists in March 1981 declaring that Margaret Thatcher’s monetarist economic policies would kill the economy stone dead. In the following decades not only did Britain enjoy above trend growth but much the same economic approach was adopted by the Blair-Brown Labour Party to generally good effect.

Last year’s notorious round robin was a device used by a cadre of Labour supporting Jews to reassure the world there was not a racist bone in Jeremy Corbyn’s body. In February 2019 a long list of Labour, academic and literary worthies chose to ignore the rabid antisemitism aimed at Jewish MP’s – including Luciana Berger, Ruth Smeeth and Margaret Hodge – to declare Corbyn a “crucial ally” in the fight against “bigotry and reaction”.

On the eve of the 12 December election another group of worthies, including actor Miriam Margolyes, wrote to The Guardian suggesting that Boris Johnson has invoked “some of the oldest and most pernicious antisemitic stereotypes”. It was an artful piece of displacement.

By then the cat was out the bag. On the doorsteps, ordinary Britons recognised Corbyn’s Labour for what he had become. He was leading a party that had lost touch with the tolerance which made it a haven for Jewish voters and politicians.

I was reminded of all this by a recent round robin that was brought to my attention. One does not have to be a diplomat of distinction to recognise Donald Trump’s so-called deal of the century peace plan is deeply flawed. It bitterly divides opinion inside Israel and outside.

Indeed, the Israeli chief executives of the Abraham Initiatives (which I chair in the UK) forensically examined the plan, noting proposed land swaps ‘are an affront to the status and rights of the residents of the Arab citizens of Israel (of which there are two million) and that they not subjects whose citizenship can be passed “hand to hand”.

They spoke with the moral authority of a non-government organisation whose programmes – which include joint teaching for Israeli-Jewish and Israeli-Arab students – have been embraced by the Israeli government.

The round robin that has been circulated by Yachad in the UK and garnered global support, notes: “Trump’s one-sided deal does not adequately address Palestinian aspirations for independence in a sovereign state; it gives Israel the green light for the dangerous annexation of Palestinian territory.” Yachad calls for this “sham” deal to be rejected.

As is the case with all such letters (and in the course of my daily job I see them all the time), there is cowardice about the approach.

The originators don’t like some aspect of public policy, yet instead of using their own moral authority to point out flaws they seek comfort in gathering as many like-minded views as they can in hope of sustaining arguments.

Instead of the granular detail being addressed, as it is inside Israel by focused NGOs, the debate is reduced to broad bromides with which it is hard to disagree.

Most of what Trump does in foreign policy, whether directed at North Korea, Iran or even friends like the UK, is outside diplomatic normalcy.

So it is with the peace deal of the century which treats ordinary citizens of Israel, protected by the constitution of the founding fathers of the state, as pawns.

But the one-size-fits-all of multi-signature circulated letters is no more than braggadocio. It does nothing to heal differences between diaspora and Israeli Jews, combat the ogre of antisemitism or to build confidence in the cause of a just peace.