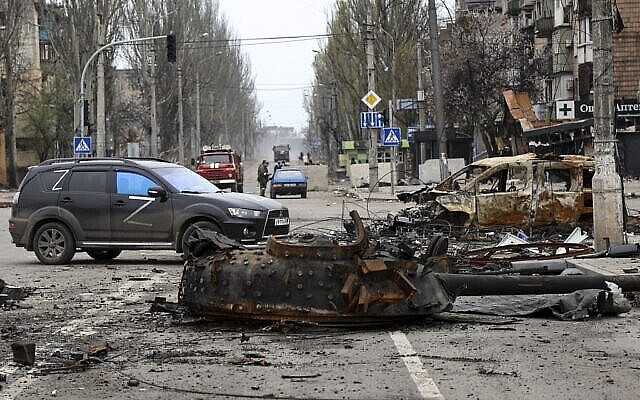 A part of a destroyed tank and a burned vehicle sit in an area controlled by Russian-backed separatist forces in Mariupol, Ukraine, Saturday, April 23, 2022. (AP Photo/Alexei Alexandrov)

Omerta Putin’s law and the need for international military intervention to prevent Moscow’s “invasion” and “aggression”.

The discovery of the bodies of more than 410 civilians and mass graves in the city of Bucha as well as the continuation of Russian war crimes in the port city of Mariupol indicate the need for Western intervention and military action. These human catastrophes are reminiscent of the attacks of Hitler, Stalin, and Slobodan Milosevic, and history is repeating itself. Bombings from above and snipers from the ground have made it very difficult for Mariupol citizens to travel and provide food and water, and Russian military operations in Ukraine have intensified. Meanwhile, Chechenya militias and Lebanese Hezbollah-affiliated militias “close to and under the control of the Tehran regime” and Syrian fighters “under the control of the Syrian regime” have announced their readiness to enter Ukraine and escalate the genocide. We must find a way and fight to restore peace, and Plato’s statement that “if you want peace, prepare for war” has a direct bearing on the subject. Two fundamental questions arise now in the bloody and tense situation in Ukraine: 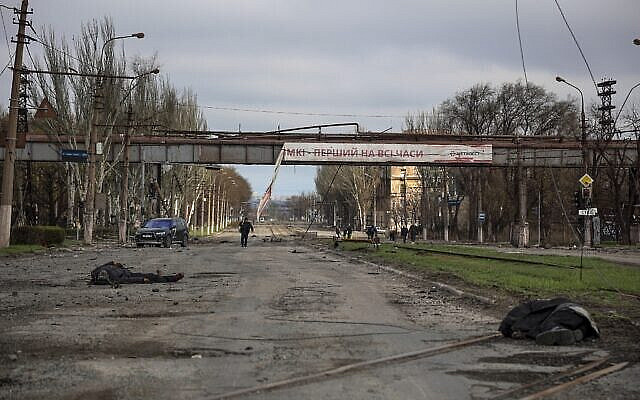 Bodies of civilians lie on the ground as local residents walk past a destroyed part of the Illich Iron & Steel Works Metallurgical Plant, the second largest metallurgical enterprise in Ukraine, in an area controlled by Russian-backed separatist forces in Mariupol, Ukraine, Saturday, April 16, 2022. Mariupol, a strategic port on the Sea of Azov, has been besieged by Russian troops and forces from self-proclaimed separatist areas in eastern Ukraine for more than six weeks. (AP Photo/Alexei Alexandrov)

How long should the world remain silent and respond only with economic sanctions to Mariupol’s bloody crimes?

How long should the world be silently watching the genocide and massacre of the Ukrainian people?

Putin’s crimes continue in Ukraine, especially in Mariupol, Donetsk, Luhansk, East and West, and the shelling has continued even more intensely than before, and this time the destruction of the logistics centre near “Lviv” is one of the most important events of the 57th day of the war. There have been more than 467 Russian missile strikes, and more than five million Ukrainians have fled the war so far. Russia’s savagery continues every day, and the published images of the killing of Ukrainian civilians by Russian forces are horrific. In general, the conditions in the region can be described as hell. In the past, Yugoslav Federal President Slobodan Milosevic plunged Serbia into conflict with the Balkans, and the international community was able to stop his crimes. In the Ukraine crisis, this shameful silence of the world against Russia’s crimes continues, but the greater tragedy is the international community’s silence on a crime that targets humanity and human values. Meanwhile, the support of Belarus, Iran, Syria, and China for Russia’s criminal activities-with political cover-has not been ineffective. In a nutshell, it refers to the Principle of Responsibility to Protect.Accordingly, government is not a privilege, but a “responsibility” that leaders must have towards individuals. The Responsibility to Protect Principle is referred to by the acronym R2P, which stands for (Responsibility to Protect).Accordingly, government is not a privilege, but a “responsibility” that leaders must have towards individuals. The international community has a duty to support genocide, war crimes, and crimes against humanity. Accordingly, a government should not engage in war and killing and justify this oppression with “sovereignty” and principles such as “non-interference” and “equality of states.” In this case, the international community has the right to intervene in that country, and given the global warnings and the failure to correct Russia’s behavior, it is now necessary for the world to intervene militarily against Russia. An intervention that must change the situation from its perspective and end war and killing. Following the tragic events in Rwanda in 1994, the issue was placed on the agenda of UN representatives, and during this genocide, NATO, on behalf of the UN Security Council, launched air strikes on these crimes, finally stopping them. Experience has shown that a global embargo on Russia and the sending of weapons by the “international community” to Ukraine is not a sensible solution, and this kind of support will only increase the repetition of genocide by other countries in the region.

It requires “eliminating neglect” and “strengthening awakening” in global societies. An example needs to be mentioned in this regard:

“If we imagine the world community today as a big moving ship and assume that every country and community is a passenger on this ship, we can no longer be neutral and indifferent to the events in Russia and Ukraine.” Because Russia’s invasion of Ukraine and the killing of people and the destruction of its infrastructure is like drilling part of a ship, and eventually water enters it and all the passengers drown together. Some media outlets, governments, groups, and others who deliberately or unknowingly claim that Russia’s invasion of Ukraine belongs to “two countries” seem to have made a big mistake. We should all have the “sense” of ship passengers, and it must be repeated in our minds that “one of the passengers is digging up (the seat of her settlement) on the ship.” Evidence suggests that Russia’s invasion of Ukraine is only the beginning of the story, and that Moscow has a targeted plan to occupy other countries. With Moscow’s full influence in southern Ukraine, a possible attack on “Transnistria” (part of Moldova bordering Ukraine) is predicted, and moving west is one of Moscow’s next plans. The consequences of this war, including the siege of other neighbouring countries, as well as the economic crisis and irregular migration, are only part of the consequences of continuing Russian aggression. If no fundamental action is taken, the world’s political future will face a fundamental crisis.

Poor performance by the global community:

A): The United Nations’ Performance:

UN Secretary-General Antonio Guterres, who has an “emotional rather than logical” view of the Ukraine crisis, said he was “deeply shocked” by the images of mass graves discovered in Bucha. He called for an “independent” investigation into the killings of civilians in the city. He called for a “temporary ceasefire” in Ukraine on Easter, and in practice, since the beginning of the war, Guterres has made no “serious” attempt to stop Russian aggression. Conversely, it has intensified the Russian genocide, and it should be noted that the “negative performance” of the international community in response to Putin’s criminal actions has remained unanswered to this day, and this indifference is a clear example of the promotion of crime.

From the International Committee of the Red Cross (ICRC):

Peter Meyer, chairman of the International Committee of the Red Cross, travels to Moscow to address «humanitarian» issues in the Ukraine war and leaves two days later.

“We are talking to all sides with one goal, and that is to save lives and reduce suffering during armed conflict,” he said.

The United States has told other leaders it supports sending “heavy artillery”, “air defence systems” and “anti-tank missiles” to Ukraine. According to a Pentagon official, US military aid has reached the following countries: the United Kingdom, Germany, France, Canada, Poland, Romania, NATO Secretary General, President of the Council of Europe, and President of the European Union, Western Allies of Ukraine. They have been sent to Ukraine in seven flights, and according to British Prime Minister Boris Johnson, the war in Ukraine will turn into an artillery war.

Russia’s atrocities against Ukraine have proved to the world that the Russian genocide involved in the spread of this war and anyone directly or indirectly involved must be punished by an international tribunal. Today, the world is watching the Ukrainian genocide, and the countries that seem to sympathise with Ukraine have said, in just one sentence:

The Russian president and his supporters will feel the “consequences” of their actions, and the West must impose more sanctions on the country. Undoubtedly, one of the main missions of the United Nations and the International Criminal Court is to investigate war crimes and genocide, and in current practice, in addition to not doing its main job in Ukraine, it has made Putin even more rude and indifferent to the situation in Ukraine, and all in all, Russia has reached a point where it has drawn its sword against the West. But it is not clear why and for what logical reasons the international community has remained silent about Russia’s crimes. The international community, including the United States, Europe, and the United Kingdom, “must” take military action to stop Russia’s war crimes and genocide. For example, if we imagine all the countries of the world inside a big ship and Russia sits in a part of that ship and wants to pierce “where it is sitting,” it will definitely face protests from other countries. And even if Russia believes in piercing the ship “meaning” only “the part where it sits,” if the whole society inside the ship does not take logical action, the whole ship will sink due to the stupidity of one person. And so it is with Russia, and the consequences of this war will soon be felt in democratic societies. In general, with the bloody crimes of Russia, the formation of such a large population of Ukrainian refugees (in less than two months) has been unprecedented in Europe since World War II.Without a doubt, important new developments are taking place in the world, and Ukraine and its environs will face serious challenges, because Russia’s main goal is not just the complete liberation of Donetsk and the Luhansk Republic, and Putin is thinking of capturing neighbouring countries in his evil thoughts. In the current situation, the number of attacks, crimes, and genocides of Russians in different parts of Ukraine, including the port city of Mariupol, is increasing day by day, and in general, the situation in Ukraine can be described as “hell”. In general, the geometry of Vladimir Putin’s spirits is in accordance with the Law of Silence (Omerta), and according to this law, the victim has no right to complain or protest even if he is killed. However, given Putin’s inhumane behaviour and Russia’s annexation of the Middle East in order to “massacre” the Ukrainian people, the international community must intervene unitedly and resort to coercive military action to stop Russian crimes in Ukraine. Finally, in order to heal some of the pain of the victims’ families, it is essential that Putin be tried and punished in the International Criminal Court and in front of the world media.

To date, the world has only “watched” Russia’s crimes and genocide against Ukrainian civilians with “negligence”, so the “border of silence” must be broken and to ward off “Russia’s continuing evils” and “restore peace,” intervention and “global military aggression” are the last “logical” solutions.

About the Author
Hamidreza Zarifinia is an Iranian writer, researcher and journalist in London.
Comments