There’s a new second guard booth at the entrance to the long winding road leading to my three older kids’ school.

With the pouring rain (and since I was taking their three younger siblings in the car anyway), I drove them so they wouldn’t have to stand at their overcrowded bus stop. And so, although I’d attended a recent emergency meeting about school security, today I saw the booth and the preparations for a gate for the first time.

I asked the kids if the additional guard made them feel safer. About two months ago, there had been two terrorist attacks on the nearby main road. It’s about 150 meters from their school — as the vulture flies.

Then, my Israeli kids said they had seen the aftermath from their play yard. They had said that too nonchalantly, I think.

This morning, one son scoffed at the additional guard. “We’re in the middle of nowhere! How many terrorists would come by car, when they can just climb up by foot, anyway?!”

Another said, “Adding a guard and a gate will just make it slower to get into school in the morning.”

And my daughter didn’t find the topic of interest at all. She was busy looking for her sports shoes instead.

“Well, on that note,” I said with fake cheer, “have a great day at school!”

And then we all saw the most deliciously radiant rainbow. A batman call of optimism beaming from the surrounding desert hills. 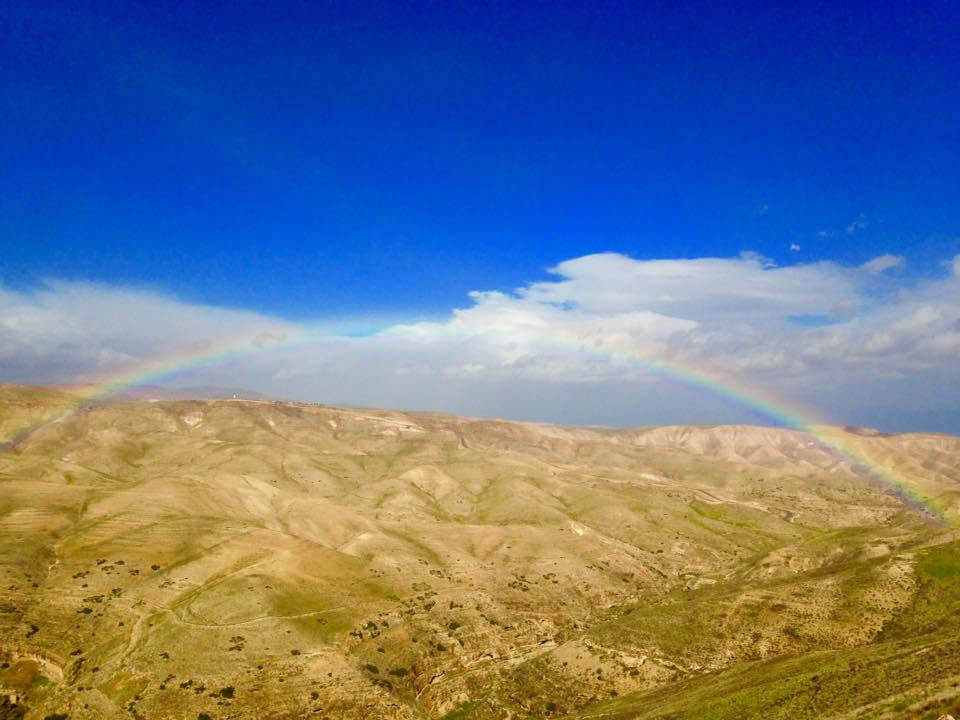 Later, in our driveway, I’m still turning the conversation over in my mind. I sit in our ginormous people mover and listen to the rain pound on the steel roof.

And as I look at the magically electric bars of color above my head, a la Tevye, I find myself thinking.

“God, you promised Noah that this rainbow would be a sign that you wouldn’t send another flood to wipe out all life on Earth. But here we are again, violent and wasteful, destroying ourselves and our world. And without even the promise of a better way, somewhere over the rainbow.”

It’s easy to be melancholy in the rain.

My six children, aged 3-12, are like a pack of wolf cubs — sometimes frolicking; sometimes in a squirming pile, nipping at each other. Clearly, I cannot even bring peace to my own homogeneous household.

Today my son turns 12 and of late I am constantly flashing forward to his impending bar mitzvah. But today I am also haunted by a 13-year-old girl who lived not far from our home, and who this weekend left her family in anger, and chose to end her life in a suicide terror attack.

There are several comics with aliens making the social media rounds. The aliens are asked if they’ve come to destroy the Earth. The punchline? “Why should we, when you’re doing such a good job of it yourselves.”

Today is Tu Bishvat, the new year of the trees, one of the four dates in the annual Jewish cycle the rabbis deemed ripe for renewal. A time for planting and planning for the future.

Sighing, I look up again, seeing the half-hidden remainder of my rainbow: an ephemeral vision of coexistent color that really only occasionally comes to vibrant fruition.

Again, channeling my inner milkman, I give God a little smile. And a shake of my fist.