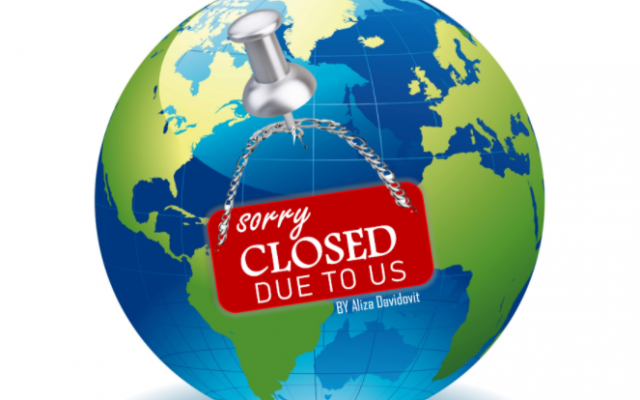 G-d created this world and if you think the Chinese are solely responsible for shutting it down, you are wrong and dangerously mistaken. The Angel of Death is diffusing with avidity. Mankind has been driven into its homes just as the Israelites were driven into their own “isolation” on the very first Passover so that death would pass them over. Goat or sheep’s blood marked their doorposts. Today we have Mezuzot instead with its three highlighted letters “shin,” “dalet,” and “yud”— an acronym which stands for Shomer D’latot Yisrael, “Guardian of the Doors of Israel.” It is as it has always been, the words of G-d, the Torah, will protect us–if only we would let them.

But man can’t live by words alone. Say the word “food” a hundred times, but you will still be hungry. G-d has driven us into our homes, via His puppets, i.e., governors, mayors, presidents and their like, not only to rediscover our family relationships and reevaluate our priorities, but also to rediscover our relationship with Him. His words demand actions: body and soul partners in time — a very limited time. In many places in the world because mankind has been pushed into hiding, animals are breaching the boundaries of their natural habitats and roaming city streets, goats running rampant in Wales, wild pigs in Paris, coyotes in San Francisco and monkeys in Thailand. When G-d looks through His celestial window, can he tell the difference between us? How different from animals have we become? We worship our animalistic needs and desires while starving our souls. We emptied the supermarket shelves, but the shelf that holds our bibles and prayer books, they are still full, untouched.

One of the Hebrew words for plague is “Dever” דבר. The very same Hebrew letters, Dalet, beit, resh  also spell the word “Davar” which means word  or utterance. Hence the Ten Commandments in Hebrew are Aseret Hadibrot, really meaning the Ten Utterances. G-d’s words sustain us. “And [Moses] took the Book of the Covenant and read it within the hearing of the people, and they said, “All that the Lord spoke we will DO and we will hear.” (Exodus 24:7) But when we break that vow and violate G-d’s word, davar, we get dever, the plague instead. Perhaps having to wear masks is symbolic of what we’ve become, hypocrites with our true faces hidden. Moses had to wear a mask because his face beamed with the light of G-d; our faces however, bespeak a godless pallor.

Last year at this very time, with unwitting prescience, I wrote that destiny is as brittle as a matzah and that it can pivot in a second. And woe, how it has. Breathtakingly so. With the upcoming holidays, keep in mind that Passover is not just about cutting bread from the menu, it is also a divinely sanctified time for us to take an introspective look at ourselves, to clean up our spiritual crumbs. It is a time to remember that G-d alone has saved us and can save us, not Dr. Fauci, or Trump, or medical masks or ventilators made by General Electric. Yes, GE may “bring good things to life,” but G-d alone decides who lives.

Friends, it’s time to flatten our egos like yeast-free bread and start serving the one and only Who is puffing the air into our well-being. The difference between this night and all other nights is that G-d is no longer asking, He is telling. Oh beloved humanity, be expeditious and afraid, lend Him your ears and obey the word of G-d, or the ark will surely sail without you.