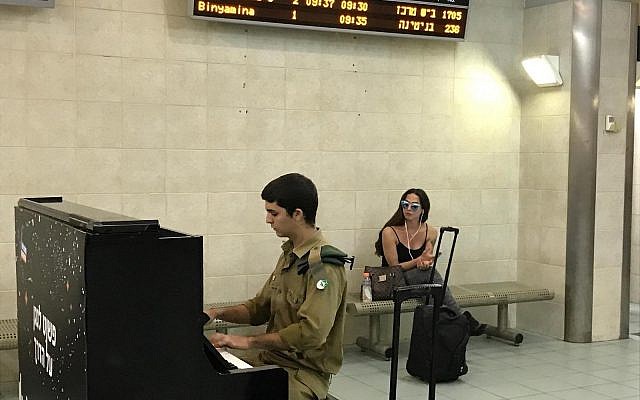 There are subtle variations to the predictable drama, but the dynamics usually are the same: The sun is setting and a glance at my watch tells me that it’s time to go home. I start packing my backpack, but a desperate student knocks on the door and pleads for two minutes to solve an academic problem that requires the department chairman. Of course, the consultation invariably morphs into seven. And then there is the mad dash to my bicycle, a Tour de France streak across Ramat Aviv to the Tel Aviv University Train Station. Then there’s a sprint down the stairs and through security up to the platform…. only to watch the Modi’in train pull away from the station. It’s only a half-hour wait for the next one, but I’m already late.

Dejected, I shuffle down the stairs to the main atrium of the station. Taking a seat on one of the hard, metal benches I try to navigate between acute frustration, self-pity and annoyance at my 30-second miscalculation. But amidst the haze of aggravation, slowly, almost imperceptibly, the sweet sounds of a piano start to penetrate the negative force field. Looking up, I see a young soldier pounding out a Billy Joel number, an Arik Einstein standard, or perhaps it’s a Chopin Nocturne. This morning I saw a particularly gifted Ethiopian Israeli pianist go straight from a gentle rendition of Beethoven’s ethereal Moonlight Sonata to a jocular Scott Joplin rag.

Under these circumstances, even though I have every intention of cultivating my discontent until it becomes a genuinely rotten mood, I simply can’t. Involuntarily, my spirits are revived. The music is simply irresistible. Forty-five minutes later, arriving at Modi’in’s central train station, I am invariably welcomed home by another young musician’s performance.

All across Israel’s train stations you will find pianos placed in the passengers’ concourse. A one-time gimmick initiated by Israel Railway has become a permanent, creative infrastructure. The signs on the back of the standup pianos display the slogan: “To simply play along the way.” And that’s exactly how it works. Anyone waiting for a train, or who has just arrived and is in no hurry to get to their final destination – can just sit down and tickle the ivory. First come, first play. It’s astonishing how many people do just that.

Israel, it turns out, is chock-filled with piano players. Since the initiative began a few years ago, I have listened to literally hundreds of them. Some display astonishing technique and should be playing in Carnegie Hall or Tel Aviv’s Bronfman Auditorium. Most are merely very talented. One evening the choir from the nearby Kibbutz College Choir came down to the Tel Aviv U. station and gave an entire show with their conductor at the keyboard. A lot of us stayed for the duration of the concert – and didn’t mind waiting for the next train at all. Sometimes the young pianists (and they are almost always under 30 and often under 20) take requests for popular numbers from the crowd. Sometimes they put out a hat for contributions. Mostly, they just play for fun. 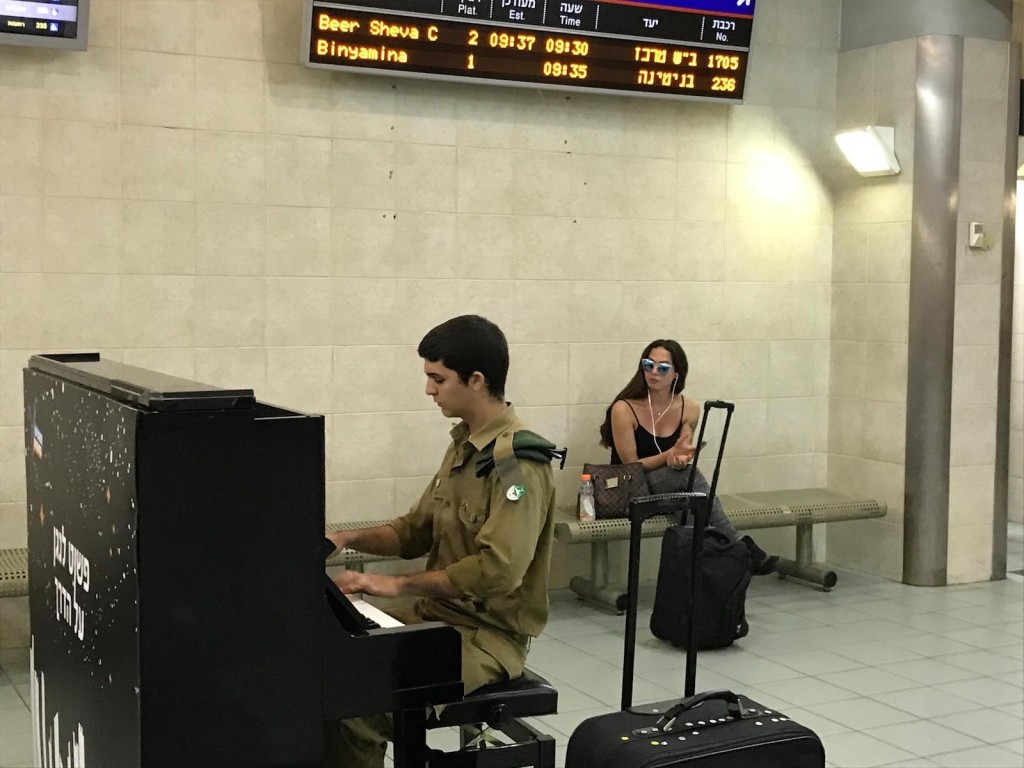 The piano players are a motley crew: they include men and women; payot and kippot alongside mohawks and dreadlocks. There are the well-dressed and the vagabonds. The Tel Aviv University station that I encounter daily is in close proximity to several military intelligence bases. So, a high percentage of the performers are soldiers who not only give the best years of their lives and their own considerable intelligence to keep us safe, they also find time, at the start or end of their work day, to entertain the civilians.

Yes, the railway pianists are as diverse as the colorful mosaic called modern Israel itself. But almost all are testimony to the many Jewish mothers (and fathers) who somehow found the money for music lessons and managed to induce their kids to get a little culture. Today, that investment provides a live soundtrack for a nation that increasingly commutes to work by train.

The result is that an otherwise sterile, impersonal and harried train station is transformed into an intimate, living room recital, enjoyed by the hundred thousand Israelis who stream through local stations each day. It is uplifting. It gives us hope about future generations. And even if we just missed the train, it reminds us that life in the Third Jewish Commonwealth is really very good – and can be filled with harmony.

I often worry about the unremitting forces which push cities — indeed entire societies — towards the pathology of alienation. Often in the United States one gets the feeling that the country is drifting into a land where 325 million strangers live. Israelis also face the toxic forces of polarization, greed, gratuitous animosity (“sinat chinam”), intolerance and tribalism. It’s not at all clear that the forces of social solidarity and shared purpose that coalesced to produce the miracle called the State of Israel will win. I’m not sure where we might find the antidote for the mean-spirited distrust and cultural divisions which inform so much of the newspaper headlines and political discourse. But the exuberant amateur musicians who sit at the keyboards, and the sweet sounds arising from pianos in train stations everywhere, are a pretty good place to start.

About the Author
Professor Alon Tal is a member of Israel's Knesset representing the Blue and White Party, a veteran environmental activist, and an academic based at Tel Aviv University's Department of Public Policy.
Comments
Advertisement