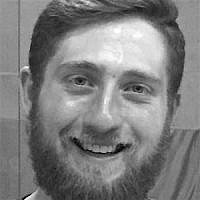 The Blogs
Ben Atwood
Apply for a Blog
Please note that the posts on The Blogs are contributed by third parties. The opinions, facts and any media content in them are presented solely by the authors, and neither The Times of Israel nor its partners assume any responsibility for them. Please contact us in case of abuse. In case of abuse,
Report this post. 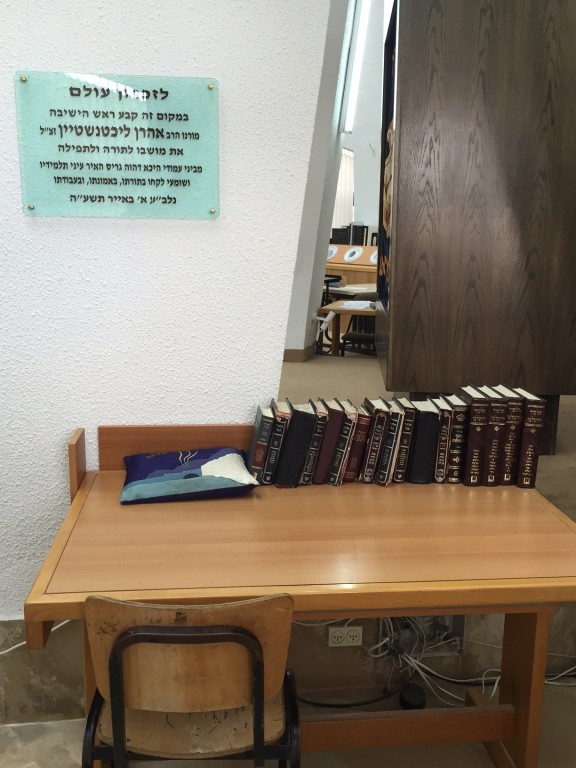 “In this place, Rosh Yeshiva, our teacher, Rabbi Aharon Lichtenstein ZT”L, established his dwelling place for Torah and prayer. Between these pillars he toiled to open the eyes of his students and his audiences with his Torah, his faith, and his service.” Photo taken by author

It was no simple feat, but Michael Eisenberg finally mustered the courage to ask Rabbi Aharon Lichtenstein, zeikher tzaddik le’vrakhah (ZT”L), may the righteous person’s memory be a blessing, a question on halakhah, Jewish law. After months of failed attempts to do so, Mr. Eisenberg slowly yet forcefully brought his legs one in front of the other and approached Rabbi Lichtenstein’s seat at the front of the Yeshivat Har Etzion beit midrash, study hall, as a nervous servant approaches his majestic king. The servant, sweating, trembling, waits to be recognized by the monarch; once Mr. Eisenberg was acknowledged with a kind smile, he asked what the Rosh Yeshiva thought about copying music from one cassette to another. Rabbi Lichtenstein replied “you bought it, you made a kinyan [legal transaction], so you reserve the right to do with it what you like.” He paused. “But you will not win a medal for “kedoshim tihiyu,” “and you shall be sanctified” [Leviticus 19: 2].

Soon after Rabbi Lichtenstein’s passing one year ago, Rabbi Amnon Bazak of Har Etzion related a speech Rabbi Lichtenstein delivered many years prior on the Torah portion of Aharei Mot, read a week ago in Israel and this week in the Diaspora. One can only imagine the typical booming voice Rabbi Lichtenstein employed to ask students what the connection is between the death of Aharon the High Priest’s sons, Nadav and Avihu, mentioned at the beginning of Aharei Mot and the ritual service described directly afterwards. To answer, he presented two inappropriate aspects of Nadav and Avihu’s fatal “eish zarah,” “alien fire” (Leviticus 10: 1) described a few chapters earlier in the Torah portion of Shemini that underscore the sons’ ignorance of their responsibilities as priests of the nation.

First, Nadav and Avihu offered a private sacrifice that focused solely on their respective individual relationships with God. Although the service described at the beginning of Aharei Mot includes a personal sacrifice offered by the High Priest, the crux of the offerings lies in begging God to forgive the sins of the entire nation of Israel. By juxtaposing the deaths of Aharon’s sons with the atonement service for the nation, the Torah highlights the improperly selfish focus of Nadav and Avihu’s offering. Second, the sons were too enwrapped in the spirituality of the moment to perform a proper service in accordance with the Torah’s strict guidelines. Offering sacrifice is a powerful spiritual activity that often can distract from proper halakhic observance. As a result, the priestly procedure is lengthy and complex to assure proper balance of law and religious high, something Nadav and Avihu disregarded.

The responsibility of kehunah, priesthood, requires one to be both an agent of the people and an emissary of God. By focusing on themselves and foregoing proper technical procedure, Nadav and Avihu fail to meet both their communal and Divine duties. In extension, being any leader in a religious society requires unwavering dedication to the people and the law, a quality I quickly learned was the entire essence of my former Rosh Yeshiva, Head of School, Rabbi Aharon Lichtenstein.

What I knew about Rabbi Lichtenstein before his passing was already mind blowing. I had heard much about his beautifully woven and eloquently delivered classes; his commitment to Religious Zionism and Torah u’Madda, the synthesis of Torah and secular subjects, as ideal; his courtesy and humility amongst others and himself. I had seen him most days from my seat in the Yeshiva beit midrash, marveling at his thirst for sitting amongst his students, despite his physical weakness. I treasured the words he said to me when I first introduced myself to him at lunch a mere twenty months ago “work hard and learn well.” But people often do not fully comprehend the value of a gift until it is no longer; despite my tremendous appreciation of my Rosh Yeshiva, it was not until his exit from our world that I began to truly recognize the messenger of God that was Rabbi Lichtenstein.

Mishnah Avot 1: 2 quotes Simon the Righteous as teaching “the world stands on three things: Torah; avodah, work; and gemilut hasadim, acts of kindness. Rabbi Lichtenstein, a prominent heir to the Brisk dynasty of Talmud scholars, spread his carefully structured, Harvard English Literature PhD-integrated hiddushei Torah to communities all around the world. In fact, Yeshiva University Rosh Yeshiva Rabbi Hershel Schachter noted in his eulogy that Rabbi Lichtenstein, during his studies in Yeshiva University, would give review sessions of the great Rabbi Joseph B. Soloveitchik ZT”L’s lectures that would be longer and more detailed than the original lessons: “back then I would think Rabbi Lichtenstein could have been giving the lecture and Rabbi Soloveitchik the review sessions!” Part of Rabbi Lichtenstein’s dominance in Torah study logically stemmed from his uncompromising work ethic, with the exceptional ability to teach his brilliant ideas with laser-sharp focus on minimal sleep without once taking an afternoon nap.

Nevertheless, it is Rabbi Lichtenstein’s gemilut hasadim that is most astonishing to me. The verse Rabbi Lichtenstein invoked in his answer to Michael Eisenberg is interpreted by the medieval Torah scholar Nahmanides as the prohibition against being a “naval be’reshut haTorah,” “a degenerate within the limits of the Torah.” The verse, which begins this week’s Torah portion of Kedoshim, forbids one from acting in a manner that is halakhically acceptable yet morally reprehensible. The response to Michael Eisenberg’s inquiry was, as Mr. Eisenberg described in his eulogy, “a halakhic answer with an ethical qualifier”—the Rosh Yeshiva never failed to preach that simply because one can do something does not mean he should.

At every moment of his life, Rabbi Lichtenstein was weighing competing ethics and values to live a life of utmost morality; mediocrity was alien to him. Thus, the stories of Rabbi Lichtenstein’s acts of kindness are infinite in both number and quality. Many recount tales of classes in which Rabbi Lichtenstein would treat the most foolish of questions with utmost sincerity and respect. Some report of nights in his home where he would sport a genuine smile while giving charity to those he believed were making lifestyle mistakes. Others detail the extra time he would spend in Yeshiva before Rosh haShanah, even in his weaker years, traveling all over the campus to thank every Rabbi, kitchen staffer, maintenance worker for their tireless labor. Concurrently, all note his clear devotion to God and promotion of strict halakhic observance. As messengers of God, Nadav and Avihu fail to maintain the immense love of the Divine Law and Humankind a priest must exemplify and Rabbi Lichtenstein championed. No one, especially God, was considered a stranger by Rabbi Lichtenstein; while Aharon the High Priest’s sons offered an alien fire, Rabbi Aharon’s fire was warm and intimate, continuously burning in the Holy of Holies while spreading to the innumerable communities he affected.

Rabbi Beni Lehman, in a eulogy presented at Har Etzion, described Rabbi Lichtenstein as a juggler, constantly yet carefully considering all of his values in every task he undertook. However, Rabbi Moshe Taragin, speaking after Rabbi Lehman, disagreed: a juggler carries individual balls, while Rabbi Lichtenstein balanced all his principles on one ball, viewing them as inseparable and interrelated.  Since Rabbi Lichtenstein’s passing, the tremors of the departure of such a sophisticatedly balanced mind have been felt throughout the Modern Orthodox world. My former high school principal, Dr. Kalman Stein, personally lamented to me the absence of the exceptionally nuanced voice he and other community leaders often depended on for guidance. As Har Etzion’s Rabbi Doniel Schreiber eulogized, Rabbi Lichtenstein was “spiritual aristocracy” in every regard, and searching for even a somewhat similar figure will prove trying.

Although I first understood “work hard and learn well” as a suggestion for Yeshiva success, I now perceive the sole five words my Rosh Yeshiva shared with me as a challenge to become even a fragment of the assiduous laborer, intellectual powerhouse, and ethical beacon that is Rabbi Lichtenstein. As Sunday night marks the first yahrzeit, anniversary, of his passing, we recognize that ashreinu she’zakhinu, we are fortunate to have merited living in a world of Torah, avodah, and gemilut hasadim greatly supported by the Israelite nation’s Rosh Yeshiva, Rabbi Aharon Lichtenstein ZT”L.

“Light is planted for the righteous, and gladness for the upright at heart” (Psalms 97: 11)

About the Author
Ben Atwood is currently a second-year student at Yeshivat Har Etzion in Alon Shvut, Gush Etzion. He lives in Teaneck, New Jersey, graduated from Frisch High School, and will be attending Yeshiva University next year.
Related Topics
Related Posts
Comments