One day a year, on Yom Kippur, roads throughout Israel remain empty.  A strange silence envelopes the Jewish State as engine roars and horn blasts of cars and trucks cease. Then bicycles shoot out from all directions and the silence is broken by the playful chatter of children pedaling their ofnai’im (the Hebrew word for bicycle).

In the evening, the Yom Kippur service in synagogues throughout the land begins when the ark is opened and two people take two Torah scrolls and stand on both sides of the cantor as he chants three times, “With the acknowledgement of Hamakom and the acknowledgement of the congregation.”  (Hamakom literality means “The Place.” Wikipedia translates it as “The One Who is Everywhere” and the ArtScroll Machzor translates it as “the Omnipresent.”)

In the morning service, the congregation recites aloud, “The whole world is filed with His glory. The Ofanim and the holy Chayot, with great noise, raise themselves towards the Seraphim.  Facing them give praise saying: Blessed is the glory of Hashem from His Place.” 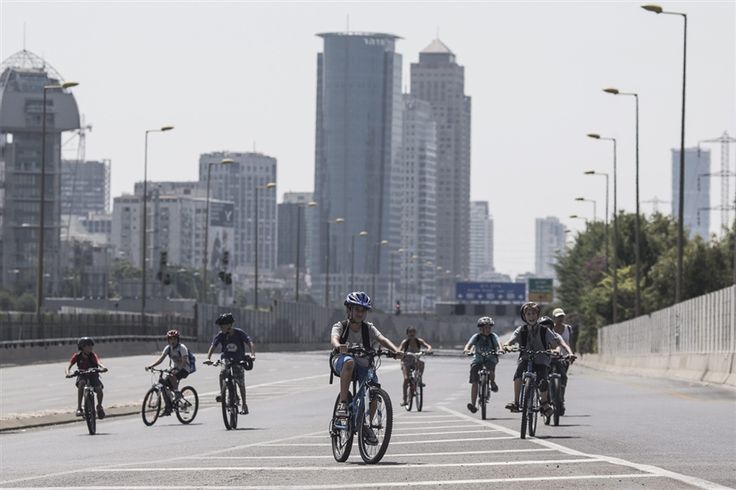 We can find spiritual significance in that ofnai’im (bicycles) and ofanim (wheel angels) are spelled with the same Hebrew letters.  Bicycles symbolize motion.  They are only stable when they are moving.  When they stop, they fall down.  The story of the Jewish people begins with movement when Abraham follows the divine message to walk away from one’s familiar past of static idols in order to envision a dynamic future (Genesis 12:1).  The Talmud teaches us to read Halacha (Jewish law) as halicha (walking).

In the biblical book of Ezekei, we learn that Ofanim are one of three classes of angels.  They symbolize motion in the World of Action, motivating all of our actions in the everyday world of space and time.  Chayot inhabit the World of Emotions and seraphim inhabit the World of Mind.  Above these three worlds is the World of Intention in which no angels can be found.

Rabbi Adin Steinsaltz in his book The Thirteen Petalled Rose describes angels as messengers bringing divine plenty down from the worlds of Mind and Emotion into the World of Action.  The role of angels is implicit in their Hebrew name malach, which means “messenger.”  It is said that an angel can carry out only one mission.  Every angel is one-dimensional, lacking the many-sidedness of human beings.  No two angels are alike. Each one of the Seraphim is a distinct unit of mind, each of the Chayot is a distinct unit of an emotion.  Ophanim is a distinct action.

ANGELS IN THE CYBERSPHERE CLOUD

Seraphim and Chayot are like invisible bits and bytes in the cybersphere cloud that transmit their messages to Ophanim that render them visible on your computer monitor, tablet or smartphone.  Like data packets transporting information through cyberspace, the task of angels is to maintain communications between worlds of Mind, Emotions, and Action. Angels can be considered discrete data packets in the immaterial Worlds of Mind and Emotions realized in the material World of Action.

An angel in the World of Mind is a one-of-a-kind cognitive data packet of a specific thought, word, idea, or concept. An angel in the World of Emotions is an affective data packet of a particular feeling or emotion, a specific inclination or impulse toward love, fear, pity, and so on.  Ophanim are wheel angels bicycling through the World of Action, animating the realm of space and time, coloring every single facet of your daily life.  Since every angel is a separate entity, no angels exist in the World of Intention.  It is a world close enough to the divine source to be whole before being broken into separate entities by the creation of the universe.

THE ‘PLACE’ WHERE ALL THE ACTION TAKES PLACE

In synagogue, the congregation call out God’s name as Hamakom before the cantor ushers in Yom Kippur by singing the powerful melody of Kol Nidrei.  The Midrash asks, “Why do we call God by the name Hamakom?  Because God is the place of the world” (Bereshit Raba).  These words penned almost two millennia ago as a commentary on Genesis teaches us that Hamakom, the Omnipresent, is everyplace. Hamakom is the spacial name for the endless God.

The biblical narrative describes Jacob coming upon a nameless place on his journey from his parent’s home to a distant place that he has never seen.  It was at that place where he stopped to sleep that he had the dream of a ladder linking heaven and earth.  “And Jacob left Beersheba and headed toward Haran.  He came upon the PLACE and spent the night there because the sun had set; and he took from the stones of the PLACE which he arranged around his head and lay down in that PLACE (Genesis 28:10)

It was in this rocky no-man’s-land that Jacob encountered Hamakom.  If God is in everyplace, how could Jacob have stumbled upon Hamakom in one particular place?  Jabob came upon a new insight rather than finding a new geographical place.  He came to realize that in the finite makom, the place where he happened to stop for the night is where he encountered the infinite Hamakom.  He began to see that God was present wherever he stopped on his life’s journey.  Jacob stumbled upon the understanding that wherever he found himself was the right place at the right time.  When he awoke from his sleep, he said “Surely God is present in this PLACE and I did not know it…. How awesome is this PLACE (Genesis 28:17-18).  Jacob’s insight teaches us how awe-inspiring it is to discover God’s presence everyplace we happen to find ourselves.

THE SYNAGOGUE DOES NOT OCCUPY A CENTRAL PLACE IN JUDAISM

Perhaps bicycles take to the quiet streets and highways on Yom Kippur to teach us what Jacob discovered — spirituality can be found in every place.  Whatever their labels on the spectrum from secular to haredi, Jews throughout the Land of Israel religiously observe the Sabbath of Sabbaths by refraining from driving their cars.

The Lubavitcher Rebbe, Menachem M. Schneerson, the great contemporary Hasidic rabbi, emphasizes that it is not enough to rest content with your own spiritual ascent, the elevation of your soul in closeness to God. You must also strive to draw spirituality down into the world and into every part of your involvement with it, your work and your social life, until not only do they not distract you from your pursuit of God, but they become a full part of it.

Rabbi Joseph B. Soloveitchik, one of the foremost thinkers of the 20th century, teaches that you should not direct your glance upward but downward, not aspire to a heavenly transcendence nor seek to soar upon the wings of some abstract, mysterious spirituality, but to fix your gaze upon concrete reality.  He writes in his seminal book Halakhic Man, “The marketplace, the street, the factory, the house, the meeting place, the banquet hall, all constitute the backdrop for the religious life.  The synagogue does not occupy a central place in Judaism.”

This blog post is based upon my book Photograph God: Creating a Spiritual Blog of Your Life available from amazon.com.