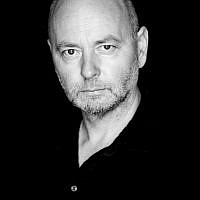 The Blogs
Stephen Smith
Apply for a Blog
Please note that the posts on The Blogs are contributed by third parties. The opinions, facts and any media content in them are presented solely by the authors, and neither The Times of Israel nor its partners assume any responsibility for them. Please contact us in case of abuse. In case of abuse,
Report this post. 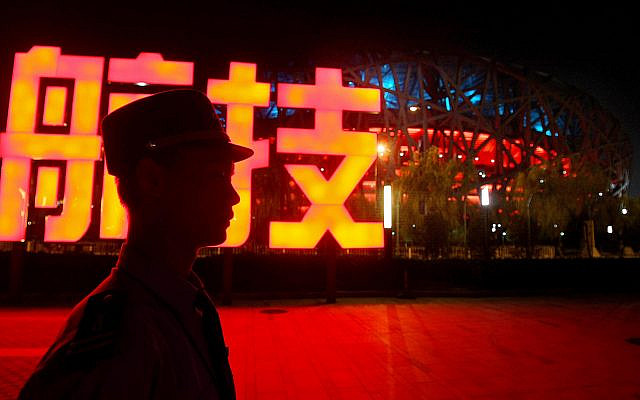 A member of the Chinese Security staff in front of the National Stadium. It is not just fears of the encroaching pandemic - and the very real prospect of athletes seeing their Olympic dreams wither in an isolation facility - that has led many to question whether the Beijing Olympics should be taking place at all. Issue date: Friday January 28, 2022.

The proximity of Holocaust Memorial Day to the Beijing Winter Olympics raises anew the thorny question about sports and politics. China is hosting 89 nations amidst calls for it to address its own human rights record.  China’s treatment of its Muslim Uyghur minority has been described by the United Nations as “deeply disturbing” and as genocide by an independent group of scholars.

The 1936 Summer Games in Berlin presented a similar dilemma to global sports. Calls had been made to boycott the event in America by Jeremiah Mahoney, president of the Amateur Athletic Union. This was fiercely contested by Avery Brundage of the American Olympic Committee who had traveled to Germany to inspect sports facilities and had been duped into believing that Jewish athletes were being fairly treated.   He considered what was happening in Germany as a “Jewish-Nazi altercation”.

The USC Shoah Foundation archive tells a different story. Jewish athletes report that they were not allowed to participate with their German peers, and so they signed up to their own sporting organisations. John Adler and Erwin Fisher report joining Jewish sports club Bar Kochba where Jewish children were taught (much needed) physical self-defense.  Those who wanted to pursue their sports seriously eventually fled Germany.  Margaret Lambert was removed from her German athletics club and traveled to Britain, where she competed, and won the British Championship in high jump. She was subsequently recalled to Germany to train for the Olympics. She did not dare decline fearing for her Jewish family in Germany She was then dropped from the German team just before the Olympics despite having tied the national high jump record a month before. Ewa Brewer’s stepsister was another Jewish athlete, who it was reported could no longer compete because of an injured  ankle.  Ewa recalls her being fit for competition, sobbing on her bed, at home.

Germany felt the external pressure nevertheless, and for a few months cleaned up its act. Jews could ride the tram, sit on park benches, and yes, attend the Olympics.  Surviving victims of the Nazi era describe in their testimonies a summer of reprieve. Diane Jacobson reports that “everything was wonderful in Berlin”; Henry Lowenstein observed that the “heat was turned down”; Agnes Adachi was thrilled to be in the Olympic stadium watching Jesse Owens compete; Moshe Ram whose father made furniture for high ranking Nazis, sat in the press box near Hitler watching the entire stadium Sieg Heil; Ernst Weiss tells how he kept his arm firmly down; Eric Frisch was a proud to be a Jewish athlete running with the Olympic torch.

Boycott movements emerged in several countries including Britain, Sweden, the Netherlands and France. An attempt to create alternate games in Spain fell apart thanks to the onset of the Spanish civil war. Back in America US President Franklin D. Roosevelt allowed the independence of the American Olympic Committee to prevail in its decision to compete in Berlin, much to the disdain of the American Ambassadors to both Germany and Austria.

Holocaust Memorial Day gives a moment to remember the loss of innocent lives, but not only so. It is also a time to reflect on what might have been done to save them. For just a few weeks in 1936 Germany felt enough international pressure to provide some reprieve to the Jews. It was a moment of normality that they had not experienced in over three years.  There was optimism the the Games could provide a turning point.  As Jesse Owens sprinted to victory, it felt like there was hope for all oppressed peoples.

Then it was over, and the eyes of the world were once again averted.

For the last three decades I have been constantly reminded by Olympian Sir Ben Helfgott of the importance of looking after my health and enjoying sport. But what he and other Olympians who survived the Holocaust embody is the power to prevail. There is no greater event on earth for bringing people together in the spirit of true human endeavor seen at the Olympics.  But neither should sports become an excuse to turn a blind eye to murder.  The 1936 games were a charade, because everyone knew what the Nazis stood for and did little to prevent it.

In the debate about sports and politics I am a firmly a “no” vote when it comes to boycotts. That is because I believe we need to shine a a light on oppression every day, and use the tools of international law to prevent it.  For those who really care about human rights abuses, pressure should start long before, and continue long after, a two week sporting event once every four years.  Imagine a world that had said “No” to the Nazis, and meant it, every day.

About the Author
Stephen D. Smith is CEO of StoryFile and Executive Director Emeritus of USC Shoah Foundation
Comments