As a teenager, I loved classic science-fiction television shows like Star Trek and The Twilight Zone.

I remember countless late nights glued to the TV, listening to Rod Serling open the show: “It is a dimension as vast as space and as timeless as infinity. It is the middle ground between light and shadow, between science and superstition, and it lies between the pit of man’s fears and the summit of his knowledge. This is the dimension of imagination. It is an area which we call the Twilight Zone.”

Its episodes were clever and engaging. Imagine a world, where the beauty standards were reversed and what we think of as ugly and disfigured is the normative standard and someone whom we think of as gorgeous is deemed horrific.

Or the classic episode the Odyssey of Flight 33 where a plane somehow gets sucked into a time vortex and instead of being in the year 1961 when they took off, it is 1940 and there is no runway long enough to land on, no way to get back to the future…. (You could see where later 80s movie writers, like Robert Zemeckis and Bob Gale, found their inspiration!) 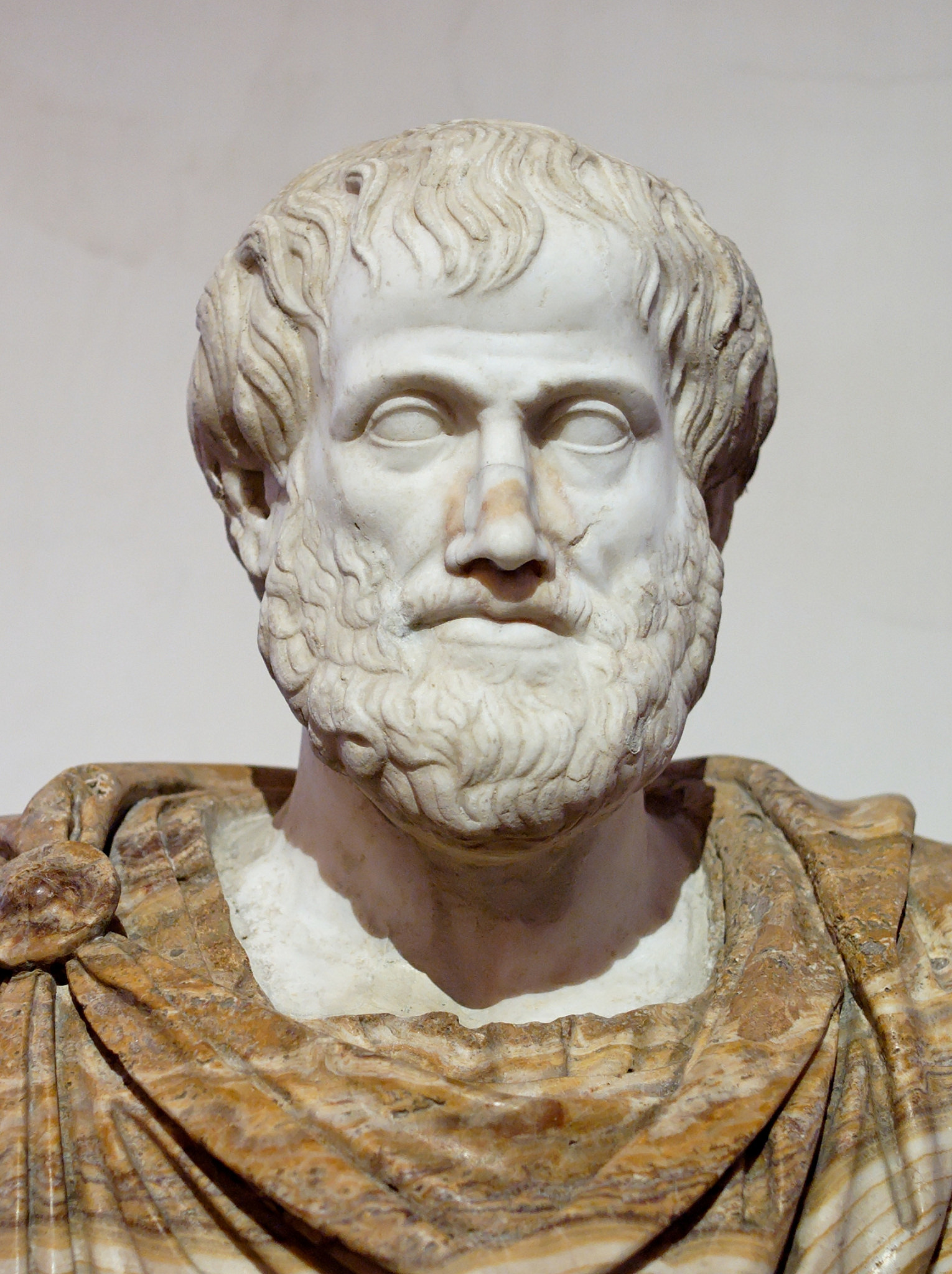 Bust of Aristotle on display at Museo Nazionale Romano di Palazzo Altemps from the Ludovisi Collection. Marble, Roman copy after a Greek bronze original by Lysippos (390-300 BCE) from 330 BCE; the alabaster mantle is a modern addition. (Public Domain via Wikimedia Commons – Photographer Jastrow, 2006)

This was a show that pushed the limits of our imagination and like all great literature allowed for the “willing suspension of disbelief,” as Aristotle first explained it.

This allows for the audience watching a play (or reading a novel or seeing a show or a movie) to enter into a space where we can leave reality behind, and enjoy the stimulation of the art. Thus, time travel and other things are not real (at least, as far as we know now,) but they can be experienced in this art form. We leave behind the normative reality for a short period of time to feel catharsis, an emotional release.

Well, for the last nine months, we have been living in a Twilight Zone. There have been many days when I have woken up thinking that this was some kind of dream or nightmare, that this was not real, that this has not been happening.

I have been confused about time. I did not used to forget what day it is, but now, I need to ask more and more: is it Wednesday? Tuesday? Thursday? All the long days of Zooms just blend into each other. It’s as if the absence of personal contact and actually being physically close to people has dulled some of my senses and disconnected me from time. This entire experience feels like a week and like a decade all at once. It is surreal.

As most of us just celebrated Thanksgiving alone or with the people in our own homes, or just those in our bubbles and maybe with a few on Zoom, we realize we are not inhabiting normal space and time. It is the Twilight Zone. But it is not fake. It is not a hoax. It is real. Sadly, very real.

Every day this past week, about 3,000 people died from this pandemic in the U.S. alone – that’s a 9/11 every single day. The winter will be filled with more of the same. Somehow, there are people who think it is not real, even a few who are in the hospital with Covid-19 think it is fake. What can we say?

On Hanukkah we light our Hanukkiyot, our Hanukkah menorahs, each night adding another candle, another flame. 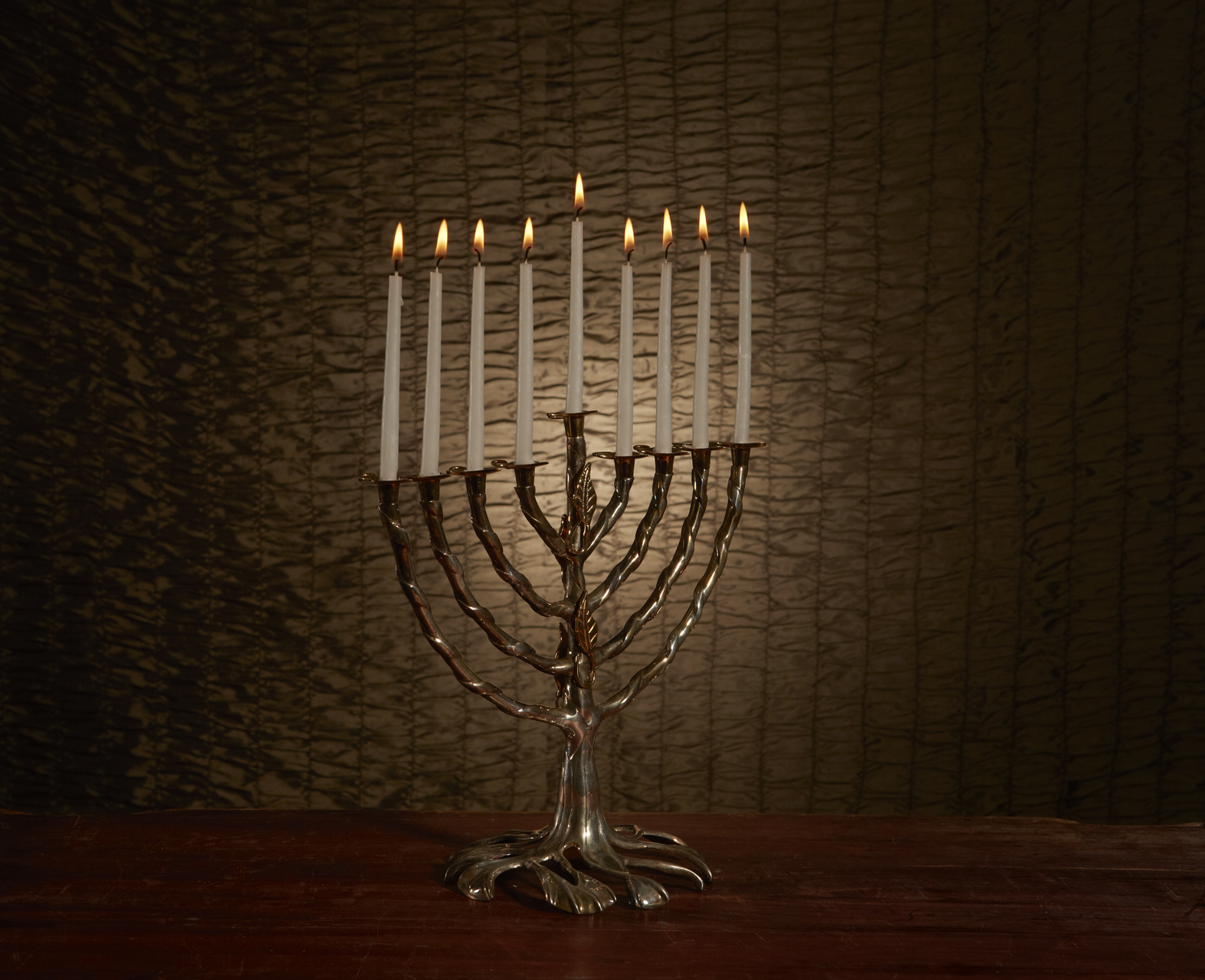 For the last 25 years, I have been teaching 7th graders and their parents about Hanukkah and holding a Hillel-Shammai debate. You see Hillel and Shammai were great Jewish leaders who lived about 2,000 years ago, around the same time as another famous Jew: Jesus. Hillel and Shammai had many debates – hundreds – and this one was about how to light the Hanukkah candles.

As a logical person, not too different from Spock, Shammai said we should light eight candles on the first night and then count down, so each night would have one fewer candle. This made sense. If the oil lasted eight days, then each day, there was 1/8 less, so light 1/8 fewer candles and count down.

Shammai also had another argument in his favor: history.

You see, the Jews had missed their autumnal harvest festival of Sukkot since the Syrian-Greek Army had defiled the Jewish Temple by placing idols and a pig in it and the Jews were pretty bummed about missing Sukkot.

It was and is hehag – THE holiday par excellence – the most joyous! And it was eight days – Sukkot is seven days plus the eighth day of Shmini Atzeret, the 8th bonus day to celebrate.

That is the historical explanation of how we got an eight day holiday when usually we prefer seven. By the way, we know this from the Book of Maccabees, which, while it did not make the cut into the Hebrew Bible, was preserved in Greek by the Catholic Church (even though it was written in Hebrew originally) and that’s how we have it today! Pretty cool!

And another factor supporting Shammai is that the Torah says that the number of sacrifices on Sukkot goes down each day of the festival. So, having the candles diminish makes total sense.

But, Shammai does not win this debate; Hillel does.

Even though he does not have history, logic, or the Torah on his side, Hillel wins.

Because he has the better world-view.

You see: Hillel’s counting up was a reminder that each day the oil still burned was a greater miracle than the day before.

And that beyond the story of Hanukkah, Hillel was pointing us to a greater truth: marbim b’simhah – that we need to try to increase our joy. We need to grow the small sparks of light, wherever and whenever we find them. 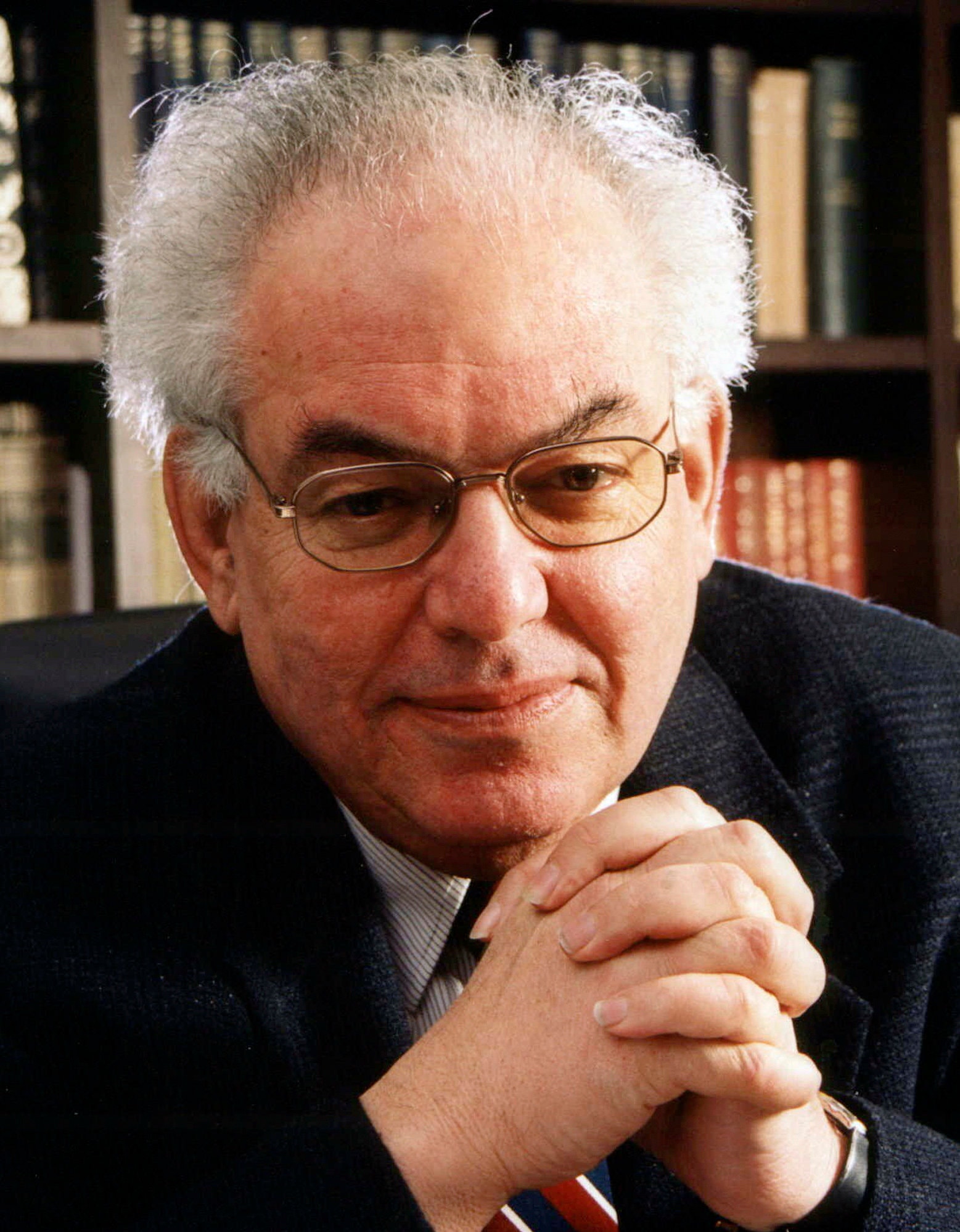 As Rabbi David Hartman, z”l, taught: “The miracle of the first day was expressed in the community’s willingness to light a small cruse of oil without reasonable assurance that their efforts would be sufficient to complete the rededication of the Temple…The ‘miracle’ of Jewish spiritual survival throughout history…may best be described by our people’s strength to live without guarantees of success and to focus on how to begin a process without knowledge of how it would end.”

And since then, we have continued to follow Hillel when we light our lights.

Especially, during this time, this Twilight Zone time that we inhabit, we need to gather up the sparks of light amidst all this darkness. And yes, they are there, when we look for them.

That’s why we light according to Hillel, because each night, we increase the light. Similarly, we want to look around at this dark time of the year, and gather together sparks into a larger flame that can illuminate the darkness to bring us all hope.

This week we saw the vaccine administered to the first people in the United Kingdom; watching the video of those people, I was filled with emotions, tears. After these surreal nine months, there is a light at the end of the tunnel. Instead of four years, the fastest timeline a vaccine has EVER been produced, somehow, miraculously, SCIENCE has produced one in under a year.

A modern Hanukkah miracle if ever there was one.

We are not out of the woods yet. With thousands dying each day, we need to be vigilant.  This will be the longest winter, as we predicted, but yet, to know there is an end, to know that maybe, just maybe by next summer or next fall, life will return to some degree of normalcy, that means a lot.

That gives us hope.

I have started to plan again. To think of shul trips in 2022 to Israel, Abu Dhabi, Spain and Morocco, of an amazing shul-wide multi-generational retreat. To just think of giving each other a hug again. Or just coming back to shul on Shabbat and sharing kiddush. Never will I take those things for granted again. But now, I am starting to light more candles, I am feeling more hope.

Hillel’s 2,000-year-old teaching has helped us endure many, many difficult times throughout the last two millennia: hate, violence, wars, the Holocaust and now this.

And now, we see the lights increasing; may they only spread and grow. 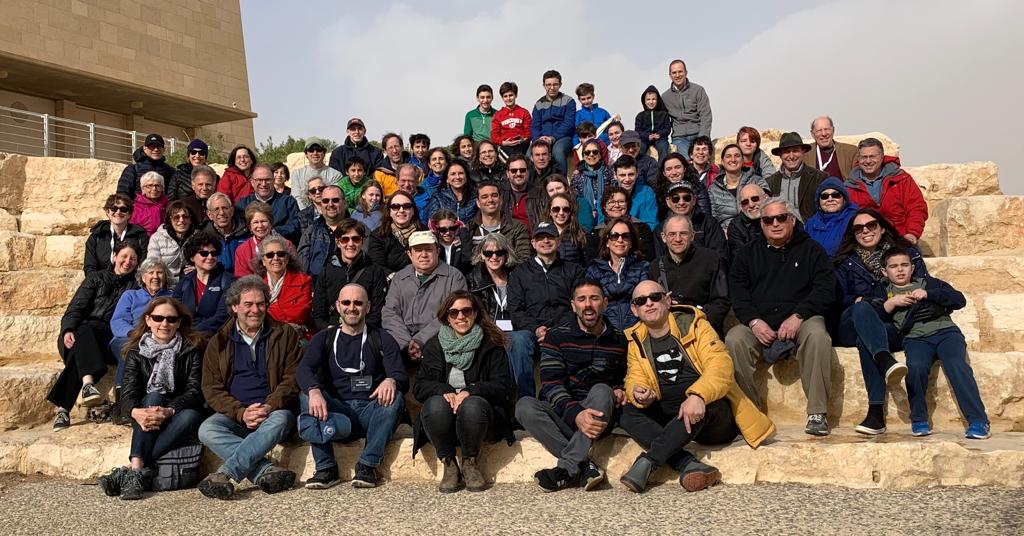 Participants in the Temple Emunah Israel Adventure 2019
About the Author
For the past seventeen years, David Lerner has served as the spiritual leader of Temple Emunah in historic Lexington, MA, where he is now the senior rabbi. He has served as the president of the Massachusetts Board of Rabbis and the Lexington Interfaith Clergy Association. He is one of the founders of Community Hevra Kadisha of Greater Boston, ClergyAgainstBullets.org and Emunat HaLev: The Meditation and Mindfulness Institute of Temple Emunah. A graduate of Columbia College and ordained by the Jewish Theological Seminary where he was a Wexner Graduate Fellow, Rabbi Lerner brings to his community a unique blend of warmth, outreach, energetic teaching, intellectual rigor and caring for all ages.
Related Topics
Related Posts
Comments