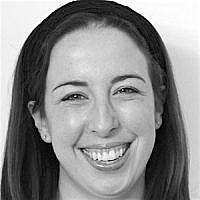 The Blogs
Melody (Mostow) Coven
Apply for a Blog
Advertisement
Please note that the posts on The Blogs are contributed by third parties. The opinions, facts and any media content in them are presented solely by the authors, and neither The Times of Israel nor its partners assume any responsibility for them. Please contact us in case of abuse. In case of abuse,
Report this post.

When I boarded the plane for Israel three years ago, I sat in the airport with my husband of sixteen days, unsure of what awaited us.  Fresh out of college and newly married, we decided to throw our fates in with the rest of Israel and make aliyah.  Now, three years, required army service, a daughter, and many adventures later, I write to you as a proud product of Israel and the United States.  I write to you ahead of November 8th, asking with respect and humility, that you vote against Donald Trump.

The unusual nature of this year’s election highlights the important time in history in which the United States finds itself.  This critical moment is perhaps even more critical, though, for one of the United States’ most strategic and cherished allies, Israel.  With threats ranging from terror at home to terror carried out on its citizens abroad, from rockets to missiles to bus bombs, Israel finds itself at a very serious moment in its 68 year history.

There are thousands of Israelis that, at this very moment, while checking their text messages or playing on Snapchat, could receive a call from their commander, requiring them to leave their wives and children while they return to command posts that are waiting for them, in case of the next war.  Many of these Israelis are my friends, my teachers, my neighbors, not to mention my brother-in-law.  When Israel goes to war, which it has while I’ve lived here, these people all receive calls.  It is a part of their reality.  They are a phone call away from leaving their children and putting on a uniform.  Remember that when you go to the ballot box this year.

So why am I telling you this?  Because I firmly believe that if, G-d forbid, Donald Trump is allowed to sit in the Oval Office, all of these friends of mine — teachers, neighbors, my brother-in-law — all of them will be in a more precarious and dangerous situation than they are today or would be if Hillary Clinton sat in that same office.

Israel sits in an unstable region.  This is hardly a secret.  To have an erratic, unpredictable, careless leader in the White House would subject Israel to unnecessary and gravely dangerous risks.  Israelis will be able to sleep more soundly at night knowing that the president of the United States is someone who will make wise and calculated choices.  In fact, in a recent survey by the Israeli Democracy Institute, Israelis preferred Hillary Clinton to Donald Trump by 9 percentage points, a larger margin than Americans do.

Donald Trump has demonstrated continued carelessness and instability on his campaign, and this is exactly what we should expect if he’s given the opportunity to hold America’s most sacred office.  He has flip-flopped on Israel in the last year alone, announcing that he would “be a neutral guy” regarding the Israeli-Palestinian conflict, undermining any later guarantees he has offered that he will be “very good for Israel.”  He has spoken openly about abandoning NATO allies, promoted more countries acquiring nuclear weapons, and suggested that the United States should commit war crimes.  If such a candidate were participating in a Model UN tournament, this unpreparedness and erratic behavior would seem shocking from a high school student.  This man is running for president of the United States.

Trump’s transparent inability and lack of qualification to serve as president have not gone unnoticed.  Four prominent newspapers, The Arizona Republic, The Dallas Morning News, The Cincinnati Enquirer, and The San Diego Union-Tribune, have all endorsed Hillary Clinton, each papers’ first time endorsing a Democrat over a Republican for president in almost a century.  Of the five living former presidents of the United States, not a single one has endorsed Donald Trump.  This is unprecedented in our country’s history.

For life-long Democrats, the notion that ‘Voting with Israel’ means voting against Trump is hardly problematic.  For the many Republicans, though, finding themselves conflicted and confused this year, the idea of voting for someone with the last name Clinton may seem unimaginable.  I’m asking you to imagine it.  I applaud my many Republican peers and community leaders who have put partisan politics aside to vote for the candidate most qualified to serve as president.  For those of you who have yet to decide, I ask you to consider what’s at stake, not just for your daily life over the next four years, but for the daily lives of your and my brothers, sisters, and children brave enough to wake up each morning in the Jewish State.  Stand with Israel.  Vote against Trump.

About the Author
Melody (Mostow) Coven, originally from Mt. Lebanon, holds a Masters degree in Government from IDC Herzliya. She currently resides in Jerusalem with her husband and one year old daughter.
Comments