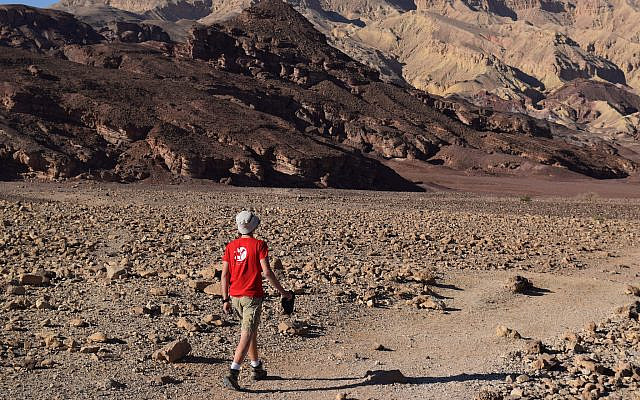 Yesterday, as I was reading through Parshat Devarim, I realized just how perfect it is for my life at the moment. Moshe knows he isn’t going into the Promised Land. After leading the people for so many years, after being their voice for everything, he stands on the precipice and knows that it’s time to let go. It’s time to remind the nation of how far they’ve come; of where they started and where they are heading; of the miracles and hardships that await them in the Promised Land and of the people they are destined to become.

There is so much that Moshe wants to say and impart to the people before they cross over – without him.

I’ve never related more to Moshe than I do now. My oldest son is drafting into the Israeli Defense Forces in two weeks and my emotions are on high alert. I’m antsy and unsettled, nervous and excited. He’s going without us, and it’s time. We’ve raised him for this moment; we’ve spent years talking about it and preparing for it, motivating and imbuing him with the Zionism and idealism to understand his mission and the need for his service.

But now, as he gets ready to step over that threshold, to go it alone, it feels like there is just so much to say – and we’re running out of time. Perhaps, it’s all been said already with the years of love, the family trips, and the values we’ve imparted. But there is that feeling that it’s never enough – and that it’s never going to be enough.

In the parsha, Moshe reminisces with the nation about every moment of bravery, every moment of folly (don’t you remember when?); at home, I find myself going through old pictures and writing letters to my son.

Reading ahead, I see that Moshe reminds the people at one point in Parshat Ve’etchanan, “I am not crossing the Jordan – but you are crossing and you shall possess the good Land. Beware for yourselves lest you forget the covenant of Hashem, your G-d, that He has sealed with you,” (Devarim, 4:22-24). We aren’t crossing with our son; this is the moment when he will truly be on his own; where he is moving away from the family unit and into the army unit that will dictate his daily moves and daily life. Since we are Olim from a vastly different background, we don’t even have our own army experiences to share, our own army stories or words of advice to impart. He is spinning his life, and that of our family, off on a completely new path. He is creating a new story that has yet to be written.

The nation walks into the Promised Land, fulfilling Moshe’s lifelong dreams and the dreams of the people. Our son will, similarly, have our dreams on his back, the dreams that brought us across the world to live here and to carve out a future in this way for our children.

In Parshat Eikev, which we will read the day before he enlists, Moshe says, “…So that you will be strong, and you will come and possess the Land to which you are crossing the Jordan, to possess it and so that you will prolong your days on the Land that Hashem swore to your forefathers to give them and to their offspring – a land flowing with milk and honey,” (Devarim 11:8-10).

We will stand on that precipice in two short weeks, just as Moshe stood there before the people. We will put our hands on our son’s head and give him a bracha, a blessing, that he will be strong and safe; that he will serve himself, his family and his people in the uniform of the Israeli Defense Forces to preserve our Land, flowing with milk and honey. And then we will watch him walk away, as Moshe watches the nation. We will know that he is walking towards his future with our hopes and dreams on his back and his own in front of him and his people.

About the Author
Romi Sussman is a teacher and writer. When she's not at her computer, she's juggling raising six boys ages 9-20 and conquering daily life as an Olah. She enjoys blogging here and on her personal blog at http://aineretzacheret.com.
Related Topics
Related Posts
Comments