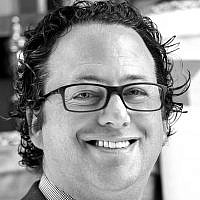 The Blogs
Bradley Levenberg
Apply for a Blog
Advertisement
Please note that the posts on The Blogs are contributed by third parties. The opinions, facts and any media content in them are presented solely by the authors, and neither The Times of Israel nor its partners assume any responsibility for them. Please contact us in case of abuse. In case of abuse,
Report this post.

I have been thinking a lot today about the Biblical story of the Exodus. Specifically, I’ve been ruminating on the start of the story, when “a Pharaoh who knew not Joseph” arose to power and decreed that all Jewish boys should be put to death. The story focuses on one defiant family who rescues a male infant from his demise, with that boy (eventually) becoming the adult Moses who, as God’s mouthpiece, rescued a people, my people, from servitude. While this past weekend I had opportunity to focus on the greater narrative as I gathered for Seder, today I cannot help but reflect upon the initial lines of the text and the many families who did not manage to save first-born sons, the families in mourning because of the traumatic event of Pharaoh’s harsh decree that shaped a people, a narrative, and the entirety of history.

And for good reason. For I am not writing this safely ensconced in my home in Sandy Springs or in my study at Temple Sinai. Rather, I write these words from Memphis, Tennessee, where I have embarked upon a pilgrimage whose many lessons are just now becoming clear.

I am here as a part of a delegation of clergy at the invitation of Dr. Bernice King to observe the solemnity of the 50th anniversary of her father’s assassination. The Reverend Dr. Martin Luther King, Jr. was felled by an assassin’s bullet on April 4, 1968, standing on the balcony outside of his room at the Lorraine Motel. This pilgrimage to that space was in part about optimism, in part about bridge-building, and in part about reconciling the past on the way to healing.

“Look Into Our History To Learn To Embrace Our Destiny.”

Bernice King is an unlikely heir to the legacy of both her father and the movements he supported for two reasons. First, only five years old when he was assassinated, she has learned about her father primarily in the same way that many of her generation learned about her father: through stories told by others. Unlike her siblings who had a more broad collection of memories from which to draw, Bernice had to rely upon her mother, Coretta Scott King, to paint the portrait of her father. Early in life, Bernice grew suspect of the many people who professed close, personal friendships with her father, and struggled to separate the man from the legend. Most certainly knowing that this would be her reality, Coretta took great care in teaching Martin’s youngest daughter about the father she never got to know.

Bernice also had to go through a journey that was filled with challenge, anger and despair to emerge as the leader she is today. For years she was deeply resentful and angry at all white people, whom she blamed collectively for the death of her father, and equally furious at the city of Memphis. Early in her ministry, which she assumed with great reticence, she admitted to herself and through her preaching that she was fuming…at God. She has gone through much healing over the years, overcoming much of the hurt that so obviously still plagues her, in an effort to come to terms with her family’s tragic past.

Unwilling to let herself be solely defined by a moment in history – as impactful as that moment may be – Bernice has leveraged her relationships as well as her resources to launch a new initiative, timed for this moment, the 50th anniversary of her father’s assassination. Dubbed “Better Together,” the initiative started in Atlanta through the King Center, the official living memorial to the life, work and legacy of Dr. Martin Luther King, Jr., founded by Coretta in 1968. Better Together aims to bring together people of faith across denominations to address the polarization affecting society today. Bernice has found the lack of hope and optimism troubling and wanted to tap into the collective wisdom and humility of faith leaders in addressing challenges to the world in which we live. And while she could not have predicted the rise of March For Our Lives, she credits those students with showing the way for faith leaders today, challenging us on multiple occasions to learn from the example of the generation before as well as the generation after how to stand up, step up, and do what’s right.

Journeying to this city to launch Better Together illustrates that, in the tomorrows to come, Memphis can be more than it’s past.

Which brings me back to the morning after the death of the Hebrew first born. Walking the sad path past the sight of Dr. King’s assassination and peering into his room, eerily kept intact exactly as he left it, I began to realize what that first morning must have looked like, must have sounded like, in the wake of the execution of Pharaoh’s decree. I imagine parents finding it impossible to emerge from that moment, families left shattered, and hope all but lost.

To a certain extent that is exactly what coming to this space feels like: a moment frozen in time. And while so much has been accomplished with regard to the dreams – especially the Dream – of Dr. King, we are, sadly, still wrestling with the same issues 50 years later. White privilege entitles me to determine that we have made so many advances; white privilege enables me to believe that conclusion despite the daily reality of what it means to be black in America in the 21st Century. We must still wrestle with siloed opportunity, segregated neighborhoods, white flight, income inequality, an unequal application of justice; an unequal sense of safety during encounters with law enforcement. The conversations have not changed in 50 years; heck, the ashtray in Dr. King’s room hasn’t even been emptied in 50 years. (I understand that the ashtray is left as it is deliberately; I wonder how much of our societal ills are similarly kept as status quo by those who benefit most.)

About the Author
Rabbi Levenberg joined the Temple Sinai clergy in 2006. Rabbi Levenberg was recently inducted into the prestigious Morehouse College Martin Luther King Jr. Chapel Board of Preachers (2017) in recognition of his work in the arena of civil rights. He is the proud recipient of many awards, including the Michael Jay Kinsler Rainmaker Award for his work of inclusion and advocacy on behalf of the LGBTQ community.
Comments