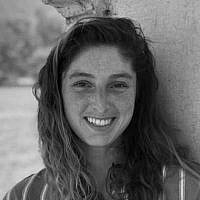 The Blogs
Sara Goel
Apply for a Blog
Advertisement
Please note that the posts on The Blogs are contributed by third parties. The opinions, facts and any media content in them are presented solely by the authors, and neither The Times of Israel nor its partners assume any responsibility for them. Please contact us in case of abuse. In case of abuse,
Report this post.

Last summer, the Standing Together organization opted to viciously promote antisemitic lies over their self-proclaimed values of “equality and dignity for all.” In June 2022, they screened a propaganda film that included misreporting and promoted a false narrative surrounding the riots that took place in May 2021.

Here are the facts.

In May 2021, the city of Lod endured five days of violence targeting Jewish Israelis by Arab rioters. This came after Palestinian Authority leaders made calls for and celebrated violent “resistance.”

Arab rioters blocked major roads in and out of the city by burning tires and large dumpsters. Finally, on the fourth day of rioting, the government declared a state of emergency, and border police were brought in to restore order in Lod.

Jewish civilians were trapped in their homes for five days as Arab rioters terrorized the streets lighting cars on fire and throwing Molotov cocktails near homes and businesses. Those who fled returned to ransacked homes torched by Arab rioters. The film obscures this reality, telling half of the story in some places and completely erasing Jewish suffering in other places.

A film screened by Standing Together titled Testimonials from Jaffa/ Lydda- May 2021 presents a twisted account of the five-day ordeal.  The film, created in joint effort of a number of activists and filmmakers from Lod and Jaffa, including Abd Abu Shahada, Esnat Trabalsi, Hanan Nafar, Philip Blaish, Sekander Kobti, Avi Moghrabi, Hana Amori, Yara Gravely Shahin, Rachel Leah Jones, Liran Atzmor attempts to justify Arab-on-Jewish violence, arguing it is a result of discrimination against Arab-Israelis. A ridiculous assertion considering that Arab-Israelis are integrated into all facets of Israeli society.

The film features testimony from Manal al-Banna, a close relative of Musa Hasouna, an Arab man who was killed during a riot on the second night of civil unrest. al-Banna claims, “a racist Jewish man comes up…sees a bunch of guys gathering and starts shooting his gun at them one of the bullets hit Musa’s heart…Musa wasn’t armed he was not carrying rocks.” While it is true that in the footage of the event, which is not provided in the film, Musa appears to be unarmed, the rest of her account is fictitious. Hasouna was injured and later succumbed to his wounds from a warning shot fired by one of five Jewish men threatened by a group of Arab rioters, two of which were holding or preparing Molotov cocktails. Although he may not have been armed, Musa Hasouna and five Arab rioters also faced indictment on accounts of illegally manufacturing, purchasing, and firing weapons, arson, and interference with a police officer under aggravated circumstances. After assessing the facts, all five Jewish men were acquitted, and his death was ruled an act of self-defense.

This is one of many examples of the film’s twisted narrative.

In reality, the bloodiest of the nights followed Housana’s death as Arab rioters took to the streets chanting “in blood and fire we will avenge the martyr.” Arab rioters lynched an innocent Jewish man Igal Yehoshua, who was stopped at one of many makeshift checkpoints created by the assailants to identify Jewish drivers.

Another testimony featured in the film is from Tamer Abu Kishek, who discusses a cry from the Imam telling the Arab citizens in Lod to come and protect the Mosque from “settler violence.” While many Arab rioters congregated by the Lod mosque out of fear of desecration, this fear proved unfounded as no mosques were damaged in May 2021.

In fact, 28 mosques throughout Israel were used to store weapons, including rocks and molotov cocktails that terror groups ultimately used to target Jewish homes, businesses, and synagogues.

According to the Lod Municipality, four synagogues were burned in Lod by Arab rioters, the fifth attempt at arson proved unsuccessful, and yet another synagogue was vandalized. Video evidence shows the self-proclaimed “protectors of the mosque” leaving at 3:45 AM to light the cars of Jewish civilians on fire. Meanwhile, no attacks or attempted attacks were made against the mosque.

Fidaa Shehada, a councilwoman of Lod and winner of the New Israel Fund award, said that the Lod riots were not violent; she backtracked and claimed that sometimes violence is justified. She has even proudly proclaimed that she wished there had been more conflict. Shehadeh’s efforts to downplay anti-Jewish violence have evolved into attempts to legitimize the violence. Instead of working towards co-existence, Shehadeh has said, “we are a very quiet people, so every ten years we take to the streets, I think it is legitimate.”

Standing Together’s event screening of Shedada’s film got the attention of MK Ruth Wasserman Lande, who reached out to the president of Ben Gurion University. The event, scheduled to take place on campus, was later canceled. Standing Together attempted to relocate the screening to a local coffee shop, which was also thwarted.

Their unapologetic affiliation with Fidaa Shehadeh, who defended violence against Jews, is troubling.

With the commitment to speakers such as Fidaa and the screening of this propaganda film, Standing Together has revealed that its’ true purpose is to delegitimize the State of Israel and perpetuate violence, no matter how many Jewish students are targeted or civilians are lost in the brutal and senseless violence they willingly defend.

About the Author
Sara is a third-year law student at Sapir College and a graduate of Ben Gurion University with a BA in Middle Eastern Studies. She is a CAMERA on Campus and Shulman fellowship alumna. Most recently, she worked as a CAMERA on Campus intern