The Blogs
Kenneth Ryesky
Apply for a Blog
Please note that the posts on The Blogs are contributed by third parties. The opinions, facts and any media content in them are presented solely by the authors, and neither The Times of Israel nor its partners assume any responsibility for them. Please contact us in case of abuse. In case of abuse,
Report this post.

Current upheavals in academia notwithstanding, the case study method has long proven to be an effective pedagogic tool in business schools.  While my own MBA concentrated in Management, the curriculum did include much cross-over from Marketing.  The following case is now presented as but one example of how this ongoing COVID-19 mania can impact entrepreneurship even on the micro level:

Though initially assailed as too extreme, Israel’s handling of the COVID-19 crisis has proven to be highly effective, and its strict social distancing emergency regulations are now acknowledged, often grudgingly, as presciently appropriate.  Israel’s population has been subjected to increasingly stringent limitations on their movements and on their in-person social contacts.

One such emergency regulation is wearing a mask outside of the home; as this is written it is merely a “suggestion” but come Sunday 12 April 2020, masks in public will become mandatory for all people aged 6 years or greater.

A Market Niche for Masks:

Universal compulsory masking is regarded as a very effective way to slow down the WuFlu’s transmission among the population.  For this reason alone, as long as the COVID-19 virus infection remains a significant peril, everyone concerned for the public health should alacritously cover their mouth and nose with a mask when proximate to concentrations of other people.

The physicians and other healthcare personnel who directly treat the COVID-19 patients need the personal protection devices such as the N95 respirator more than the average denizen on the street.  The more specialized devices such as the N95 need to be better allocated to avoid shortages; fortunately, even the “do-it-yourself” masks are effective.

There thus is a potential market for masks which can be manufactured, without the need to comply with onerous governmental specifications, for marketing to the ordinary public by small “cottage craft” operations.

At least one person in Israel taken up this niche opportunity.  As elsewhere abroad, the expatriate Americans and other anglophones in my community here have their social network, now largely online in light of the national lockdowns and social distancing regulations and restrictions.  Ya’arah, the daughter of one of the Anglos in my neighborhood, beset with the cabin fever of confinement to her family apartment, channeled her entrepreneurial spirit by using her mother’s sewing machine to convert various cloth fabrics around the abode into home-made masks of various colors.  After selling out her first batch of masks to family friends, the young lady undertook a second production run and targeted an expanded market in a somewhat broader territory, making use of her mom’s social media accounts. 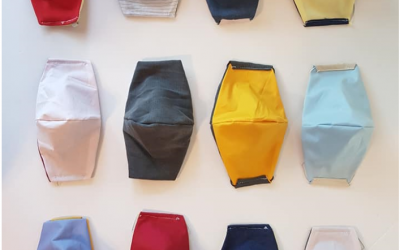 I was one of Ya’arah’s customers.  With the current COVID-19 restrictions in force in Israel, I now will not set foot outside of my apartment, even to briefly step into the hallway, unless my mouth and nose are covered with a mask.  Ya’arah’s product was just what I needed.

There are two compelling reasons why I comply with the masking rule, either of which would have sufficed on its own. 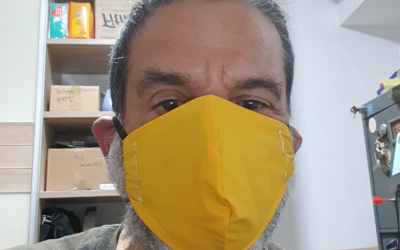 Selfie with a Ya’arah Mask

The first reason is that my wife’s risk of infection stands higher than the norm on account of her being a hospital physician who has passed the magic age of 60, and whose patients are largely if not mostly immunosuppressed; she also has personal medical issues of her own which ever so slightly nudge her susceptibility upward.  Because I live with her, it is entirely possible that I might be an asymptomatic carrier who exhales microscopic droplets of CoronaVirus-bearing droplets into the atmosphere with every breath.  This I wish to avoid.

The second reason is that within the past week I have had published two separate pieces (including the prior posting on this Blog) which  are critical of various personages whose noncompliances with Israel’s social distancing regulations are suspect if not overt and unabashed; I myself must now personally comply with the emergency regulations to the greatest extent practicable.

We do not know whether the government’s future social distancing regulations, whose stringencies have to date only been intensified, will be relaxed or tightened.  There remain many unknowns regarding COVID-19.  Depending upon the virus’s mutation rates and tendencies, and whether a new and novel pathogen enters the picture during this current WuFlu fiasco, the requirement to wear a mask in public may well be expanded.  The time frame for continued compulsory mask-wearing may well be measurable in months or years instead of days or weeks; or even conceivably become the new norm of the era.

It would be quite logical for the mandatory masks rule to persist even after other social distancing rules are relaxed.  For one thing, it makes sense from an epidemiological perspective.  From an enforcement perspective, violations are simple to detect and document; there is no need for a police officer to carry a 100-meter tape measure to determine whether the person is or is not in violation, a camera app on a cellphone gives complete documentation to support writing a citation ticket.  Politically, the rule is an excellent bargaining chip, as in “Okay, folks, we’ll let you travel five kilometers from your home, but you must wear your masks.”

The United States seems to follow suite one to three weeks after Israel institutes a response to the CoronaVirus.  Mandatory masking will come to America; indeed, it has arrived there already.

I need to have more than one mask, not on account of any fashionista tendencies, but to be able to have at least one mask available while another is being laundered.  So I took advantage of Ya’arah’s “buy 4, and get another another one free” special.  I hope that the quantity purchased proves to be an overkill, but still fear that it might yet prove insufficient.

But even if my fears are realized, I remain quite confident that the entrepreneurs of the Start-Up Nation, whether the technologically-sophisticated ones or low-tech ones such as Ya’arah, will avail their solutions to the public.

About the Author
Born in Philadelphia, Kenneth lived on Long Island and made Aliyah to Israel. Professionally, he worked as a lawyer in the USA (including as an attorney for the Internal Revenue Service), a college professor and an analyst for the U.S. Department of Defense. He's also a writer and a traveler.
Comments