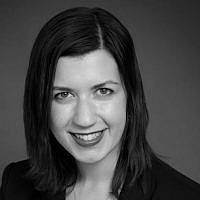 The Blogs
Leor Melamedov
Apply for a Blog
Please note that the posts on The Blogs are contributed by third parties. The opinions, facts and any media content in them are presented solely by the authors, and neither The Times of Israel nor its partners assume any responsibility for them. Please contact us in case of abuse. In case of abuse,
Report this post. 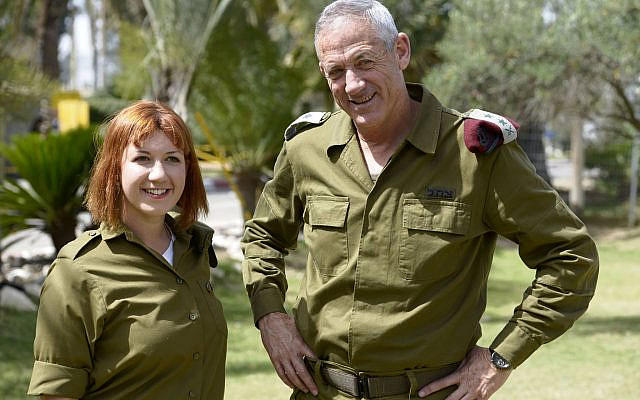 The author hanging out with Benny Gantz back in 2014. Now that he's running for prime minister, she hopes he will make tackling bureaucracy a bigger priority for his administration..

It seems that everyday, Israel is churning out new innovations that are making the world a better place. Thanks to Israel, we’ve long folded up our paper maps and traded them in for the magic of Waze, allowing even the most directionally challenged of us to arrive at the correct destination.

Dealing with an arid climate? Thanks to Israel’s revolutionary drip irrigation technology, it won’t stop you from growing delectable fruits and vegetables. Terrorists firing rockets? Don’t worry, iron dome’s got you protected.

According to the Bloomberg Innovation Index, Israel is the sixth most innovative country in the world. This is quite the extraordinary accomplishment for our still-young state the size of New Jersey.

Yet while Israel has certainly earned its reputation as a hub of innovation, when it comes to day-to-day matters and bureaucracy, the country is still stuck in the 90s. We export our best technology to large foreign markets such as the United States, leaving our own citizens to flounder in a sea of paperwork and long lines.

While no country is perfect, it’s baffling that Israel is able to overcome such complex problems, yet falters when it comes to managing basic bureaucratic tasks. It makes citizens feel like their everyday needs are peripheral, especially when you consider that they should be far easier to manage in comparison to things like terrorism and agriculture. Yet somehow, we’re kicking ass on the big issues and failing on the ordinary ones.

The land of milk, honey and paperwork

Just a couple of weeks ago, I celebrated my seven-year Aliyahversary. I came to Israel as an idealistic 22-year-old from Manhattan, willing to jump through any bureaucratic hoop in my way to live the Zionist dream. Like most olim I know, I’ve encountered a tremendous amount of bureaucracy since moving here – and for personal growth, I have no complaints! It built my character by forcing me to struggle and transcend the limitations inherent in the softness of my upper-middle class upbringing. While bureaucracy never drove me to consider going back to America, I do worry about the impact it has on many other olim and native Israelis, who deserve better. Here’s just a sprinkling of my own (mis)adventures in the Israeli bureaucratic maze. Perhaps some ring true for you, too!

Bureaucracy hurdle one: trying to get drafted among the horse manure

I’ll never forget standing in the horse manure of Kibbutz Naan that first year in my first Israeli job, making phone calls to the IDF in broken Hebrew begging them to let me join the army even though I was exempt.

As I would soon learn, the hallmark of classic Israeli bureaucracy is multiple phone calls to the same number, only to reach a different person and have to repeat my ID number and story all over each time. I was, literally and figuratively, dealing with shit.

Unlike most world governments, who are trying their best to keep immigrants out, Israel welcomes newcomers. So much so that the country actually pays immigrants small monthly stipends, called a sal klita, when they first arrive to ease the transition.

Unfortunately, I realized I wasn’t receiving my stipend when I was off on a pre-army program (called a mechina). In the middle of Kfar Etzion, I called Misrad HaPnim and they explained I needed to physically go to their branch in Rehovot to get this sorted out. In my fearless early 20s, I hitchhiked my way out of Kfar Etzion to pick up different types of ID from my apartment in Ramat Gan, and then made my way to Rehovot. A full day of monumental effort was required to fix a simple clerical error that should have been easily handled over the phone. My time at the pre-army program had been needlessly disrupted.

Eventually I succeeded and joined the army, which turned out to be a kafkaesque journey all of its own. I’ll never forget interviewing for a job in the army in which neither me nor the interviewer knew what job I was interviewing for!

The reality was that the IDF didn’t really know what to do with an American olah over the usual army age with a degree in English literature and ulpan-level Hebrew. The first month, I raked leaves with a British girl. Then, I was placed in a role at the Kirya where I had to approve the construction of various cellular antennas around the country. Yes, this is an actual job in the IDF, and one I failed to do properly due to shaky Hebrew writing skills on technical matters. My dream was to be in the Spokesperson’s Unit, so I filled out Tofes 55 twice to try to move to a unit where I could hopefully be productive and have a meaningful service. Silence. The bureaucratic channels of the army ignored me. Eventually I decided to bypass the bureaucratic machine altogether, and another division opened up a new position just for me, settled on a handshake.

I learned that if you want something done in this country, you need to think outside the box and rely on sympathetic or powerful individuals. The systems themselves don’t work very well and can’t be relied upon.

Fast forward five years. I’m getting married! My now-husband was born in the Soviet Union and therefore his parents don’t have a ketubah, despite being Jewish. So he had to drag his poor 80-year-old grandmother to the rabbinute and have her speak Yiddish to the rabbis to prove matrilineal Judaism. Zay gezunt and my husband was deemed kosher enough to get married in Israel.

Hurray, we’re married! Yet months after the ceremony, we still didn’t receive a marriage certificate. This time, the problem was with me: the rabbinute wouldn’t issue us one until Misrad HaPnim confirmed that my mother is Jewish.

Apparently, it wasn’t enough that my parents were married through the rabbinute in Israel and I showed Misrad HaPnim their marriage certificate (which clearly states my mom is Jewish!). I needed a letter from an Orthodox rabbi stating I’m Jewish from my home community in the US. My family isn’t religious and doesn’t really have ties to such a rabbi, so it took a long time before I found a rabbi that was willing to write this letter. Till this day, I don’t understand why my parents’ marriage certificate wasn’t enough.

The solutions to bureaucracy are already here

The most frustrating part about Israeli bureaucracy is that I know it’s not an issue of technical limitations, but of the government’s will. Technologically speaking, Israel has plenty of innovations that could streamline and digitize bureaucratic processes. Right now, I’m working at an Israeli startup called Lightico that makes me hyper-aware of how a paperwork-free Israel could be a reality, if only government institutions prioritized their own citizens’ time and sanity.

Lightico allows businesses to send a simple text message to their customers’ mobile phone, so they can complete tasks such as, e-signatures, filling out forms, providing important documents and much more. I’m proud to work at a company that’s fighting something that negatively impacts me and every other citizen of Israel. #shamelessplug

There are plenty of other great technologies that are alleviating Israel’s digital backwardness. For instance, Moovit has put an end to waiting around at a bus station, wondering when the bus will come. Missbeez lets Israelis order massages, manicures, and a host of other treatments from their smartphone, and have a professional deliver the service at their home. GlucoMe allows diabetes patients to manage their disease from a smartphone. Intuition Robotics allows elderly people to stay connected to the world and their loved ones through an AI-powered home device.

There’s no end to the number of innovative Israeli startups that are making people’s lives better. The question is, will the government push to bring life-improving technology to its own people’s lives? Or will we continue to watch our own systems falter while no effort is spared to send our best innovations abroad?

Perhaps this election, a politician will finally make the fight against government bureaucracy an issue worthy of his or her time. If they did, they would have my vote!

The government seems to be aware that it needs modernizing, and sometimes even makes efforts to join the 21st century, such as mandating the use of email instead of fax at government offices. Unfortunately, in my experience, those emails never get a reply.