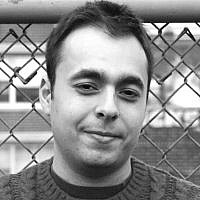 The Blogs
Ophir Tal
Apply for a Blog
Please note that the posts on The Blogs are contributed by third parties. The opinions, facts and any media content in them are presented solely by the authors, and neither The Times of Israel nor its partners assume any responsibility for them. Please contact us in case of abuse. In case of abuse,
Report this post.

It is Theodore Herzl’s Last year of life. As his family falls apart, the political thriller of the Zionist cause takes its toll on Herzl, and he desperately attempts to convince the sixth Zionist congress to support the establishment of a Jewish State in Uganda.

These lines might seem to be drawn entirely from a history book, yet are merely the excuse to translate Herzl’s life to a musical spectacle-The Operatic Saga “State of The Jews”, created by the composer Alex Weiser and Librettist Ben Kaplan.  “There is something about Opera that is bigger than life” says Weiser,  “and from the very beginning, it was apparent to us how Theodore Herzl’s life were epic in that sense as well” adds The Librettist Kaplan. “Hertzl struggled to find his road to success as a playwright and eventually found it as a journalist” explains Kaplan. “He thought of himself in theatrical concept,  he mingled with international key figures and the Zionist congress clearly had that nature”.

I meet Kaplan and Weiser in an office at Yivo Jewish Center, where Weiser works as the director of Public programs. Each time Hertzl is being mentioned their sheer excitement is well apparent, as in Kaplan’s and Weiser’s view, Herzl is a trigger for deeper, profound insights.

“The Politics itself isn’t interesting like the personal history of the characters”, explains Weiser. “We are not interested in telling a story on current politics, nor we have an agenda regarding what our viewers should think about Hertzl” he states. “Our goal is to let the story speak for itself. The question I asked myself is who is going to see this?

Kaplan suddenly smiles, and adds his side of the story. “We all know Hertzl either as this character depicted in history books or the hipster guy with a beard” he laughs. “yet in State of the jews we come across with the story of his wife, Julia who strongly disapproved of the Zionist cause, and was resentful towards how he neglected their family and spent all their savings on the Zionist effort.

I took two years for Weiser and Kaplan to work on “State of The Jews”. Beyond the composition and the historical reconstruction, the duo had to comply with Herzl’s aristocratic standard. “Herzl was designing the Zionist congress like a big opera or a play” tells Weiser. “Within this context, we chose to make State of the Jews an English speaking show with several words in Hebrew and German that will implement the atmosphere in which Herzl and his family lived in” He elaborates. “With it, this show is targeted for Americans and anyone who doesn’t necessarily understand German or Hebrew. If we want them to be emotionally attached to the characters, we must do it in their own language”. 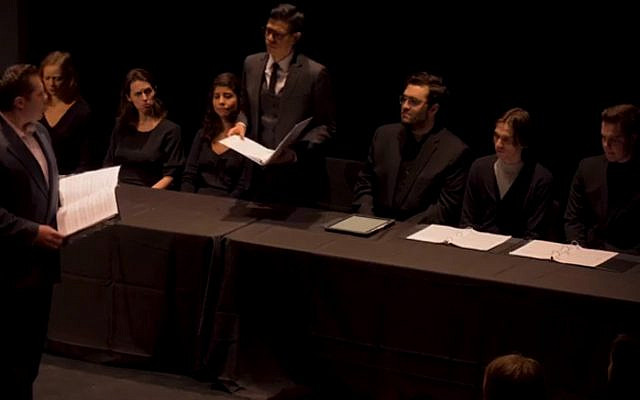 Screenshot from State of The Jews. this opera is a LABA 2nd stage production, and is being shown at The 14th Street Y

State of The Jews would not be possible without the ensemble of 11 Opera singers and actors. While some of them are Jewish or hold early background with the story of Herzl, other cast members are not Jewish-including Hertzl himself. “we were casting the ensemble according to their quality and not their Jewish Decent” declares Weiser. “People were drawn to the characters as they took upon themselves the role. While Herzl is a historical figure, almost mythical, he was a also a very complicated human being, and our aim is to grow the sympathy towards the characters and generate relationships with them, Herzl included”.

What risks are involved in curating an opera on such sensitive subject?

The risks in Opera are enormous” states Kaplan. “We have spent hours working on the first act that ends with the Zionist congress and I thought to myself: this is a slightly different experience than reading it in a history book. The music caught the intensity of the moment of discussing the Uganda plan,  a little bit like the Passover Seder”.

“I think it’s more than that” replies Weiser. “We have a responsibility to be accurate regarding the nuances in which our characters said heir parts and capture the ideology that stood behind it”.

“I agree, there is a fear of oblivion, we don’t want to forget the lost details of the historic tale” concludes Kaplan.

Yet beyond the changes the music has on the emotional impression, it seems though “State of the Jews” has delivered both Kaplan and Weiser with a personal journey on their own identity. “The question of who is a Jew and what makes one a jew, was leading Hertzl’s mind at the time and is alive today for us as Jewish Americans” says Weiser. “It is a fascinating topic, since Herzl started off as an assimilating Jew, An Austrian who admired the anti-Semitic composer Wagner, and transformed into something new” Kaplan explains.  “His personal journey leads to the creation of a renewed Jewish identity, which is something that lingers in the minds of many American Jews”.

What would Hertzl think of today’s Israel?

“This inevitable question has an impossible answer” Kaplan Believes. “I think there was something both idealistic and pragmatic about his figure” adds Weiser. “I find appealing to Hertzl’s idealism and less on board with his realism” Kaplan comments. “He was naive and in a sense, I might be also naive .Hertzl had a big vision that altered people’s lives, and the result is an endless debate-what would have happened if the state of the Jews would exist in Uganda and not in Israel”.

About the Author
From Jerusalem and now lives in New York, Ophir Tal is a Community Shaliach of The 14th Street Y (sent by the Jewish Agency and UJA Federation of New York). In Israel he served in the Military as a journalist in the IDF Newsletter Bamahane , worked in the supreme court of Israel in Educational workshops about democracy, in YMCA and Seeds of peace (facilitation of conflict based dialogues) and as a Journalist in Xnet. Ophir loves Creative Writing, crossfit and cooking Shakshuka.
Comments