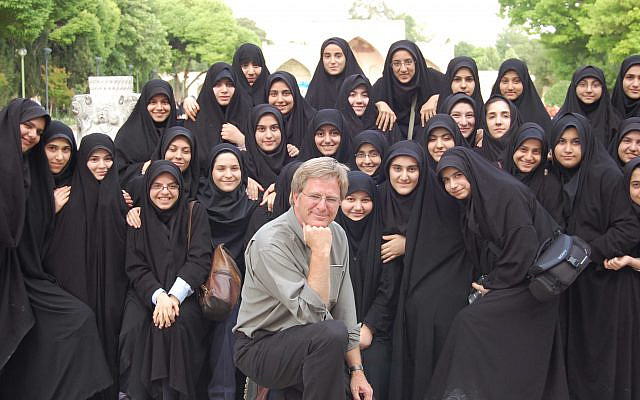 Rick Steves with a group of school girls in Iran. (Steves publicity photo.)

The folks at Stopantisemitism.org deserve an award.

On February 29, 2020, they publicized a video prepared by Rick Steves, the popular and beloved travel guide and writer from Washington state. Their post about the video, which showed Steves speaking to a group of Lutherans in Palo Alto, described Steves as “antisemite of the week” and as “the bigot blogger.”

It was a rough treatment for a man who produces regular shows for PBS, but the fact is, Steves gave his critics ample ammunition to make that charge. In the video, Steves falsely suggests that pro-Israel Jews were able to prevent one of his segments from being aired in New York because it was too pro-Palestinian.

“It never aired in New York because it called Palestine ‘Palestine,‘” he said.

In fact, two PBS stations aired the show in New York when it was released in 2014.

I challenged Steves on Twitter about this misstatement of fact. I contacted his tour company via email. I never got a response to either my Tweet or my email.

It’s not really a surprise.

A few years ago, Steve Stotsky, one of my colleagues at CAMERA, detailed the propagandistic nature of Steves’s treatment of the Arab-Israeli conflict on the PBS show he produced about the Holy Land.

“Captivated by the Palestinian narrative that depicts the Jews as alien colonizers confiscating Palestinian land, Steves portrays Israelis in a clichéd fashion, lacking humanity and warmth, while scenes with Palestinians are more intimate and endearing,” Stotsky wrote, adding that, “Ironically, the only terrorist act specifically mentioned in Steves’s segment was the lone act of mass killing by an Israeli in the past 50 years; that of Baruch Goldstein in Hebron, which was immediately and overwhelmingly condemned by Israelis.”

Steves is up to the same tricks in the video highlighted by Stopantisemitism.org. He talks a lot about empathy, but seems pretty indifferent to the horror experienced by Israelis during the Second Intifada, when Israeli Jews were being blown up on a regular basis by Palestinian suicide bombers.

Steves says no one can accuse him of being anti-Israel, but the narrative he puts forth in the video is that Israel can unilaterally bring an end to the conflict in the Holy Land by according the Palestinians the “dignity” they demand.

But Steves does not come to grips with role that Muslim and Arab hostility toward Jews plays in prolonging the conflict, and he doesn’t address the incitement broadcast by Hamas and the Palestinian Authority toward Jews and Israel. Steves portrays himself as having a full understanding of the Jewish condition in a post-Holocaust world, but his superficial understanding of the Arab-Israeli conflict indicates a troubling indifference to threats to Jewish safety in the modern Middle East.

This indifference is one of the hallmarks of mainline peacemaking activism in the U.S., and Steves is after all a member of the Evangelical Lutheran Church in America, which gave the world the inimitable “Peace Not Walls” campaign. This campaign sets up Israel’s security barrier, a concrete act of Jewish self-defense, in opposition to the cause of “peace.” “Peace Not Walls” doesn’t hold the Palestinians to account for their violence against Israel, but that’s not the point of either Lutheran peace activism or of Steves’s “coverage” of the Holy Land.

It’s all about standing in hubristic and voyeuristic judgement of the Jews and their state.

Speaking of hubristic voyeurism, Steves’s Oct. 2019 video took a particularly dark turn when he addressed the mistreatment of the Baha’is in Iran. “Jesus is a prophet and Jesus is fine and dandy, but [in Islam] Muhammed is the last prophet,” Steves said.

“Now, if you have a religion where your prophet is after 650 [C.E.] or whenever Mohammed lived … let’s say you’re a Baha’i and you consider Bahaullah your prophet, who lived in the 1800s, for you to worship him is blasphemy and you can be killed.”

“I would say yes, it is,” he said. “If you have a Muslim country that’s not a democracy, it’s a theocracy, and in your religion its blasphemous to worship somebody who comes after your guy, you get the opportunity to not allow it in your country. If you happen to be a Baha’i in Iran — keep a low profile! Ha! Or leave!”

Anyone who has the least bit of knowledge of how religious minorities are oppressed in Iran would be disgusted at how Steves used the suffering of the Baha’is for a laugh-line.

In his 2000 book, A Concise Encyclopedia of the Baha’i Faith, Peter Smith recounts the long history of persecution endured by the adherents of the Baha’i faith in Iran. Smith writes of a “‘culture of hatred’ whereby the Baha’i’s are demonized and dehumanized by their opponents” in Iran. While adherents of the faith have been oppressed in Nazi Germany, Egypt, and the Soviet Union, Smith declares that “Nowhere has the same ‘culture of hatred’ developed against the Baha’is as in Iran.”

In the entry on Iran, Smith writes that things were never very good for the Baha’is in Iran, but that the oppression really took off in the aftermath of the Islamic revolution in 1979, when anti-Baha’i groups “enjoyed political influence.”

“Thus, there was a systematic endeavor to destroy all Baha’i organization (including the judicial murder of many Baha’i leaders) as well as to pressurize the rank-and file to apostatize: Bahai’s were arrested, dismissed from their jobs, and not allowed to attend school or university,” Smith wrote.

“Baha’i sacred sites and burial grounds were also destroyed,” Smith reports, adding that Baha’i marriages and divorces are not recognized by the state, and murderers of a Baha’i adherent were allowed to walk free “because their victim was an ‘unprotected infidel.'” Of course, many Baha’is would want to leave, as Steves suggested, but “it is difficult for them to obtain passports or exit visas.”

This was the oppression Steves and his audience of well-to-do Lutherans in Palo Alto were laughing at.

So much for the empathy that Steves talks about.

As a travel guide and writer, or more accurately, a professional tourist, Steves has broadcast a superficial, easily digestible and consumable understanding of life in the Holy Land and the Middle East.

He provides a luxury product for well-to-do affluent Americans who can sit on the sidelines and pass distanced judgement on the actions and suffering of the people in the region. It’s an ironic thing to see from a man who keeps reminding his fans about the need to recognize the humanity of people living in other countries.

Steves’s ugly comments and laughter about the suffering of the Bahai’s in Iran and the distorted narrative he offers about the Arab-Israeli conflict are the end results of making a career of flitting in and out of peoples’ lives and packaging these experiences for an audience back home to luxuriate in.

In the video highlighted by Stopantisemitism.org, we see the hubris and voyeurism that is the hallmark of Steves’s and mainline Protestantism’s brand of social witness on full display.

It’s not about peacemaking.

It’s not about human rights.

It’s about luxuriating in a superficial narrative about the Middle East that allows well-to-do Americans to transform the guilt they feel over living in one of the most powerful and wealthy countries in the world into feelings of moral and ethical superiority.

With his connections to mainline Protestantism and Public Broadcasting, Steves is an important piece of the virtue signaling-industrial complex that has afflicted public discourse in the United States for far too long.