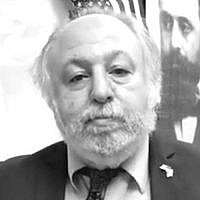 The Blogs
Steve Feldman
Apply for a Blog
Advertisement
Please note that the posts on The Blogs are contributed by third parties. The opinions, facts and any media content in them are presented solely by the authors, and neither The Times of Israel nor its partners assume any responsibility for them. Please contact us in case of abuse. In case of abuse,
Report this post.

When a big city media outlet has its thumb on the scale in its coverage of a news item, it’s a problem. When that news outlet’s readers are unaware of the bias, it’s an even bigger problem. When a reporter or editor – or both – weaponizes that media outlet and turns it against others in the community, it becomes a crisis. When they are caught doing so, yet will not issue a “mea culpa” nor allow the full truth about the episode to come out in its pages nor any truth about it whatsoever to come out on its website – though the biased, weaponized report remains on the website — it is a danger.

I wrote what was to be an op-ed for the Philadelphia Inquirer in response to that newspaper’s/website’s August 23 incitement of resentment and hatred against Jews: a staff-written effort to protect/cover up and even solicit sympathy for an avowed Jew-hater, whom the article portrayed as a persecuted victim of a Jewish cabal. The Inquirer’s news report about anti-Jewish and purportedly “pro-‘Palestinian’” activist Natalie Abulhawa’s job loss is a textbook case of journalism malfeasance – so bad it could be used in every university journalism program in America to exemplify how NOT to practice journalism.

While I pointed out in the op-ed I submitted to the Inquirer numerous examples of bias and imbalance; lack of context and insertion of falsehoods; and the reporter’s pre-meditated anti-Israel bias, there were some examples of malfeasance that I did not have space for – such as noting there was a complete absence of the word “alleged” in the vicinity of any accusations by Abulhawa and the reporter anywhere in the article. Nor did the reporter mention who Abulhawa’s mother is and her decades of anti-Jewish/anti-Israel activity – to name a few.

But after agreeing to consider my op-ed, the paper refused it, citing a “rule” of its own invention that responses to articles be limited to a letter-to-the-editor (the standard being 150 words or fewer, whereas an op-ed is generally in the ballpark of 800 words). Another Inquirer “rule”: It does not publish letters-to-the-editor on its website. Therefore, the original offending article would forever be on the Inquirer’s internet site, but those who get their news and information from the site would never read about the lapses and discarding of journalistic ethics within the article, nor about the reporter’s personal bias. I passed up the offer to get a letter published – even with the editor’s concession that my letter could be longer than the standard word-count.

And so below is my op-ed. I am intentionally NOT linking to the article I wrote about so as not to give it any more oxygen. But one can search for it online and see it for oneself. I highly recommend reading the profile of Natalie Abulhawa over at Canary Mission – a website that does valuable work – at: https://canarymission.org/individual/Natalie_Abulhawa to see exactly who the Inquirer has gone to bat for.

Working headline: Seeing Red Over ‘Blacklisted’ (the headline of the print-edition of the Inquirer article was “Blacklisted”.)

A reporter who made a public pledge to deliberately slant her coverage in favor of “Palestine” writes an article in support of an anti-Israel activist. Can readers expect objectivity, balance and transparency that are supposed to be the hallmarks of a respectable media outlet?

On Tuesday, August 23, the Philadelphia Inquirer published a feature article by Massarah Mikati on the front page of its “The Region” section headlined “Blacklisted” about anti-Israel activist Natalie Abulhawa who lost her job – allegedly due to her activism.

The article violated many journalistic standards: Lack of balance — Mikati included only sources and examples that represented a singular point of view; there were inaccuracies and misrepresentations; Mikati injects her opinions as facts; and Mikati did not disclose that she signed “An open letter on U.S. media coverage of Palestine” littered with lies about the Jewish state and which declares that journalists who signed will promote the Palestinian-Arab narrative in their work to counter their claims of rampant media bias in support of Israel.

The letter Mikati signed concludes: “We have an obligation — a sacred one — to get the story right. Every time we fail to report the truth, we fail our audiences, our purpose and, ultimately, the Palestinian people.”

It is not the role of a journalist covering news to support or help “the Palestinian people” although that is what Mikati does in her news article about Abulhawa. Mikati fails her audience, fails the newspaper and fails the profession by failing to report the full truth.

When a reporter is too close to a subject, he or she is supposed to recuse himself or herself to maintain the requisite journalistic integrity. Opinions, agendas and bias – those are left to the columnists, editorial writers and op-ed contributors. Newspaper management must ensure this. Failure here misinforms and misleads.

The more controversial or contested a subject or issue is, the more vitally important is the need for objectivity, balance and accuracy.

There are few subjects or areas more controversial and contested than Israel and Jewish self-determination or Zionism. There is no other country in the world whose very existence routinely remains in question; no other nation faces the variety and severity of vows to annihilate it; no other place is under such scrutiny; and there is no other people who have faced the continuous incitement of hatred and resentment and the persecution and violence the incitement sparks as have the Jewish People.

Rather than try to bring clarity to readers, Mikati and the Inquirer seem to want to turn them into political pawns. Biased reporting about Israel – the nation-state of the Jewish People — stirs more Jew-hatred and resentment.

Some examples from Mikati’s article:

They don’t call for elections in the areas controlled by the Palestinian Authority and Hamas; Abulhawa and others do not protest for an end to well-documented corruption and theft of international aid money by Palestinian-Arab leaders; they are not demanding an end to the official incitement which instills Jew-hatred and denial of Israel among successive generations of Palestinian-Arabs; they do not call for an end to attacks against Israelis that compel Israeli governments to respond with force to protect Israeli citizens.

What Abulhawa and the others are is anti-Jewish, anti-Zionist and against the existence of the only Jewish state.

Rhetoric attributed to Abulhawa by the watchdog group Canary Mission that Mikati omitted from her article includes:

Mikati claims in her article (unattributed to anyone, and thus her opinion): “[A]dvocates for Palestinian rights [are] being silenced and retaliated against for their views, particularly because support for Israel is dominant in American discourse and politics.” Mikati makes support for Israel, America’s most reliable ally in the Middle East, seem sinister. Where is her evidence that critics are being silenced? In fact their voices are widely read and heard today.

Mikati quotes an academic who claims that America’s “foreign policy is to blindly and unconditionally support Israel’s state policies and practices, even if those practices and policies violate international human rights.” Another lie. More incitement.

Mikati neglects to include reaction or quotes from Israeli officials, nor from any local Israelis or pro-Israel activists to rebut those allegations, nor to explain how painful social media posts attributed to Abulhawa and others are. Mikati did not acknowledge that such rhetoric can incite and inflame Jew-hatred, and that attacks against Jews and Jewish institutions in America are at or near record numbers, and that by far Jewish people are the most preyed-up religious community in America according to the FBI.

Zionism is not – as the writer claims – “the national ideology of Israel.” The movement pre-dates the re-establishment of Israel by 50 years. As a vital element of the Jewish religion, Zionism (at its essence settling the Land of Israel) is as old as Judaism itself.

It will be up to a court to decide the merits of Abulhawa’s lawsuit in response to her termination from her job, and both sides will have an opportunity present their case. The Inquirer and reporter Mikati offered only one perspective to the court of public opinion to try to influence readers to have sympathy for an anti-Israel activist. That is not the role of a newspaper and its reporter.

About the Author
Steve Feldman's first taste of Israel was in January, 1991 as the nation prepared for what would become the Gulf War and then a week's worth of Scud missiles. He is the executive director of the Zionist Organization of America's Greater Philadelphia Chapter and spent more than two decades as a newspaper reporter.