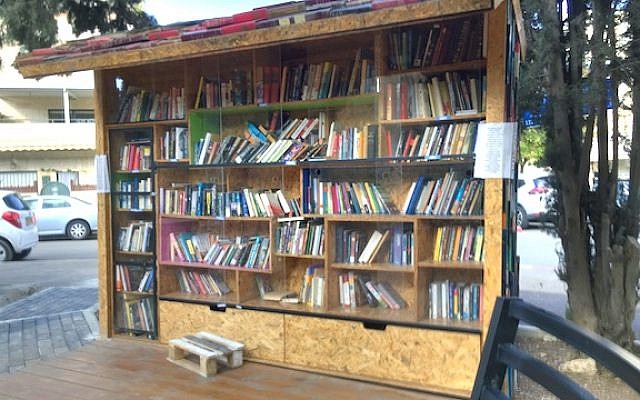 There’s a new phenomenon in arts and literature popping up throughout Israel. In music there are numerous house salon concerts, where musicians can play the music of their choice (usually forward looking) and receive reasonable audience contributions. At the same time, neighborhoods all over Israel have “taken the bull by the horns” toward beautification, enshrining their previously drab environments with something aesthetic. This can be a small public garden, benches for meeting, promenades, etc. Most recently small public free libraries, often called “street libraries”, have been appearing in Jerusalem, one of them near the Moshava near Emek Rafaim, and the newest, in Talpiot/Arnona at the end of Beitar/Leib Yaffe next to the Shai Agnon Synagogue.

This “oasis” has seemingly appeared overnight, like manna from heaven, but it took the imagination and hard work of a group of neighborhood women to make it happen.

As in most of the “street libraries”, all taking and returning is done by trust. No lists. No ID cards. The corner is also lit at night, and is built on a terrace of wood lined by the most beautiful and inviting round bench. Not only does this new facility have practical value (i.e. books and knowledge), but also functions as a meeting place different citizens of the neighborhood. The street library’s ideal of sharing and trusting is stimulating human interaction in other deep ways.  The founders envision the building of positive social change, as well as raising the quality of life in the area.

There is one example from the past that also worked to cultivate sharing: traffic circles. Such seemingly innocuous additions to our roadways, complex as they are,  actually simplify  driving, clarity of direction and cooperation between drivers (i.e. yield of right of way).  It’s almost a driving lesson in disguise. (You read more about this in the author’s blog TOI –  Towards a Kinder Gentler Nation   )

The new Talpiot/Arnona Street Library was made possible through the hard work of a group of neighborhood women. According to the project’s poster, there was financial assistance by a number of organizations: Great Baka Community Council (coordinating), Keren Eden, Street Library Jerusalem, Taawan Makom, Hebrew University, and The Culture Department of the Jerusalem Municipality, the European Union, and others.

The structure was built from old books donated by neighborhood members, with a strengthening frame made of wood and metal, with plexiglass stands and panels. There are LED lights above which are automatically triggered. The entire presentation is sculpted and elegant. It could very well serve as a model for other street libraries throughout Israel.

There are two examples of locales where street libraries are vital part of culture. The first is Australia, which encourages it citizens to construct small private libraries (that sometimes look like dollhouses) located near their home.  They neighbors share freely, or anyone else that passes by.  This can be readily found in such Australian cities as Brisbane, Canberra,  Canberra Little Street Libraries and many others. In addition, many African nations are finding how local street libraries can improve literacy.  Street Library Ghana  is a prime example.  Also are is a project to combat poverty ADT Fourth World and the  APC libraries . 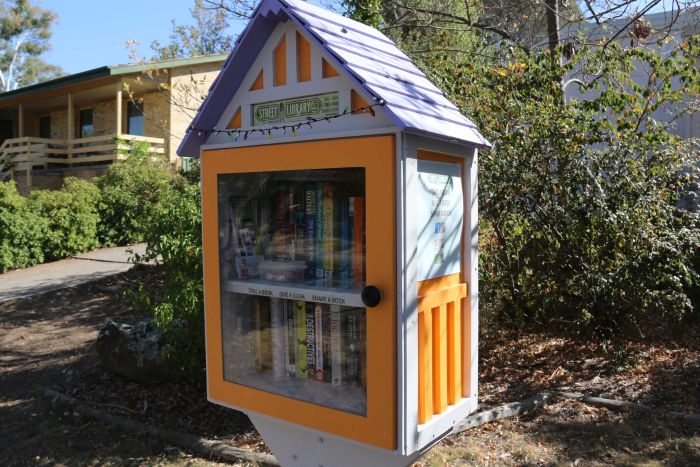 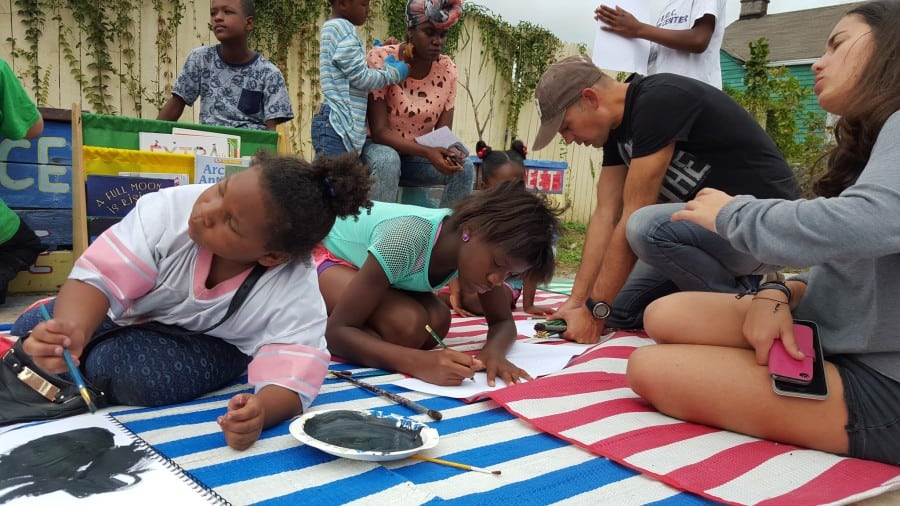 Street library in Ghana, and activities around it

For those of us who have become stilted in our belief that we are hindered or powerless to create positive social change, a project like the street library and its culture of sharing, might change your mind.   It’s a sweet spot, an oasis.  It is smack dab in the middle of a neighborhood that boasts of great writers like Shmuel Yosef Agnon (Shai Agnon) and Josef Klausner. See Aviva and Shmuel Bar-Am’s wonderful blog in TOI, 2016.

The library entry sign reads: “The library was initiated by a group of local women, in cooperation with the Great Baka Community Council, as a “Jerusalem Placemaking” project.It was designed by with recycled books to help preserve the environment as well as honor the legacy of the famous literary figures who lived in the neighborhood. You are welcome to borrow and donate books in good condition and plan events and activities for the community.”  (Pictures below” Street Library, Talpiot/Arnona, courtesy of the author) 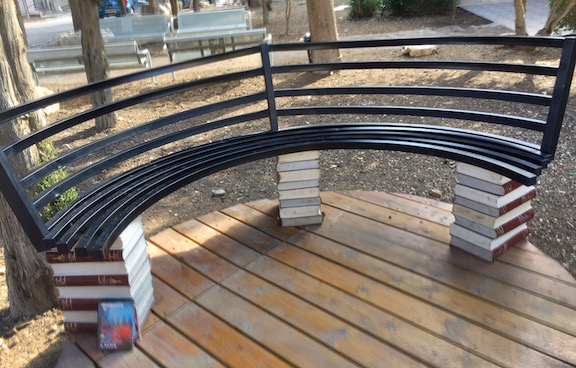 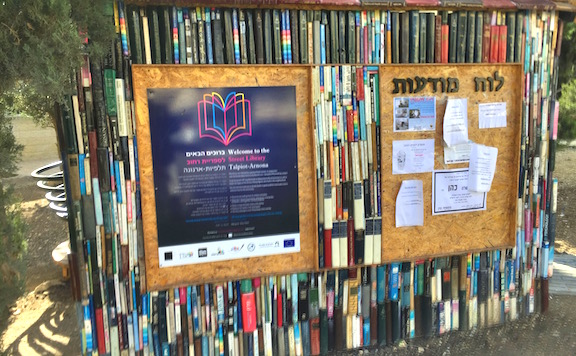 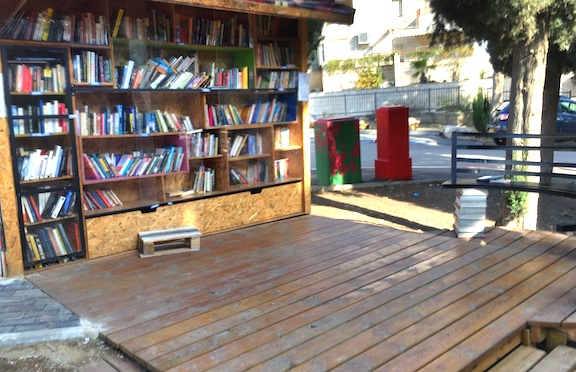 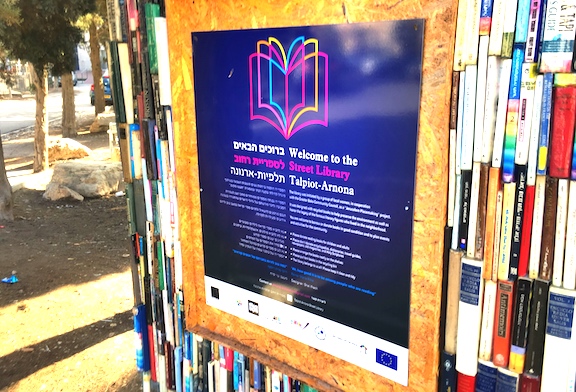 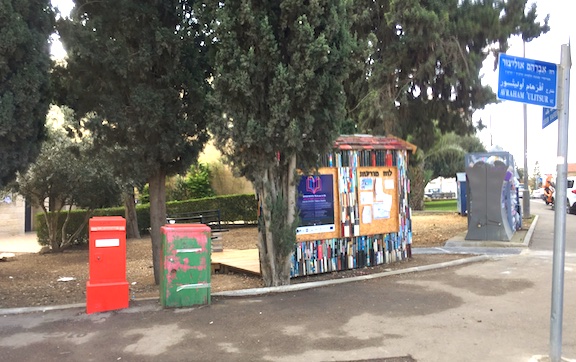