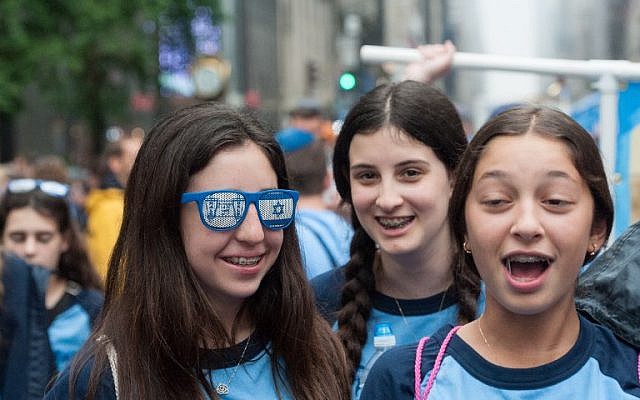 People participate in the Celebrate Israel Parade in the rain on June 5, 2016 in New York City (Stephanie Keith/Getty Images/AFP)

A recent American Jewish Committee poll on the relationship between Israelis and American Jews demonstrates the widening gap between the two communities. Just a few examples:

These numbers are certainly a basis for concern, but I believe we can learn from them to develop a strategy to heal the wounds and strengthen this critical relationship.

A panel that I moderated at this week’s AJC Global Forum in Jerusalem provided some ideas which I believe can serve toward that goal.

Former Knesset member Dr. Einat Wilf analyzed the issue of mixed-prayer at the Western Wall to point the audience of Jewish-American leaders in a different direction.

She noted that the overwhelming majority of religious Israel does not support the idea of a mixed-gender prayer section at the Kotel. Mixed-gender prayers go against what has been done historically and traditionally in the Jewish faith, and they don’t want to see this changed at such a holy location.

Secular Israelis may support the philosophy that all people should be able to choose how and where to pray, but the issue of the Western Wall is not one which weighs on them personally, and thus they are not natural partners for a massive legislative battle in the Knesset. Wilf urged US Jewry to back away from the Western Wall battle and instead focus on issues in which they will find eager and enthusiastic partners in Israel.

Which issues? Wilf suggested the dismantling of the Chief Rabbinate. The Orthodox rabbinate’s control of religious life most certainly raises the ire of mostly non-Orthodox US Jewry, but it also directly impacts the life of non-religious Israel. The rabbinate controls lifecycle events, the country’s Sabbath and Kosher observance, and the country’s conversion policy. There is a massive outcry from broader Israel on this issue, one that can serve as a basis for the two communities working together.

Dr. Michah Goodman, who heads Beit Midrash Yisraeli, a pluralistic center of Jewish study, made an additional point regarding the weakening Israeli-Diaspora relations. He said after the Six Day War, US Jews revered Israel and for decades saw Israel as great and a basis for pride. That has since worn off – especially in light of the differences of opinion between the two populations. But we are still family.

The AJC poll revealed that 78% of Israelis see Diaspora Jews as members of their family, and close to 70% of US Jews feel the same about Israelis. So we cannot simply cut off the relationship, rather it must mature with each side finding ways to help the other. As panelist Uri Misgav, a Haaretz journalist, pointed out, Israelis must embrace US Jews even when they are critical of Israel’s policies, and US Jews must support Israel even if they disagree with its policies.

It was important for me to make one crucial point to this influential audience. The trend in Israeli society is working in favor of a significant acceptance and openness on issues of religion and state. The only reason why progress is currently being held up is because of the ultra-Orthodox political parties playing the role of coalition kingmakers, and vetoing any legislation changing the status quo.

But as more and more young ultra-Orthodox men enroll in higher education, enlist in the IDF, and enter the workforce – and we are currently at all-time highs in all three categories – they become more moderate and do not vote for the old guard and their policies. This is why polls show that the ultra-Orthodox parties are not increasing in numbers despite their community growing way beyond the birthrate of the rest of Israel.

As long as US Jewry remains engaged and considers a strategy of investing in programs which encourage and facilitate ultra-Orthodox integration into Israeli society, then not too far into the future, the political reality in Israel will allow significant legislative changes to enable US Jewry to feel more welcome and accepted in Israel.

A dream of 2,000 years has come true. The Jewish people has returned to its biblical and ancestral homeland. And we are a mere 70 years into this new development called a Jewish and Democratic state in the 21st century. History will judge very harshly any mass disengagement from Israel by Diaspora Jews at this point in time. Simply giving up is not an option. Jews on both sides of the ocean must remain completely engaged – standing up for their beliefs and wisely charting a course of partnership and brotherhood.

So let’s get to work!

About the Author
Dov Lipman was elected to the 19th Knesset in January 2013. He is the author of seven books about Judaism and Israel, and holds rabbinic ordination from Ner Israel Rabbinical College and a masters in education from Johns Hopkins University. He has been at the forefront of combating religious extremism in Israel and is a leader in efforts to create Jewish unity both in Israel and around the world. Former MK Lipman is invited to speak on behalf of the Jewish state both in Israel and around the world and serves as a political commentator for i24 News and ILTV. He currently serves as Senior Manager - Community Outreach for HonestReporting.
Related Topics
Related Posts
Comments