Another store closed. No bus. Nothing for dinner. Stupid Shabbat, I would mutter, under my breath.

You see, Shabbat and I have had a complicated relationship. It’s not Shabbat, it’s me. I converted, you see, 26 years ago. Having been raised by liberal hippie parents from Berkeley, I really knew very little of any religious ritual whatsoever. My parents tuned in, turned on and dropped out. To a very rural town in which the New Age populous was approximately 85%. I think I had one Jewish friend and I was pretty sure he’d probably been in “Fiddler on the Roof” since that was about my entire knowledge of Judaism to that point.

Fast-forward many years, and the first Jewish wedding I ever went to was my own. Even though the rabbi explained everything ahead of time, you can imagine my mystification and delight at this strange new ritual. I knew my new husband had to step on a glass, so I bought a lead crystal glass from Robinsons – figuring it should be a NICE glass. Wrong-o. I just thank God he didn’t hit an artery.

After my conversion and marriage, my then-husband and I began to light the Shabbat candles, and as converts are wont to do, I made elaborate Shabbat dinners; with soup, homemade challah, chicken, potatoes, vegetables, desert, Shabbat was an event. We raised our children in this way, but as happens to most parents, over time we grew weary of making a production out of everything and observing Shabbat became unusual.

After I was divorced, I wasn’t sure if I was still Jewish. I had just lost my Jewish family (my in-laws), and I really wasn’t sure if being a divorcee would in some way get my Jewish license revoked. I wasn’t sure who I was or how I should live my life. Many Shabbats and other Jewish holidays came and went, and I didn’t observe them. What was the use? It was no longer for the kids.

Then, one day, for a reason I can only describe as being moved by spirit, I bought some Shabbat candles and candle-holders. And that Friday, I lit the candles. I don’t know what made me do it. Maybe it was because I had been visiting Israel often and seen that Shabbat there (here, now) was important. I lit the candles not for my rabbi, not for my (ex) husband, not for my kids – I lit them for me, because on Shabbat, that’s what Jews do. It was a wonderful feeling. 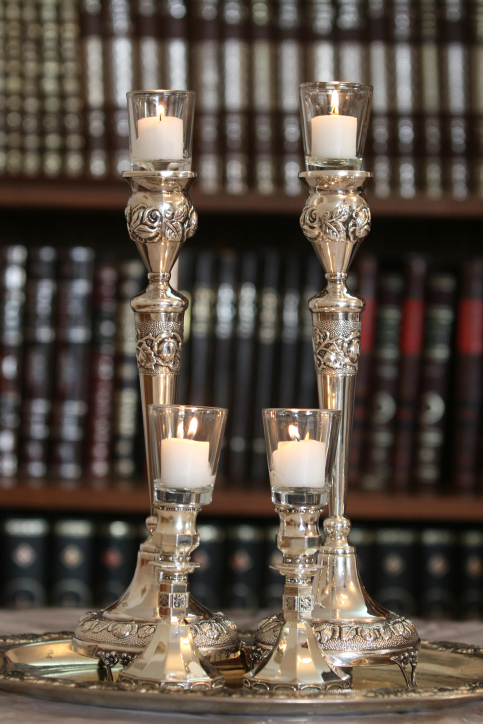 Then I came to Israel, where you can feel and be Jewish whether or not you practice or observe anything at all. It’s like a Jewish Disneyland! Every Shabbat, I forgot it was Shabbat. Every single week for some time, I was surprised that the stores and restaurants were closed. Stupid Shabbat, I’d mumble as I walked back home sans dinner, groceries or whatever I had sought. What an inconvenience Shabbat was!

All day Saturdays, I’d wait for stuff to reopen so my life could resume.

Then, one Friday morning, it happened. Hey, tonight is Shabbat – I’ll shop and do errands NOW. I’ll prepare for Shabbat! What a revelation! I had just joined the other seven million Jews in Israel who can keep track of the days of the week. I’m a slow learner, what can I say?

What a nice Shabbat that one was – with abundant food and supplies. Now I could actually relax on Shabbat, instead of resentfully waiting for it to be over. So I spent a few Shabbats like that, prepared and quite pleased with myself.

I made aliya only a few months ago, from Los Angeles. I am a go-go, get-things-done American, used to multi-tasking and to compensating, on some days, glossing over my life in a hurry. Coming from the crazy Tinseltown hamster-wheel to Israel has been a huge change, to say the least. And now, something more is beginning to shift in my relationship with Shabbat, beyond acceptance of it. I am starting to rest on Shabbat. Don’t get me wrong, I don’t lie on a fainting couch, or study Torah, or fan myself while drinking a chilled glass of Arak – I just don’t work. I don’t cook because I am prepared for Shabbat. I don’t shop because I am prepared for Shabbat.  And more and more, I stay off my computer and don’t do my other work, either. Because it’s Shabbat. And Shabbat is a different day. It is a break in the routine, a reason to slow down.

My annoyance that Shabbat is observed so widely and decisively in Israel has been replaced with another feeling – appreciation. Too bad that in the US there is no day of rest that is observed by all. Sure, in the US, Sundays are a bit slower. A few fewer stores might be closed. In America, Sunday is traditionally a day when one might stay home, watch football and do the laundry. But it’s observed casually. You don’t have to do that – 95% of the stores you’d usually do your errands at are open, so you have a choice.

Here, Shabbat is enforced by tradition. I never thought I would think this, much less say it aloud – but me and Shabbat? We get along just fine now.